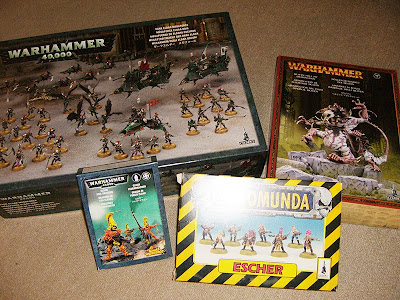 Hey guys, with 2011 now gone it's time for a glimpse in the future. 2011 was mainly Skaven from me, around 2500 pts planned resulting in a Skaven typical massive model count I needed to tackle. In 2012, I need to finish my Hell Pit Abomination, my Skavenslaves plus another unit of Giant Rats and Clanrats and some characters. This should take a couple of months.

For change, I'm going to toss some Eldar models inbetween like the squad of Fire Dragons you can see above. The next big project will be an Escher gang for Necromunda. I've bought the full range for like 35 Euro some years ago on ebay but since then they've collected dust in my cupboard. But in the next year I will finally do those classic Jes Goodwin sculpted beauties the proper justice.

I guess it might be late Summer when I'm through them, so afterwards it will be a couple of Dark Eldar, I've still got a bike squad for my Ultramarines on sprues, and I heard we might see a new Eldar codex around christmas so I'm keeping my breath for new plastic jetbikes, which I need a lot of for my Saim-Hann warhost...

So what are you up to in 2012 in terms to our hobby? Tell me in the comments!