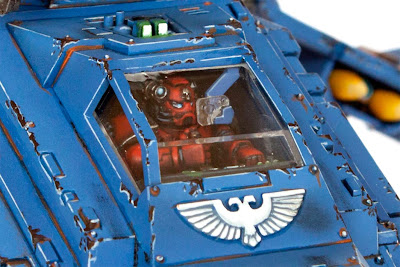 ++Incomming vox comm++
This is Brother Techmarine Edictus, requesting permission to land.
Proceed through the jump to the landing zone for the full debriefing. Bless the Omnissiah. 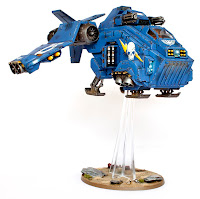 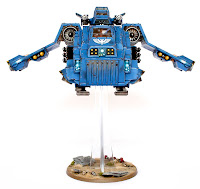 Why should Blood Angels and Grey Knights have all the fun? You might have guessed by now that I love the big kits from Games Workshop and when they brought out the Stormraven I just had to get one. 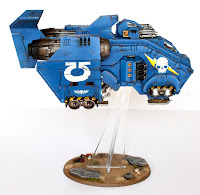 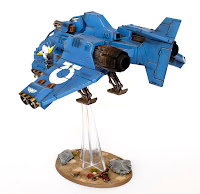 There are a lot of people who don't like the design of the Storm Raven, but I really like it. It looks like a flying fist. It looks armoured and it looks like it's capable of vertical take off and flight with jet engines and vertical take off thrusters. Now, if I did have to pick one design flaw, then it would be the position of the hurricane bolters, the bottom pair of bolters can't draw line of sight through the front fairing. 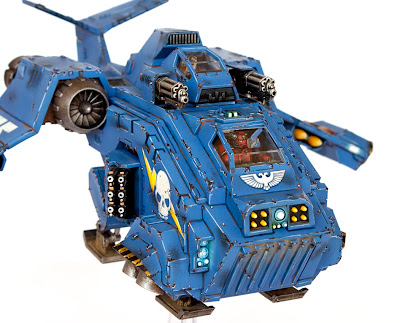 I used lots of weathering tricks to stop the model looking like a flying plastic lego brick. After the airbrush basecoat and highlight, I painstakingly lined all the armour joins/creases with a dark blue. Then with a rusty colour (mixing orange and browns) I painted around the rivets and into some of the creases. Then using a dark brown I painted on the chips. The key here is to put them in logical places, so corners that catch on things make the most sense. Also bunch up several smaller chips instead big chips. I then under highlight the chips while I'm edge highlighting the blue armour. I then dry brush black paint on lightly for smoke/explosion damage, I also do this for heat and exhaust damage too. Do this very lightly and try to keep it subtle. Finally using weathering powder I dusted the landing gear and the edge of the assault ramp. Once again this is common sense placing as the ramp would have hit the dirt. 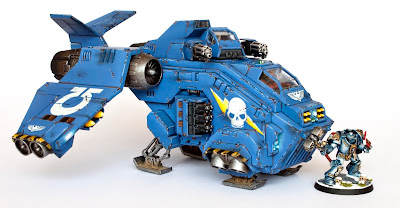 I really like this paint job on the Storm Raven. It's contemporary with it's weathering and chipping but it's also old skool with it's lightning skulls, hazard lines and yellow missiles... I had to restrain myself from painting all the weapon casings red! I feel the big freehand paint jobs on this piece really help to add character and interest to the piece. It certainly breaks up all that blue.
I have one of these to add to my Grey Knights which I might work on soon. Do you guys have any Storm Raven pics that you've painted in non-Grey Knight/Blood Angel schemes? What would be the best colour for the Storm Raven?