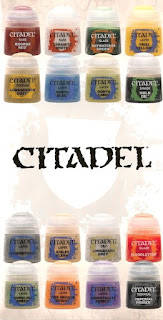 Heya, good people! Two weeks ago, when the new Citadel paints were presented to the public, I travelled down to the next GW store to have a look at them. Here are my opinions and observations on the new range.

First off, a bit of background about where I come from when it comes to paints. I've been using GW paints for quite a long time, starting with the hexagonal base flip-top ones manufactured by HMG Paints (the guys who make Coat d'Arms paints and many more nowadays). I use paints sold by GW, Vallejo, Coat d'Arms, P3 and a bunch of others. They all got their advantages and none of them are bad, they just have to be handled right. So I like to think of myself as having little bias in this regard.

Now that we got that out of the way, let's start with the little review. So it was Saturday, not too many people at the store, great. As soon as I entered the friendly staffers offered me a chair and a Space Marine on sprue (primed black) to try out the new paints. Along with that I got a little folder (see above) along with an introduction the redshirt had given about a hundred times before that day about the new categories of paint GW were about to introduce. 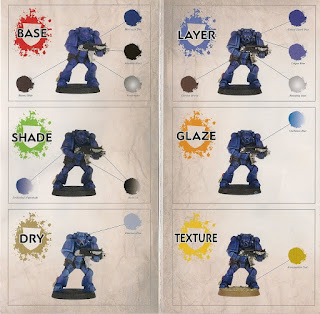 Above you see a scan of the insides of the folder, again showing the way the new paint categories are meant to be used. It's a step by step tutorial on how to paint a blue Space Marine to a nice level using the new paints.

Base - Just to show that I'm paying attention, I asked "Ah, just like Foundation Paints now?" and the redshirt (and manager) were quick to add "Sure, sure, but BETTER.". I know that these people have orders from above but having a chat with GW employees often feels weird. Anyway, it's Foundation Paints but they are way different now. First, they don't have the pastell-like colours any more but are strong colours on their own now. They also have less of a texture and are about as thin as regular paints now. They still cover very, very well. Good stuff.

Shade - Those are Washes. They seem to be of the same quality as the current Citadel Washes are (which means very good.).

Dry - Those are the first odd ones. When you open those, your first reaction is "oops, did I not close the paintpot properly again?". It's essentially goopy, dry paint. I get what GW were trying to do with that and I guess it's working in the way that people who are new to painting often get drybrushing wrong in how they don't really wipe all the paint off the brush. You also save on paint this way because you won't have to wipe off as much. Still, these didn't really convince me.

Layer - These replace what now is the regular GW acrylic paints. I only tried one of those but it looked very nice and also covered very well. Looking at the palette they got a lot of shades of green now, which is good of course. The range of browns, blues and greys I'm not sure. I haven't had a look at the whole range of course because they only had a few sample pots set up but those might still be a little lacking, depending on how well the various shades go with each other. (IF you use GW paints exlusively that is of course.

Glaze - I did not get to try those (just on my finger) and they basically seem to be thinner Washe- sorry, I mean Shades.

Texture - Now apart from the Dry paints, these stand out the most for looking a little bit ...well, unessential to me. It's what seems like paint with gravel mixed in but not as rough as sand, more like pretty hard clumps of paint. The idea behind those is that instead of glueing sand, pebbles and so on to the base to create a natural-looking texture you just slap on some texture paint. The thing is that when I tried it on a base There was too much paint and too little texture on the base so you probably have to give it a few tries and/or layers of that stuff until you get a satisfying look. Vallejo and probably a few other manufacturers have been selling materials like that for years although I never felt like I need them. And especially at the price GW charge for a pot of those, I don't think that I would make much use of them. I can however imagine them being used to great effect to do mud or dried earth on tank tracks, boots, wheels and so on.

So these are the new categories of paint GW introduce. As we all witnessed over the past weeks, GW is making a big thing of the introduction of the new paints. Apart from this leaflet you can see above they're giving out how-to-paint-your-unit cards (about the size of a playing card, you can see the front side on the left and the back side on the right): 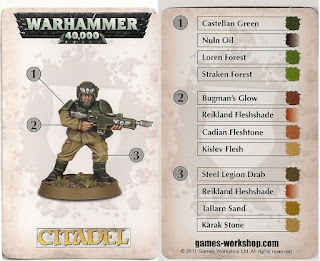 The redshirt told me that they're putting those into each box from now on and there's one for each army on how to paint a standard model in a standard colour scheme within reasonable time and to a nice painting standard. In an amusing moment the redshirt assured me that we were still allowed to paint the models in any other colour scheme if we do want so. So GW are really putting an effort into making it as easy as possible on the customer.

So let's wrap this up with a few last opinionated points:

1.) There has been some critisim about how none of the new shades match the old range (probably because of a new manufacturer - maybe they're going back to HMG paints?) but this is somewhat damped by the fact that the range is much bigger than it was before so it's more likely that there will be very, very similar paints (plus, looking across the paints ranges of other suppliers, I'm sure people will find colours that fit their needs even if they started painting their whole army Tentactle Pink already).

2.) The price of the paints stays the same (for now) albeit they upped the price on their spray primers again.

3.) The names. Clearly, GW went for names that are even more specific to their IP than before. I'm not happy about that and it will take some time until people adapt to the new, partly unwieldy and undescriptive names. No big thing, just inconvenient.

4.) I saved the most glorious thing for last: Remember when we were all really angry and annoyed about the new paint pots and GW having removed the tiny little plastic bit that keeps the lid open? Well, they put them back on, and bigger and better and more glorious than ever before! This really came as a surprise for me and a pleasant one as you can imagine. The store manager let me know that the first batch of new paint pots probably won't have that thingy as GW have to clear their stock of current (crappy) paintpots but as soon as those are gone the new paint pots will be used. They're also said to close completely airtight but that's not a problem I had with the current ones (which are pretty crappy, just in case I haven't mentioned it before).

All in all, the quality of the upcoming GW paints seems to be top notch. Premium quality that kind of warrants the premium price. GW make a huge fuss that rivals the legendary fussing about the release of the plastic giant but that aside it's definately a good step for GW to add to their palette of paints which had gaping holes already.

I'm very much a friend of the do-it-yourself mentality in modelling and painting because this is one of the defining aspects of this whole thing and it's great to find something in life that lets you create something yourself (yeah, said the guy who paints army after army of battle-damaged Space Marines but I'm sure you get my point. :p ) and get creative about methods and work around restrictions or boundaries set by the material. In this regard it always goes with a bit of a bitter aftertaste when GW makes things as quick and simple as possible and give you an exact way for how to do it. Despite all this though, there's always this comforting feeling that not a single miniature in the world looks exactly like another. That's really cool if you think about it. Well, at least I do.

GW seem to go a very clever route with their painting and modelling supplies recently. I'm looking forward to getting a bunch of paints this Saturday and just try them out again. Maybe there will be some surprises but at least you got my views on the first try-out of the new products.

I hope that you found the read somewhat informative. Let me know about your first experiences with the new paints range in the comments section! Also stay tuned for our big review of the new paints on Saturday evening - we've prepared a lot of test models to check the quality of each new type of paint! Plus we'll compare the new paints to the old ones and also to similar products from other manufacturers and we'll also try how well the official paint compatibility chart from GW work.

Do you like our tutorials and reviews? Here is what you can do to support us: Disable your Ad Blocker or place your next Wayland Games order by clicking here or on the banner on the right. Thank you very much, we appreciate any help to keep us going!