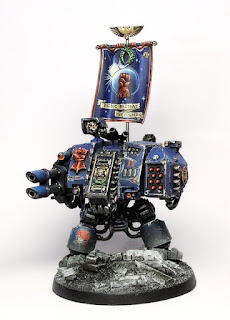 Greetings! As implied earlier, here we got the pictures of the finished Boxed-Up Battle Brother Jerian. 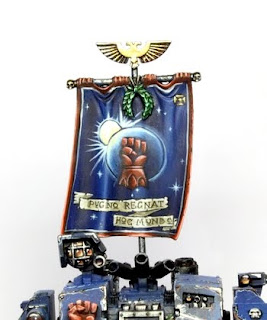 The main thing you'll notice I added of course is the banner. Due to the fact that regular Dreadnoughts - for what reason ever - don't come with banner poles any more I had to add this one. Simple, really: Thick gardener's wire, leftover banner from some Empire Greatswords (empire plastics are about my favorite source of banners altogether. They usually are big, plain and come in enough different variants) and some banner top. 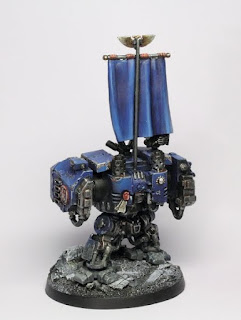 The letters read "Pugno Regnat Hoc Mundo" which, in the usual imperial pigeon Latin, is meant to say something like "(The) Fist reigns (on) this world" as a sort of motto of defiance towards the Orkish invaders.

The people amongst you who actually speak Latin are free to correct me on that phrase of course. Much to my repeated regrets, I never took the set of courses that included Latin in school because you know how kids are. "Latin's a dead language", "in a few years we'll all be talking Russian anyway" (due to perceived economic possibilities, not cold war panic. I'm not THAT old! :p ), "the Latin teacher is insane and smells funny", etc. 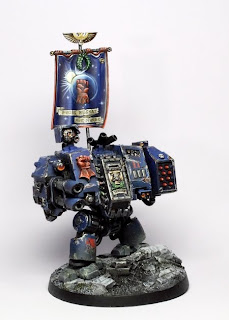 Apart from that I added a bit of smokemarks to the exhausts and a bit of rust here and there because the red rust looks so pretty on the blue armour. So that's that and the Crimson Fists army commission is rushing towards the finishing line with only a Thunderfire Cannon and a Drop Pod left to do. For the next blog update I'll go back to finishing these lovely Wood Elves though. See you soon!