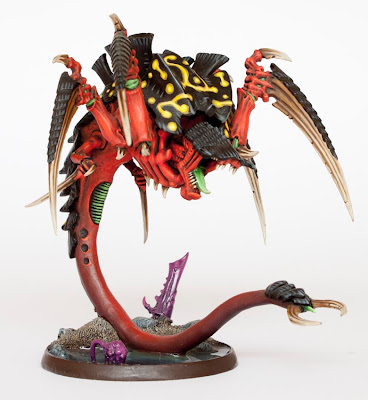 I always thought the Red Terror model from GW wasn't big enough to represent the creatures stats so I built my own out of a metal LOTR Fell Beast and Carnifex with a few Red Terror parts and green stuffing thrown in to tie it all together. This conversion conjures up strong imagery of the Alien 3 dvd cover. That must have been in the back of my head when I created it. More pics after the jump. 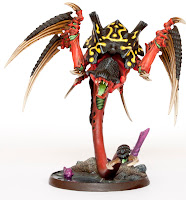 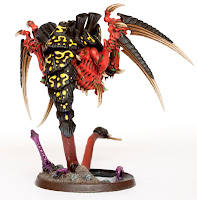 The only parts I used from the Red Terror was the tail tip and the top of the head which was added to the lower jaw/neck of a Carnifex head. The Fell Beast's tail was heavily green stuffed to add some girth to the tail and some recognisable Tyranid details. I also sculpted more carapace down the back of the tail to blend it into the Carnifexe's armour plating. I also added some greenstuff to the front of the carapace in front of the vents to create a smoother more streamlined look to aid borrowing. 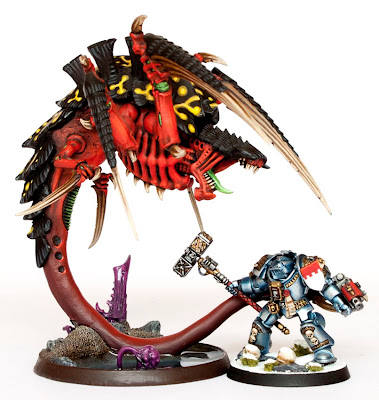 Painted a few years ago, this paint scheme is V1.5 for my Tyranids. I'm probably on V3.5 now with the progressions I've made with new Hierophant. Major differences with this piece are the lack of sharper highlights on the red, the claws and carapace are striped (instead of soft blends) and there is no purple/pink on the model (just the base) instead use of green can be seen on the Red Terror. The major change though is the carapace patterning. The recent Nids including the Hierophant have a small amount of yellow spotting. My early Tyranids were full on detailed random patterning based on poison rain forest frogs. Over time I just felt this strong patterning and the green was an overload on the senses, hence the progression of my scheme to it's current standard.
What do you think? Do you like the old or new scheme?