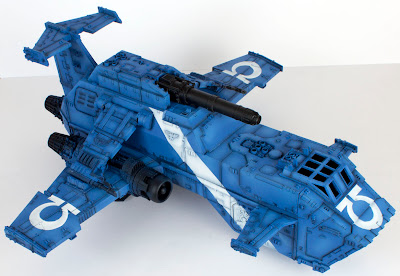 In this update you can see I've added a diagonal stripe to either side of the hull and three large Ultramarine symbols, two on the wings and one on the nose. All of these elements have been added to help break up the massive amount of blue and I think it really works. More pics after the jump.

I masked off the stripe and U symbols. I actually only made one U stencil mask and just reused it for all three icons. I sprayed the areas with VGC Wolf Grey and then shaded this using VGC sombre grey through the airbrush. Finally I mist the areas with VGC Dead White to brighten it up. Once the tape was removed I had a really convincing result because of how the blue and white are both highlighted and shaded. If it was a bold white stripe or icon with no shading it wouldn't have worked and I think it would have shattered the illusion. 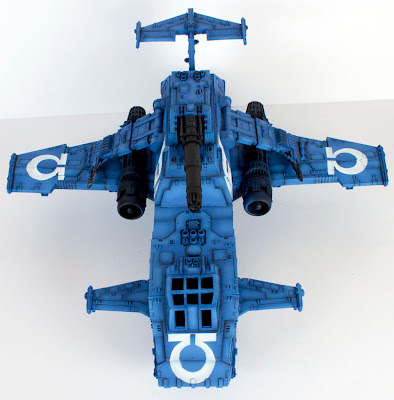 Next update I'll show the Thunderhawk with the wing and nose mounted heavy bolters glued on and hopefully, the jet engines, turbo laser and landing gear will all be painted in metals and bronze.