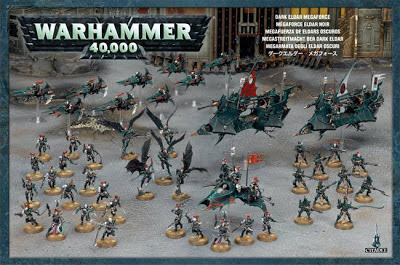 Just as Garfy did yesterday, I want to take a look at my hobby resolutions from last year and see what I managed to fulfill. Click "More after the jump" to find out what the Dark Eldar megaforce has to do with it. I also present a showcase of all the models I painted last year and share my resolutions and plans for 2013, so click...

Let's begin with all the models I painted in 2012. 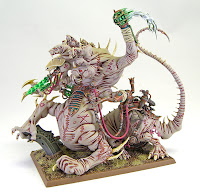 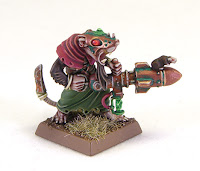 Most of last year's hobby time was spent on working on my Skaven army. Early 2012 saw me completing a Hellpit Abomination, as well as painting a 25 rats strong Skavenslave unit and a scratch-built Warlock Engineer. 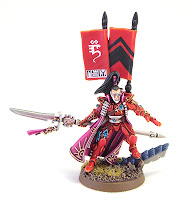 In March I took a break from painting furry tails to add a couple of models to my warhost of Saim-Hann. I completed a small squad of Fire Dragons and Prince Yriel, which is probably my favourite model of 2012. I think I've never seen this model in such an unusual paint scheme before. 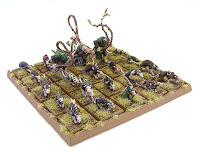 Then I needed to paint two more Skaven units to finish my 2500 pts Skaven army. There were 25 Giant Rats (including Packmasters) and 30 more Clanrats. Thanks to my move to a new flat (including setting up a small but proper man cave) and a new job, these units kept me busy until August.

In between and after the last two Skaven regiments I painted these two Eldar models. There is a Warlock, an unofficial resin sculpt made by an ex-GW sculptor, as well as a slightly converted Farseer.

Starting at the end of September, my Necromunda gang was the second big project of 2012. A couple of years ago I picked up a collection of all 20 different Escher sculpts. It felt so good to do these beautiful models justice, after they have been hidden away for so long. I managed to paint up 14 models so far, the first five can be seen above.

Ok, time to compare my hobby output to my resolutions from last year. Skaven army complete - check (even though it took me longer than I thought). Fire Dragons painted - check, plus a couple of single Eldar models. Escher gang - about 3/4 painted. Almost. Starting Dark Eldar - failed. All in all, I can't compete with the jaw-dropping amount of beautiful models Garfy painted in 2012, but 115 painted models are not too bad actually, aren't they?

And this brings me to my hobby resolutions for 2013. After completing the remaining six Escher models, Dark Eldar will be my big project for 2013. Garfy and I agreed to tackle our Dark Eldar and Necron battle forces in a kind of monthly competition here on Tale of Painters, and one of my resolutions will be to not fail too miserably ;) Those who follow this blog for a longer time know that I also own a Ultramarines army. As I didn't manage to add something for them in 2012, I want to make this up in 2013. I'll try to squeeze in a bike squad, and probably one or two characters, like Tigurius or Sicarius. I also got a boxed up Land Raider Redeemer, maybe I'll get to it at the end of the year. Speaking about the end of the year, rumours are we might see a new Eldar codex around this time. I hope we'll finally see the new plastic jetbikes, of whom prototypes have been on display on various Games Days. I wouldn't say no to plastic Wraithguard or a fancy new flyer either. The only thing I fear after The Hobbit and the new Dark Angels releases are the corresponding price tags...

But this is future talk. Something more imminent is me dabbling in airbrushing. In the next couple of weeks, I'm finally going to shell out the money for a proper airbrush setup. So one resolution for 2013 is definately learning and mastering the airbrush.

What is your résumé of 2012? Are you happy with your hobby output? What are your planned projects for the year? Tell us in the comments and share your resolutions!