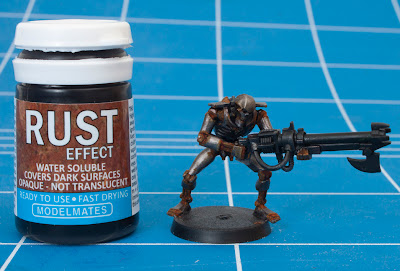 I love learning new things, so when Ghoulio suggested a liquid rust paint in the comments of my Necron Paint Scheme blog entry, I was quite excited to give it a try. One virtual trip to eBay and a few days later I have the pot.  Read on to discover what's so great about this paint. 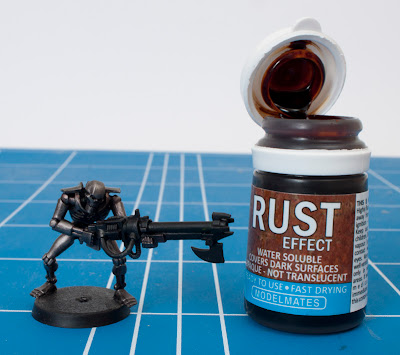 Rust Effect is an alcohol based liquid. It has a ball bearing to aid mixing which is necessary before use because this can separate. It's also highly flammable. It's an 18ml pot which features a flip top lid.

I've started with a Necron which has been drybrushed with Warplock Bronze and then Leadbelcher. As mentioned above, give the pot a good shake before you use it. Then apply the solution using a brush, just dab it on where you want rust, try to think where rust would form in natural places like creases and crevices etc. I would be interested to test this stuff on larger flatter areas using a tooth brush to flick it on. 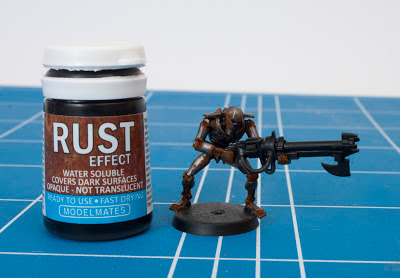 The shades of rust get darker the thicker or more coats you paint on. I've gone quite heavy, but there are some nice orange tones on some of the lighter areas. It dries very fast.

This product is water soluble, so you can push the rust effect around with a wet brush or completely remove the rust from certain areas. A nice effect is painting the entire model silver and then covering it in Rust Effect and then using a damp cotton bud to rub off the raised areas showing the silver underneath. I think Ork Vehicles would look great using this technique. 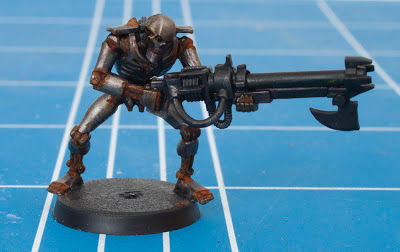 Here you can see i've used water and a brush to remove rust from the side of the head, the hand and the thigh. 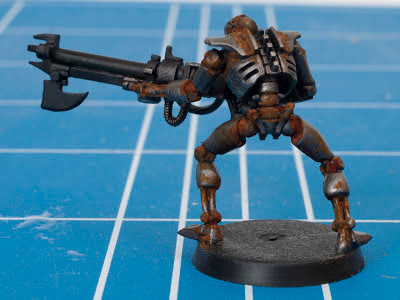 The photo above really does show some lovely different rust tones. I like the randomness of how it dries. It's so realistic. It's hard to replicate that randomness using powders or brown and orange paints. This stuff is quick to apply and dries quick. I would recommend sealing it with a varnish.

I've checked out our sponsor's websites and at the time of writing this they don't stock Modelmates Rust Effect. Wayland does stock products from ModelMates, so contact them using the link below and email them this review and ask them to stock it!


Do you like our tutorials and reviews? Here is what you can do to support us: Check out the websites of our sponsors, place your next orders at Wayland Games by clicking here or on the banner on the right. Thank you very much, we appreciate any help to keep us going!