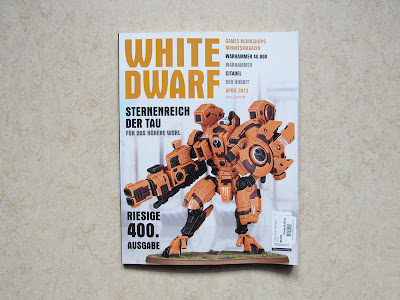 April's edition of White Dwarf marks the 400th (British) issue of Games Workshop's monthly hobby magazine. Former anniversary issues had posters, free miniatures and other goodies, let's see what the WD staff has to offer this time - apart from lots of pictures of Tau battle suits. 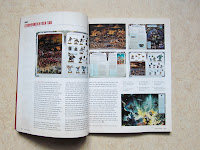 New Releases
46 pages of the latest products from Games Workshop, Forgeworld, Black Libary and licensed games. Of course, most of this section is taken up by this month's Tau release. The centrefold pages are dedicated to the Sunshark and Razorshark flyers. There are also a couple of Hobbit Finecast clampacks, there is Necron stuff from Forgeworld and a depressing price list at the end. 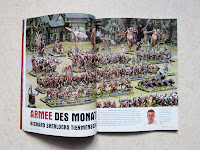 Army of the Month
This time with Beastmen by Richard Sherlock, nice to see an army that usually doesn't get much spotlight. A nice sight if you like Beastment. 6 pages.

Jervis Johnson
Some advice on playing with a game master. Usual size of 2 pages. 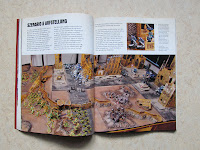 Battle Report
18 pages, Dan Harden's Tau against Jes Bickham's green Tyranid army that has been featured a couple of times in WD now. The game is played on the table that is featured in Battlegrounds later. Apparently it was a narrative game, but no background or story is presented apart from three sentences in the introduction. Business as usual - no point values, lots of small pictures, no maps.

Blanchitsu
John Blanche presents his latest creation on 4 pages, a couple of hive workers and pit slaves, made from a plethora of bitz and painted in his usual sketchy style. 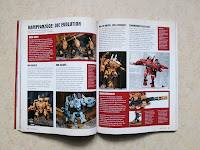 Tau Battlesuits
This is an 8 page feature about designing the various Tau battlesuits. There is an interview with Jes Goodwin, who designed the Crisis suits back in 2001 when the first Tau codex was released, an overview about the various suit types commented by the designers (sadly the XV9 Hazard is the only Forgeworld suit featured) , and an interview with Matt Holland about the new Riptide model. Most of the article is made up of pictures, and only a single concept drawing is shown. 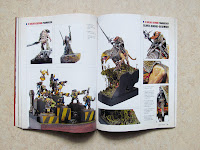 Parade Ground (1)
16 pages of Golden Demon 2012 winners from France, Italy and the United Kingdom. There are some nice models and conversions, but after three issues with long picture spreads of competition level painted models I'm fed up with it. It's just too much in a row. I'd like to have some other articles for a change. But they won't stop, next month there will be models from Japan...

Kit Bash
6 pages with an Ork Deff Dread with an integrated Shokk Attack Gun, a custom Ogre hunter with a splendid paint job, a Dark Angels Libarian on bike, a Ghoul King/Garden of Morr diorama and a Chaos Lord of Khorne. Some nice little models in there, but nothing too spectacular. 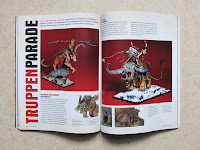 Parade Ground (2)
Another 6 pages of Parade Ground, this time with Fantasy monsters. There is an Exalted Vermin Lord, a Stonehorn, an Arachnarok spider, a blue Imperial Griffon, a Ghorgor and a reader submitted Hellpit Abomination and a Arachnarok spider. The paint job of the Vermin Lord is the same as on the Forgeworld website, and the Arachnarok has been featured in an army workshop article back then when the latest Orcs & Goblins army book was released, but otherwise an ok article. 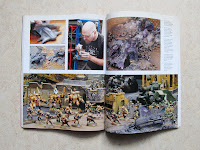 Battleground
To celebrate the 400th issue, the WD team and some of the studio's terrain guys and Mark Bedford from FW build a huge 40k table, which is documented on 8 pages. They openly admit that they only may  use stuff that can be bought from GW or Forgeworld. So the table looks like all the other ones you've seen recently in White Dwarf - a Realm of Battle board with obscene amounts of Cityfight buildings and other random 40k terrain kits like the Wall of Martyrs. Yet I liked the sight, as they decided to paint the buildings in a muddy yellow, something you don't see too often. 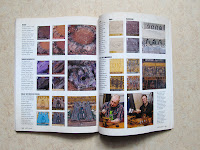 Paint Splatter
Spanning 8 pages, starting with three pages of 'Eavy Metal painted Tau models and a random list of basic paints that might have been used for painting the presented models (or not). About as useful as the painting guides you find on the back of a model kit. One more page of Dan telling you how he painted his Tau army that is featured in the battle report, then four pages of painting the board that is featured in Battleground. There were some interesting washing and stippling techniques in there, probably one of this issue's highlights.

Jeremy Vetock
... talking about hobby myths in his usual witty tone. I found it quite entertaining to see some humour in White Dwarf, a nice change I think. 2 pages. 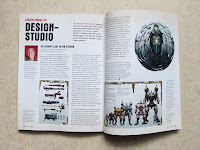 This month in...
15 pages, starting with pictures of models painted by the WD staff, then there are two pages of short interviews with former WD editors (of course, fan favourite Paul Sawyer isn't featured as he works for Warlord Games now). Jeremy has two pages to talk about how he wrote the new Tau codex (no rules talk), followed by a single page about designing the Tau flyer kit (no concept art). One more page of painted models from around the design studio, two pages of WIP models from Forgeworld (I was pleased to learn that Trish Carden went to FW, no more of her abominations to be cast in plastic for eternity thankfully). A short single page interview with Chris Wraight, who wrote Blood of Asaheim for Black Library, along with a single page of models painted by the Black Library team with a beautiful Dark Angels Contemptor Dreadnought.

Parting Shot
No, this isn't a plastic Thunderhawk. Enough said.

Something special in this issue?
Nothing, except it's the biggest WD so far with 172 pages - last month had 152 pages.

Verdict
Nothing that really stands out, of course no free goodies like with former anniversary issues apart from a couple of extra pages. Blanchitsu and the Golden Demon showcase is something I don't need to see every issue, it's so much of the same that it became boring by now. Especially the Golden Demon showcase screams filler to me. WD is becoming more and more a picture book of painted models. I like showcasing nicely painted models, thats what we do on Tale of Painters after all, but in a magazine I'd like to read articles that go a bit deeper. For example, why is there no article that expands the background of the Tau? There were so many codices and army books released recently, why is there no tactics article? So all in all, slightly above average.