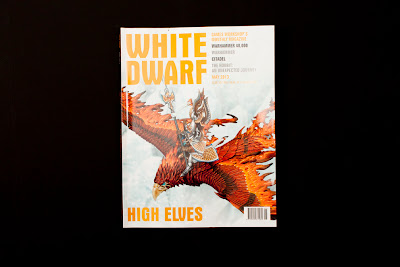 This month's White Dwarf magazine is a 152 pages and features the High Elves. Read on for the Tale of Painter's in depth review of the publication.

Let's break the magazine down into sections. I'll write a brief paragraph about the section and then give it two scores out of 10. One score will be for usefulness, the second will be for rereadability (I think I just invented a word). 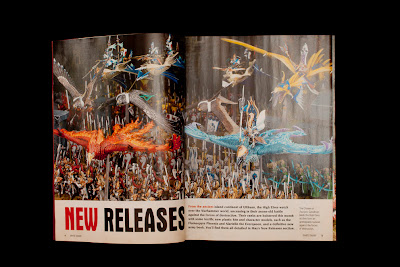 44 pages of all the latest High Elf releases, a single model for the Hobbit Strategy Battle Game, another t-shirt this month and new books from Black Library. This section has really come on in leaps and bounds since it's reinvention. I like the prices at the end of the section. It's convenient. Taking the prices away from the products and descriptions gives it less of a catalogue feel. The photos have improved significantly. The imagery is clear with no obscuring dark shadows or coloured light.
Usefulness - 8/10 (need to know about box options and prices).
Rereadability - 2/10 (no need to return). 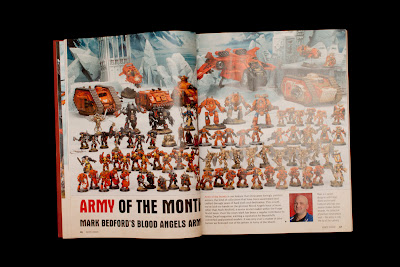 Army of the Month:

Mark Bedford's Blood Angels army is one of those rare beautiful sights that has a lot of gorgeous Forge World models in it. It's enough to make you get your credit card out. My only concern is his inability to paint the same shade of red more then once (ultra-precise Stahly must be foaming at the mouth and twitching at this).
Usefulness - 5/10 (hardly any conversions and varying paint schemes are of no use to me)
Rereadability - 7/10 (pretty pictures will make me return). 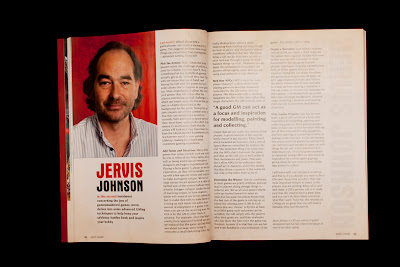 Jervais' article is one of those soapbox sections where a senior individual at Games Workshop gets to tell us his thoughts and feelings. This month is the concluding part Games Masters. Quite inspirational, he talks a lot of sense, although sometimes he's just stating the obvious. One of his word's of wisdom for being a Games Master is Create a Narrative... well duh!

Usefulness - 7/10 (useful if you want to be a games master)
Rereadability - 5/10 (average score, you might return. 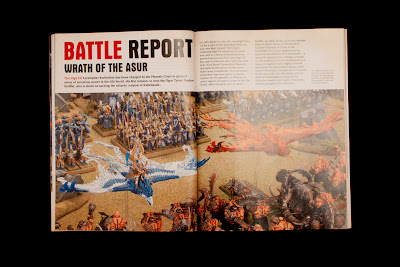 The High Elves march to war against Jes' Ogre Kingdoms army. We last saw Jes' Ogres back in November when they took on Adam Troke's Chaos. I think it's too soon to be seeing them again. I would have liked to see the High Elves take on Goblins personally. I think White Dwarf must read the Tale of Painter's reviews because this month the images in the battle report are much bigger. The photography isn't as good as some of the other areas, I've sen better pictures taken on an iPhone. 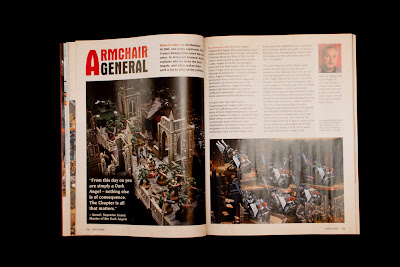 OK, White Dwarf has definitely been reading Stahly's magazine reviews... he's been saying they need new articles and we have one! If you've ever wondered why Adam Troke likes Dark Angels then this article is for you. Inspired by this article, I will be posting an article on Tale of Painters telling you why I like dust. Seriously, this is a poor idea for an article. It's too close to Army of the Month because  it show's models from Adam's army.
Usefulness 1/10 (so poor I'm considering tearing the pages out to make paper rhino models so they have some use)
Rereadability 1/10 (nice pictures, but we've seen Adam's models before) 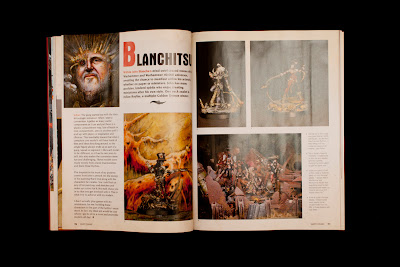 We're given a break this month from massaging John Blanche's ego as he features some models from Julian Bayliss who is a multiple Golden Demon winner. Julian, it would seem, appears to like nipples on his models. In all fairness, they're really nice conversions with a dark gritty feel to them.
Usefulness 7/10 (inspiring conversions)
Rereadability 5/10 (could do with more insight to make it even more interesting) 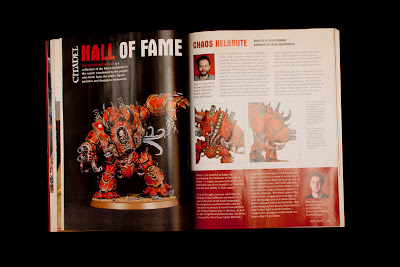 Helbrute makes it into the Hall of Fame this month. Interesting to read the thoughts of sculptor Oliver Norman.
Usefulness 2/10 (serves no purpose other then to award good work)
Rereadability 2/10 (no need to return to read this again) 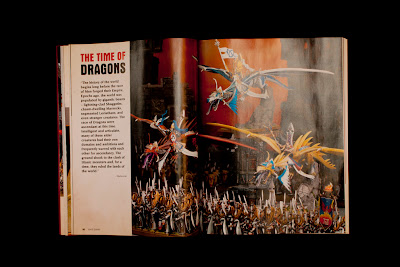 The Time of Dragons

An interview with Mat Ward and Trish Carden about Dragons. Really interesting to read some background of Dragons in Warhammer Fantasy. Trish goes on to explain the ideas and processes to designing and creating dragons.
Usefulness 7/10 (always good to brush up on your fluff)
Rereadability 7/10 (I find it interesting to learn how the designers work) 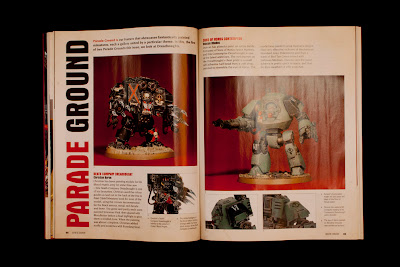 I love these sections. We stray away from the gleaming paint jobs of the eavy metal team and get to be inspired but hobbyists of a similar level to ourselves. The first parade ground is all about Dreadnoughts. It's mainly Imperial Dreads, with a single Helbrute from a reader at the end. They should have included Ork Dreadnoughts for variety. Kitbash has an impressive altar of Chaos conversion, some lovely converted cultists and a regiment of High Elves that don't look converted in the slightest. I've never really considered weapon and head swaps to be true conversions.  Parade Ground has a second article this month which features titans. They're all Imperial Titans, whilst impressive what a let down! No Tyranid or Eldar titans. Golden Demon this month is just two pages featuring four Gold winners and a Silver. I'm not a golden demon winner (I have two UK finalist pins though) but I can't help but feel the level in Japan isn't as high as it is in Europe... anyone want to fly out to Japan next year and pick up a couple of Golden Demons (completely joking, before I start getting Japanese hate mail).
Usefulness 7/10 (inspiring stuff)
Rereadability 8/10 (I love looking at other people's models) 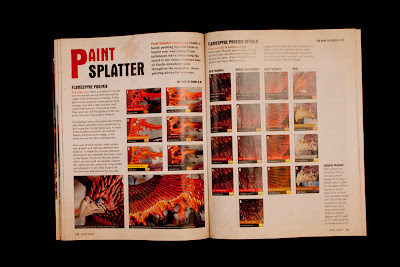 Previous Paint Splatters have been a major disappointment which have just included lists of paints or basic three step guides. Is this month's section any better? Well, actually it is. The guide on the Flamespyre Phoenix is actually quite comprehensive with a total of 23 steps. The sisters of Avelorn has a 21 step guide as well. The models are nice as well, they look good. There are some lists of paints for a few of the High Elf models. Matt Hutson's guide to painting green icicles baffles me though... why green, is he colour blind? Dan Harden's guide to painting horses is incredible though, 5 step guides to painting 8 different kinds of horses.
Usefulness 9/10 (completely turned it around this month, very good)
Rereadability 9/10 (it's worth saving this section) 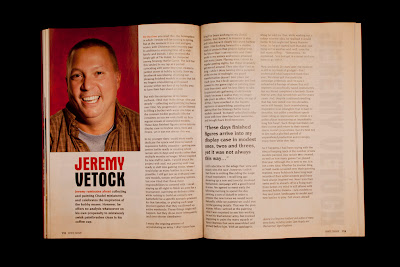 Unlike Jervis' patronising articles where he spells out the obvious, Jeremy has a really friendly, humorous style and it's genuinely interesting to read about his hobby adventures.
Usefulness 5/10 (more interesting then useful)
Rereadability 6/10 (yeah it's nice, read it again) 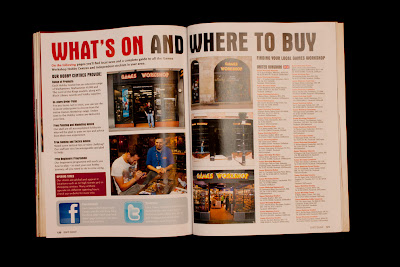 What's on and Where to Buy

Long section of information you'd use your iPhone to find out. In today's day and age this section is redundant. I did a double take on page 126 when I thought I saw a sculpt of a new Tyranid Bio-Titan, but alas it's the 3-up model of the Tyrannofex.
Usefulness 8/10 (really useful if you want to know what's on and where)
Rereadability 1/10 (no need to ever return to this because they will put it in next months issue) 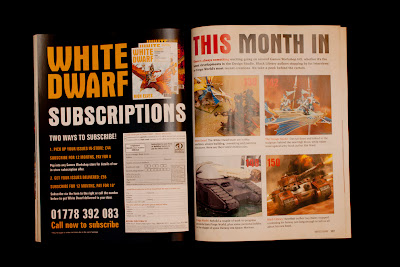 This is our doorway into the behind the scenes at Games Workshop Headquarters. I always find it interesting to read about what the White Dwarf team have been working on. We also get to hear from the design studio on the latest model and rules releases. They've also crow-barred in some Lord of the Rings models which are sorely missing in this issue. It's like they put the magazine together and at the end said "oh crap, we've forgotten that other game we make!" The Forgeworld section is always good to see something new and exciting and this month doesn't disappoint with a cool image of the Fellglaive super heavy tank which must be an early prototype because it different to the one I saw at the Forge World openday. Jes also interviews Guy Healy who now writes for Black Library.
Usefulness 6/10 (nice to see what the team has been up to)
Rereadability 7/10 (insightful)

This issue lacks variety. It's two sided. It's all High Elves (obviously) and Space Marine (including chaos) orientated. Article about Dark Angels, Dreadnoughts, Blood Angel Army of the Month, Helbrute Hall of Fame. Whilst I enjoyed all the articles and feel inspired to pick up my hobby tools and spend today working on my own models I just feel they could have done more for other areas of the hobby like some of the xenos races in 40k, or at least include some articles on the Hobbit.
This issue also lacks anything in the way of scenarios, special rules, data sheets etc.

I'm going to give this issue two scores. One from a painter's point of view and one from a wargamer's perspective.

Do you agree or have I got it drastically wrong? Tell me in the comments.