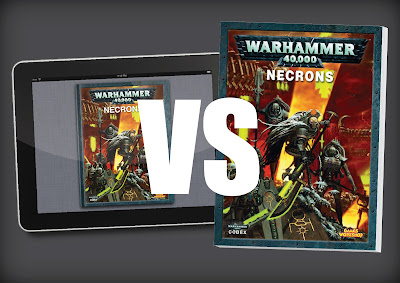 I collect all the Warhammer 40,000 Codices. I buy them as soon as they are released. I've been really really impressed by the sixth edition hardback books. The productions values are really high with embossing and spot uv (glossy areas). It just feels nice and it helps justify the £30 price tag a little more. Read on to find out if my first iBook codex can win me over. 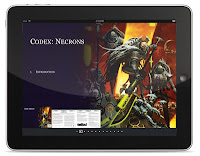 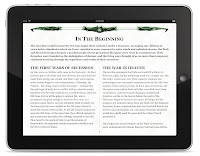 Navigation is easy with each section showing the pages within that section at the bottom of the navigation screen.

I keep all my codex books and still have copies dating back to second edition on the same shelf as the current incarnations. Having bought Games Workshop publications since 1994 I was extremely skeptical about the iBook codices available on the iPad. I'm not someone who is is set in their ways and I'm always up for experiencing new things so I thought I'd give the iBook version a try.

I've been reading books on iDevices for a few years now, I love the convenience of having a book on my phone to read whenever I want. I was disappointed to discover that the Games Workshop Codices are not available on iPod or iPhone, only iPad. Don't even think about trying to buy a copy for Android devices as that platform isn't supported.

As I mentioned I already own all the hard copy codices so I didn't know which one I should choose to be my first iBook. I downloaded samples of the Tau and Necron book and literally had a flick through both. I quickly came to the decision to buy the Necron Codex for the sole reason it's been optimised for sixth edition and includes pictures of the entire the range of models.

The Necron iBook is £20 and the Tau iBook is £30 which is the same as their printed equivalents.

Instantly I'm impressed and depressed about my first iBook purchase. I'm really pleased to own a document with all the correct spellings, corrected rulings and latest pictures but I'm unhappy that my hard copy Codex is riddled with errors and missing pictures. To make my hard copy version be the same as the iPad version I would have to print out the FAQ and tear out pictures of the missing model range from White Dwarf. OK, this isn't as drastic if you bought a hardback sixth edition codex because the whole model range is complete and the rules are current but it could still happen. Let's say for arguments sake that GW release a wave of new tanks for several armies in a month. They would be releasing the rules for these tanks in White Dwarf meaning you have to tear the pages out or carry a White Dwarf around with your Codex. The iBook would just receive an update and be current again. Sometimes errors slip through, for instance the sixth edition printed Dark Angel Codex had incorrect wargear lists in some of the entries. That's extremely frustrating if you've spent £30 on a book. The iPad version was corrected and is perfect. 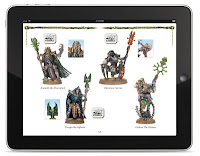 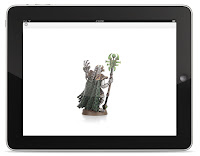 The iPad codex features all the models released after the printed codex so nothing is missing. 360º views are a nice bonus. 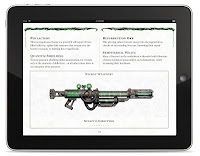 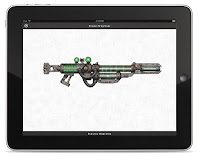 Most of the imagery is clickable giving you a zoomed in version This box showing a synaptic disintegrator can actually be swiped left and right to show more weapons..

The picture quality of the retina display iPad is incredible. The images are so sharp and bright. You can pinch and zoom and many pictures have 360º views which is a really nice touch. These 360º turns aren't really a bonus though because they use the views on the GW website which (obviously) are free to view. The pictures win outright on the iPad versus the printed version. 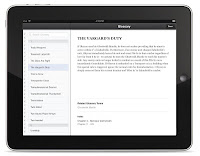 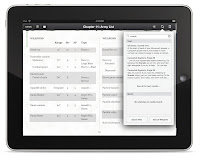 A very useful glossary and search engine certainly speeds up finding those rules.

Navigating a printed book is easy, we've been doing it since we were children. The iBook needs to be navigated differently. Yes you can sit there and flick through the pages one at a time but you also get a search feature which is very accurate, a glossary and a contents page. 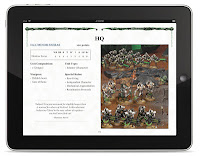 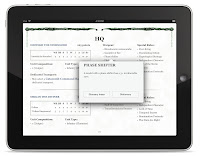 Clickable rules saves flicking backwards and forwards through the book.

On top of this all the unit entires have quick links to the army list entry and vice versa. I also like the fact the special rules in the list entries are clickable and opens a pop up with the full rule. This approach completely eradicates the need to flick backwards and forwards through the book trying to find rules. It's going to make wargaming much easier and faster. The new sixth edition Codex books do have a six page fold out section at the back with all the rules you need though, so that's quite accessible but not nearly as convenient as the pop up on the iBook. 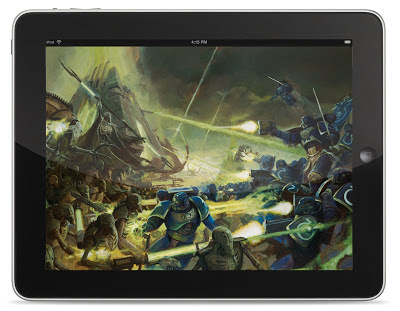 Imagine having all the iBook codices at your disposal at a tournament. Within seconds you can pin point rules that you think your opponent might be bending and because the iPad is backlit you can play true night fighting games and turn the lights off while your opponent fumbles in the dark trying to read his printed version. OK so that last point is ridiculous but it's nice to read at night with the lights off. You can add notes, highlight and underline text and all the words can be defined using the iPads built in dictionary, so if you've ever wondered what an oubliette is you can now find out without leaving the page.

So far, the iBook is coming across very well but it must have some downsides... well it does, battery life of the iPad is 10 hours and if you're not regular with your charging the battery might go flat mid game. Not a problem if you game at home but a bit trickier if you're at a club/tournament. We've already mentioned about the availability of the iBook to just iPads and the iPad is the most expensive option on the market (you get what you pay for though). iPads are also more susceptible to theft as well. Some more unsavioury characters hanging around a club or store might see an opportunistic snatch and grab, where as you won't suffer this outcome with a hard copy Codex. However, the biggest problem I have with the iBook codex is the inability to sell it on. If I quit the hobby tomorrow and sell all my models and books, I can expect to get some money back on my printed Codex publications. A £30 iBook is worthless. I can only pass it to other devices if those devices are registered to my iTunes account (which is fine because I'm against piracy) but if I bought an electronic version I should be able to sell that electronic version on if I wanted to. This isn't a deal breaker really, because as I mentioned earlier I've kept all my hard copy Codices since 2nd edition. 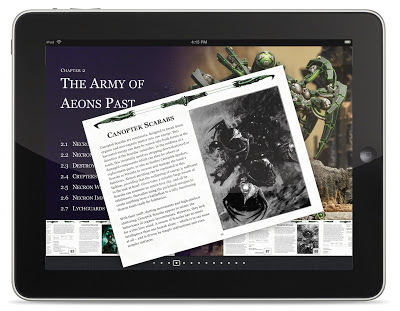 
So with Codex Eldar on the horizon I need to decide, do I buy the iBook, or the printed Codex or both?   I might buy the hard copy book only if the FAQ is tiny and not correcting big stupid mistakes like the Dark Angel one.

The conclusion I come to is I love the fact my iPad Codex Necrons is all up to date and correct, I'm not sentimental enough to stick with hard copy books and the benefits of the iBook over the printed book are fantastic and well worth it. But the issue I have is the cost. GW aren't having to pay out for print or distribution or wages of staff having to sell the iBooks in a store which also has overheads. The price of these iBooks should be a lot lower. If they were lower I'd be inclined to buy the hard copy and the electronic copy. If GW make the iBook price lower then sales of the hard book would dry up. I don't think they'd be any worse off though.

I wish GW would do a free download of the iPad version with every printed version you buy. Even if it was a code you had to apply for with proof of receipt, or a code GW staff issued. I know why they don't do do free downloads with printed purchases because not everyone has iPads, so the people with the free download code but no iPad will be selling the code for a crazy low price like £10 to eager iPad owners looking for a bargain.

What do you think? Do you have a preference?