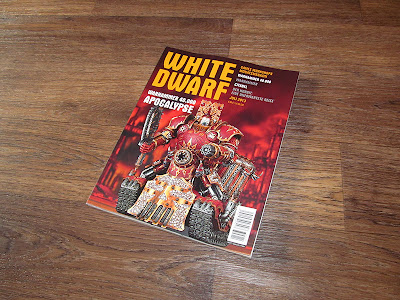 This month marks the release of the new edition of the Apocalypse expansion for Warhammer 40k. Prepare to read the words "apocalyptic", "cataclysmic" and "titanic" more than once in this month's issue of White Dwarf. Hit "More after the jump" to find the monthly Tale of Painters WD review with a look at every article. 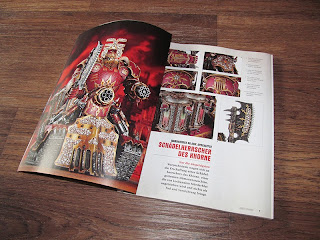 New Releases
52 pages of the latest products from Games Workshop, Forgeworld, Black Libary and licensed games. This month is dedicated to Apocalypse, the two new Necron and Khorn super heavies, the new collection of Space Marine captains and last but not least the apocalyptic terrain kits. With this month's releases, the spark didn't really jump over me, I mean the Lord of Skulls is quite nice, but I don't get why the Tesseract Vault gets so much praise, it's just looks like a quartered, hollow Monolith spread out with some stuff inside. And why do you need to buy four Captains for 21 Euro each, when the old Apocalypse council of Space Marine captains was 26 Euro for four models? 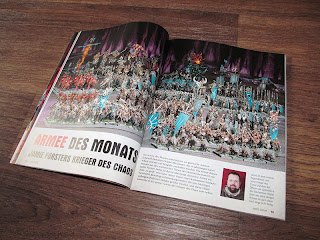 Army of the Month
Jamie Forster's Warrior of Chaos. This is probably one of my favourite army showcases so far, I really like Jamie's strong and cohesive paint scheme. Basically it's a sea of silver, flesh and other dark and muted colours with a generous use of turquoise as a spot colour. Very well pulled off, with a couple of conversions here and there, even though I still think the Forsaken models are terrible. Only six pages, would have enjoyed two or four more.

War Diary - Armies on Parade 2013
This is part two of this kind of Four Generals article, but GW is all about collecting now so this time we'll follow several people from the studio who don't paint gaming armies but Armies on Parade entries. There is a stunning Harlequin Wraithlord and some impressive pink Plaguebearers, amongst other nicely painted models. Four pages.

Jervis Johnson
Talks about how Phil Kelly and himself wrote the new Apocalypse book. Rather interesting how he describes the different approaches of him and Phil concerning the writing of rules. Usual size of 2 pages. 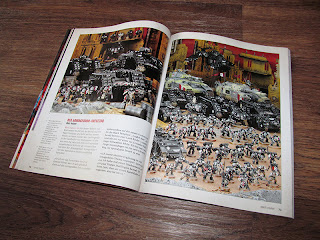 Apocalypse
In this 14 pages, most of the guys from the WD staff talk about Apocalypse and show off their latest apocalyptic additions to their armies. Andrew painted a Lord of Skulls and some Khorne models for his Death Guard, Adam a formation of three Predators and six Librarians for his Dark Angels, Matt added a third Land Raider to his already impressive collection of Black Templars, Eric painted a Stompa, Jes a Tesseract Vault, Glenn started a tank company of the Imperial Guard, Dan added two more Riptides to his Tau and finally there is some advertising for Forge World as well. An okayish article, as even though most of the models are new, the armies they belong to have been shown numerous times before. I would have liked to see some Apocalypse armies from the other people at the studio for a change. 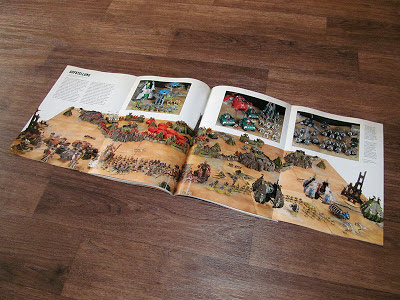 Battle Report
Probably the main feature of the issue as the report spans 30 pages. There is even a second centrefold showing the whole table with the set-up armies. Jes' Necrons and Andrew's Death Guard, reinforced by Chaos and Necron super heavies from the studio and Forgeworld, form an unholy alliance to fight against the Angels of Death: Matt's Blood Angel battle company he painted for the first Apocalypse book, and Adam's Dark Angels. By the way, Matt mentioned he needed to paint three more dreadnoughts because the battle company formation changed, let's hope this isn't a trend in the new Apocalypse book to force you buying new models. Of course, the table is full of the new terrain kits. If you got the tiny amount of 1269 Euro spare, you can buy the table with all terrain pieces in a handy 1-click-bundle over on GW.com, even though after a first glance the bundle is short of 6 Realm of Battle tiles in comparison to the setup in the battle report. 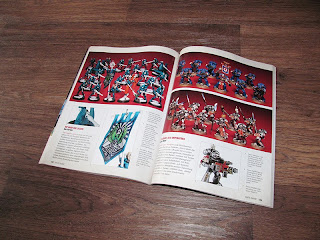 Parade Ground
As if there wouldn't have been enough 40k in this issue, this month's theme of Parade Ground are Warhammer 40.000 squads. There are Blood Angels, Eldar Rangers and Guardians, Ultramarines, Grey Knights, and more Marines and a squad of Death Korps riders in the readers' submissions. Most of all I enjoyed the turquoise Guardians because I think of painting up some Eldar in turquoise sometimes, too. Six pages. 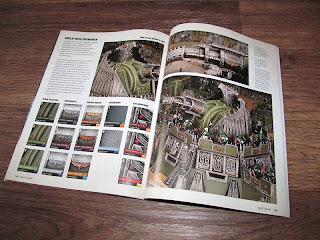 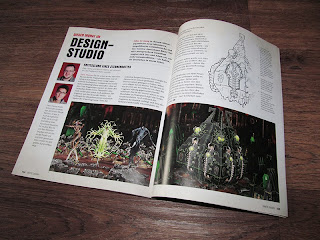 Something special in this issue?
The second centrefold in the battle report.

Verdict
This month I'm kind of torn apart. This month's issue isn't really worse than the last couple issues, but I just don't feel Apocalypse. I just don't feel the need to buy oversized (and in case of the new releases overcosted) models just to put huge templates on the battlefield (by the way the new edition of Apocalypse uses new templates which you need to buy for 20 Euro extra, you can't use your old Apocalypse templates anymore). I also felt that the Apocalypse article, where the WD guys present their Apocalypse additions, wasn't that inspiring because you have seen those armies so many times before. The biggest problem of White Dwarf's new direction remains variety.