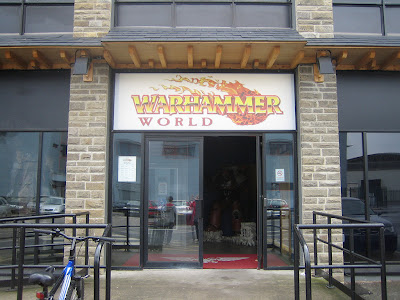 Hi, it's Marked_by_Chaos (aka James) back again with a report of the recent Design Studio open day on July 12 2013 at Warhammer World (dubbed “Enter the Citadel”). It was great to attend various seminars and tutorials and to talk at length with the guys who design the art, miniatures and games behind the largest fantasy and sci-fi miniatures company in the world. Even better my friend was driving so I could enjoy a few pints of Bugmans beer in situ.

I took notes throughout the day and to stop me waffling on for too long I have divided this review into 4 parts. Today it's Sons of Khaine - Developing the Eldar; next up are Developing big kits; ‘Eavy Metal Masterclass (Part 3 – following on from my previous reviews) and Visions of War – The Studio Art Team and John Blanche.

Sons of Khaine - Developing the Eldar

Eldar of Saim-Hann (painted by Stahly)

One of the highlights of the day was a Q&A was hosted by Jes Goodwin and Phil Kelly, the creative minds behind the Eldar and Dark Eldar releases. They started with a number of pre-planned questions to get things going and then opened the floor to attendees.

The Eldar and their Dark Brethren

Jes and Phil were at pains to stress that the development of an army is an ongoing process. As with all releases there are many great ideas that they have had to leave on the design room floor which they would love to revisit in future.

Both Phil and Jes are clearly excited about the symbiosis between the Eldar and Dark Eldar ranges. Phil was keen to play off the background developments for the Dark Eldar codex and to emphasise that the Craftworld Eldar are more nuanced than simply being the “good Eldar”.

Phil wanted to explore and reaffirm the tendency of the Craftworld Eldar to be every bit as capricious and contemptuous of the “lesser races” as the Dark Eldar. Phil discussed at length the relationship between the Eldar and Dark Eldar. While the decadent Dark Eldar shamelessly adhere to the older ways that led to the fall, the Craftworld Eldar are akin to a puritanical faction or cult that emerged in response to the historical excesses that led to the Fall (jokingly compared to the vegetarians of the Eldar species). However, they are both part of the broader Eldar race and can be viewed as estranged brothers who might come together against existential threats or even perceived slights to their race.

Talking about the design aesthetic of Dark Eldar, Jes referred to the irony that despite trying to hide from the influence of chaos in the Webway, by indulging in their body modification fetishes the Dark Eldar have never-the-less become a parody of the warping and mutating influence of chaos. Jes indicated that this is something that they might look at in more detail in future.

The Eldar are an ongoing pet project for Jes. Even when not actively “on project” Jes continues with his fantastic sketches, continuously imagining new elements and designs for the Eldar. This has historically also resulted in his sketches being passed to Forge World for use in developing their Eldar range. Jes was keen to showcase the common design elements across the Eldar range. In particular they are all about smooth lines and elegance. Jes also discussed the concept of the “pace” of a model. He surmised this as being the relationship between the proportions, detail and free space on a model, i.e. the clean curves and robes as against the intricate detail of trims and emblems.

Jes is protective against moves to alter this “pace” and clutter the aesthetic of the Eldar. An example cited was the new Farseer. It is quite a simple sculpt in some ways and Jes was determined to keep the smooth flowing robes as a key feature of the model. This would have been ruined had the robes been embellished with extraneous detail. 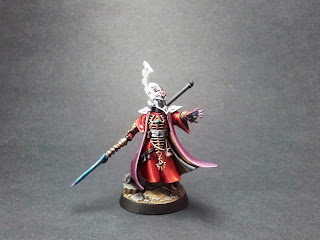 A lesser known design cue is apparently the shape of the Eldar body and its replication throughout the Eldar range. Aside from long and elegant limbs the Eldar have a very pronounced Mesomorph torso (v-shaped), with an inhumanly narrow waist compared to their relatively broad shoulders. This is often extenuated by stylised shoulder pads and this dynamic informs the organic curved “triangular” shape that is reproduced across the range from flyers through to weapons platforms.

Jes discussed the Wraithknight at length. Not only is the Wraightknight an exaggerated realisation of the Eldar form, but it is a prime example of Jes’ use of “pace” and scale in a model. 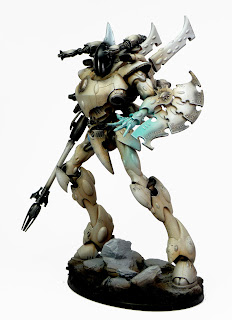 Jes referred to the proportions of the model and in particular the head. There have been mixed views aired concerning the size of the head, however the dis-proportionality is deliberate. Firstly, it is only for stylistic that the model has a head at all. It is not a cockpit and the live Eldar pilot is encased in the chest. Secondly, exaggerating the length of the legs and using a proportionately smaller head is a deliberate decision to assist in establishing the scale of the model.

The effect of the longer legs and smaller head is designed to create an impression that you or the soldiers on the ground are looking up at the model. It is also supposed to anchor the model in 28mm heroic scale. If the model remained in the same proportion as, say a guardian, then Jes reasoned that you would lose that sense of scale and it would simply seem like a blown up version of an existing model. This is well illustrated in the following comparison picture: 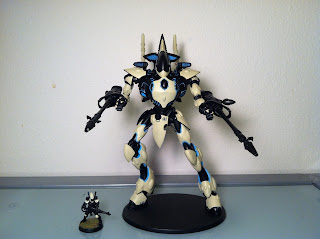 You can also see in the model Jes’ concept of “pace”. He wanted to add an element of detail to break up the model slightly and also to maintain the scale of the model. However, he also wanted to retain a sleekness to the model and to keep open areas on the model for painters.

With Games Workshop’s recent mining of old Second Edition and Epic/Space Marine concepts to enrich the current background, rules and design aesthetics, Jes discussed the re-envisaging in the Wraithknight of the old Eldar Knight concept from Space Marine. Naturally, the Bright Stallion came up. 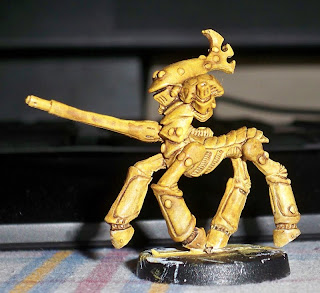 Epic Eldar Bright Stallion (from Projects of a Modelling Fanatic)

Jes confirmed that he had been bombarded by requests within the studio to remake the Bright Stallion when the prospect of an Eldar Knight kit came up. While not disparaging the old concept he was opposed to this. Firstly, he thought that it was a “novelty” design that might not replicate well in 28mm scale. Secondly, he wanted to keep the humanoid quality of the Eldar. He thought that the animalistic centaur design had been explored in the Chaos Space Marine Daemon Engines. Also, he sees the humanoid walker concept as a defining feature of the Craftworld Eldar.

As you would imagine the studio is protective when it comes to disclosing future release details. However, Phil and Jes were happy to talk about concepts that they like which have not yet been realised and that they would like to work on in future if the opportunity presented itself. They are both excited by the potential of the new supplement style releases to allow them to explore new concepts.

They did confirm that for now the main releases revolve around the plastic kits and that for each release period they have a limit on the number of sprues that they are allocated, across the whole release. Due to the costs of producing the plastic kits they are also naturally reluctant to redo existing plastic kits, although they would like to do so over time if the opportunity presents itself. Particular examples cited by Jes were the Jetbike and Viper Jetbike kits. Jes would like to redo these and there is already a concept model for the Jetbike, however for the current release Wraithguard were given the nod instead.

Going forward it seems that Jes is keen to explore the further potential of the Eldar Rangers. The possibilities presented by Exodite Eldar were also mentioned. As stated above, Jes is taking a long term view of Eldar development. He doesn’t want to rush everything out in a single release even if he could and certain concepts may have been help back as fuel for future releases.

There was also a discussion of the rules design process, however since this is first and foremost a painting and modelling blog I won’t go into that here.

Stay tuned for part 2 of our Enter the Citadel coverage - next up is a report of the "Here be Giants - Developing big kits" seminar.

Do you like our tutorials, reviews and reports? Here is what you can do to support us: Check out our sponsors in the upper right corner of our blog or place your next Wayland Games order by clicking here or on the banner on the right. Thank you very much, we appreciate any help to keep us going!
Chat / Event Reports / Guest Posts