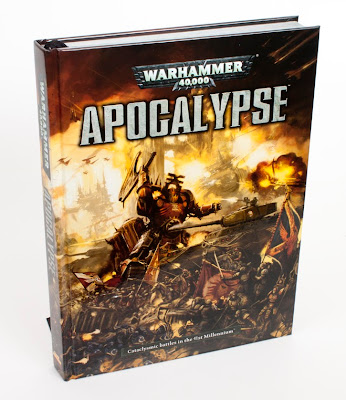 It's been nearly six years since Apocalypse was first released and now 2013 sees an updated release by Phil Kelly and Jervis Johnson. Full review after the jump. 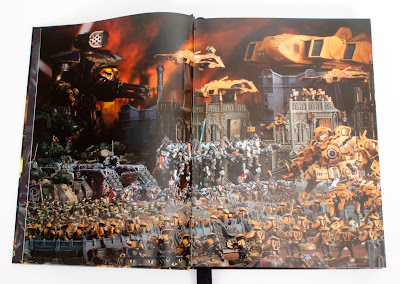 Just like the Warhammer 40,000 rulebook, the Apocalypse book is full colour throughout and features a lot of scenic set piece photography. The photography is gorgeous, a real treat for the eyes. It sets your imagination racing. 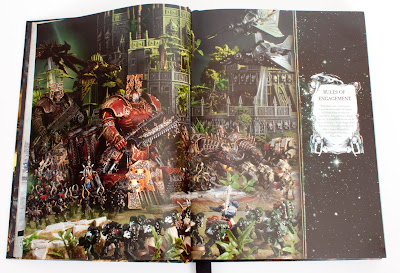 The book is laid out into 7 sections: Introduction, Rules of Engagement, Apocalypse Formations, Datasheets, Miniatures and Hobby Showcase, Warzone: Armegeddon and Appendices. The Introduction is 7 pages long and is what you've come to expect, basically what is Apocalypse and what do you need. The Rules of Engagement section is 42 pages long and explains how you play a game of Apocalypse. It includes lots more rules than its predecessor including Divine Intervention rules, which are race specific effects that are triggered during the game. Other rules include Finest Hour charts where your Warlord and units around him can get a rules boost. Finest Hour rules can be replaced by Marine armies with Sons of Primarch rules which are Chapter Specific. Very cool and characterful stuff. 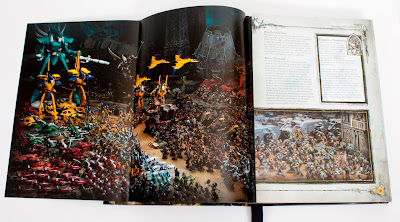 The book also includes large pull out spreads with more incredible battle scenes. This section also gives you the strategic assets which are laid out on the page in card format for you to photocopy and cut out. There are also 6 unique Apocalypse missions to fight out which is a big plus over it's predecessor which had only a single standard game format. 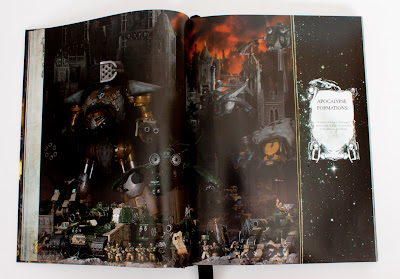 The 20 page section called Apocalypse Formations clearly explains how Datasheets have now been catagorised into groups. These groups include: Armoured Spearheads, Flyer Wings, Battle Formations, High Commands, Massive Fortifications, Psychic Choirs, Super Heavy Vehicles, Super Heavy Walkers, Super Heavy Flyers, Gargantuan Creatures and Flying Gragantuan Creatures and then explains all the additional rules that go with these categories. I really like the rules for Armoured Spearheads. Basically you arrange your tank formation around the massive Hellstorm template in different ways to get different rules. For instance the Arrowhead would have a single tank at the small end of the template facing away from the larger end of the template with the other tanks behind the first along both sides of the length of the template. If the tanks keep this formation they get the tank hunters special rule. There are three types of spearheads and Flyers follow the same rule if they have the Flyer Wings formation.

Destroyer weapon (D strength) has been cleaned up and now has a table you roll on to see how hull points / wounds you inflict. After the weapons section you 108 pages of Datasheets. The Datasheets have changed a little. They now feature a logo in the top right which dictates which formation category they fall into. More than half of the datasheet is filled up with a colour scenic photograph a paragraph of fluff. The rest of the datasheet has the special rules, formation composition, formation restrictions, points and stats. 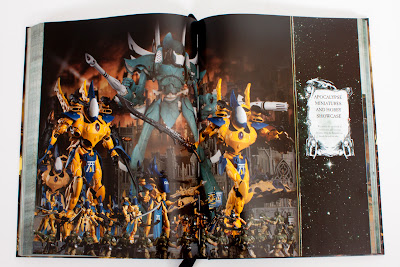 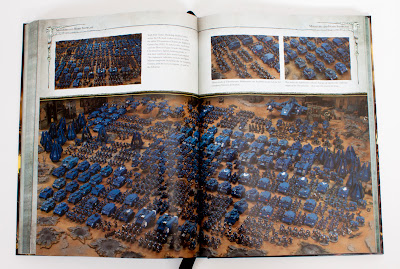 Minatures Showcase is you guessed it... a showcase of models. 39 pages of some pretty Eavy Metal models. There are also pictures of other hobbyists Apocalypse formations including the entire Ultramarines Chapter painted by Games Workshop store staff for the 2012 Gamesday. They did this in the 1990s... why would they paint a second Ultramarines Chapter? Why not paint Blood Angels or another Chapter? So odd. 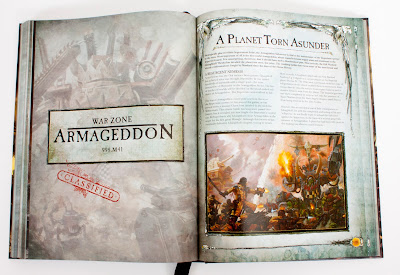 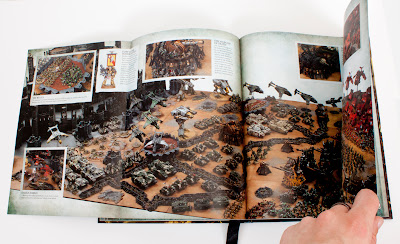 The 52 page section called Warzone: Armageddon is very cool. Loads of fluff, diagrams, maps, unit insignia, cut away Baneblade illustration, large pull out section and special rules. The special rules include terrain rules, Unnatural Disasters, three more missions, a further nine Strategic Assets to photocopy, plus Finest Hour rules for Yarrick, Ghazghkull Thraka and Captain Tycho. On top of all this you get a further 21 datasheets for Imperial and Ork forces. This war zone feature is really good. I hope they continue producing more warzone documents. I would love a Battle for Macragge one as I have two 15,000pt strong Apocalypse formations in the form of Ultramarines and Tyranids. 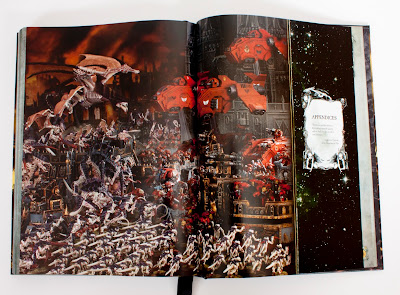 Conclusion:
It's good, it's laid out wonderfully and looks amazing. The pictures are a joy to look at and there is plenty of fluff to read and capture your imagination. Lots of new rules will add variety and create new tactical challenges. It's 10x better than the previous Apocalypse book but there are two things that are bothering me. Firstly the price. I've explained this above so lets leave that there. Secondly the datasheets
are bothering me. We get a lot of data sheets in the book. Way over 100, but there is hardly anything new for some races. For instance all of the Tyranid datasheets are existing datasheets that have just been updated with new rules. I've collected all these already so have nothing new to add! In fact they've dropped datasheets. There is no Scythed Hierodule in the book and there is no Warlord or Imperator Titan either with many more missing. Dark Eldar and Necrons do fare a lot better this time round.

Games Workshop 6th edition codices will only have rules for models in them if you can buy the models from Games Workshop. Without going into detail this Game Workshop policy to try and crack down on third party manufacturers making missing unit entries. This has had a massive effect on Apocalypse and basically means we probably won't see rules for Super heavies unless Games Workshop or Forge world make them. Bad news if you're scratch building an Imperator Titan. It would seem that the old data sheet are compatible, so fielding an Imperator titan is still possible if you own the original rules. It's just a shame that they didn't include anything like that in the new book.

My verdict is buy the book though. It's still awesome and worth the money, even if it is priced badly.

Do you like our tutorials and reviews? Here is what you can do to support us: Check out our sponsors in the upper right corner of our blog or place your next Wayland Games order by clicking here or on the banner on the right. Thank you very much, we appreciate any help to keep us going!