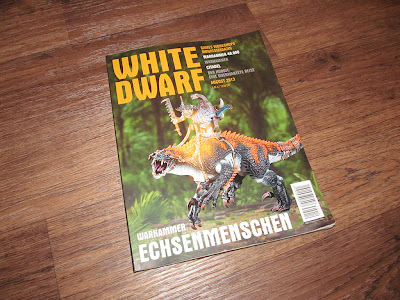 Another month, another issue of White Dwarf. Let's see what the WD team has come up with this time. At least I can tell you that: If you are into dinosaurs and power armour, this might be the issue for you. 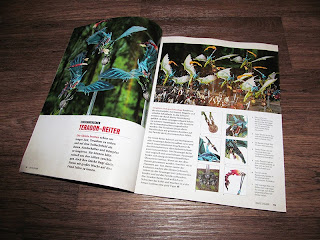 New Releases
40 pages of the latest products from Games Workshop, Forgeworld, Black Libary and licensed games. If you don't live under a rock, you already noticed that this month marks the release of the new Lizardmen army book along with three new plastic kits and a couple of characters. The colourful Lizardmen have always striked me as odd in a world full of grimdarkness, but I enjoy most of the new releases. I don't enjoy the double spread with the price list, GW still jack up their prices as much as possible with each new release. 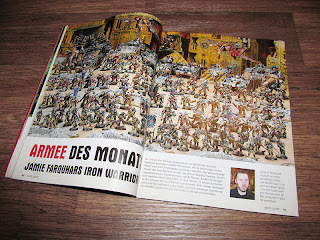 Army of the Month
6 pages dedicated to Jamie Farquhar's Iron Warriors. A huge army full of details, gruesome trophies and conversions. I really liked the bit when Jamie tells us that each trophy on his models was "earnt" with a victory in a game and that his former opponents always have a laugh when they see their army turned into a trophy on Jamie's models.

Jervis Johnson
Two pages of Jervis blathering on about how buying Citadel (TM) terrain is as important as buying models for your army and so much more awesome than scratch-built terrain.

Battle Report
It's Adam commanding a beautiful Lizardmen army painted by the hobby team (available as a 1-click collection for only £524.90 - seriously, if they are wondering what's wrong with Warhammer Fantasy and why it's popularity is fading, that's why - GW, you are pushing too big and expensive armies), facing against Andrew's Tomb Kings. 20 pages. 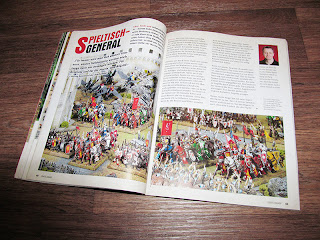 Armchair General
Duncan Rhodes shows off his Brets and talks about how he uses them on the battlefield. Wait, Brets? They haven't appeared in White Dwarf for years. Probably because the models are old and the whole army needs a massive reimagination. Anyways, it's still more of a chat and army showcase. I would like to see this series turning into a proper tactics article that focusses on a specific army and talks through unit choices and viable strategies. 6 pages. 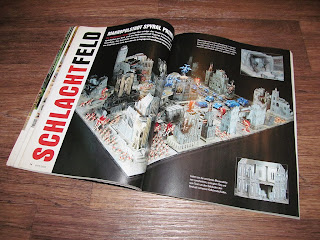 Battlefield
8 pages of (another) Warhammer World table. It's a cityfight table, and, surprise, it's made of bucketloads of Cityfight terrain kits that no sane person would ever be able to affort. Impressive, yes, but I would like to see something that isn't made from Cityfight buildings for once. 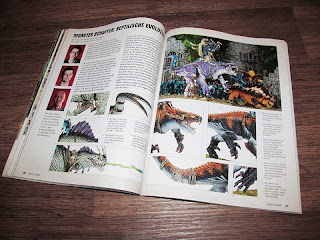 Creating Monsters
In this 8 pages spanning feature there is a lenghty interview with sculptors Seb Perbet, Matt Holland and Alex Hedström who are talking about the design of the new Lizardmen models. Nice. I love interviews with the creative people at the design studio. But what a bummer that they mention Seb's concept art but fail to show it.

War Diary - Armies on Parade 2013
Part three of this ongoing series, 4 pages. Not that spectacular this month, but I like Eddie's Harlequin jetbikes with riders converted of Dark Eldar Scourges. 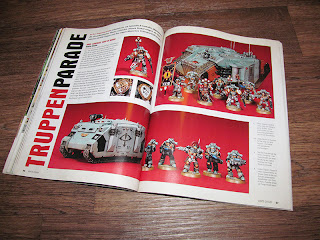 Parade Ground
8 pages of 40k units with their dedicated transports. It's a bit boring that there is only one entry that isn't power armour - Chris Pitchard's Wave Serpent and Fire Dragons. But I also enjoy Duncan Rhodes' Sons of Horus. It's nice to see some Forgeworld models that aren't weathered to death but painted in a more classic paint style. 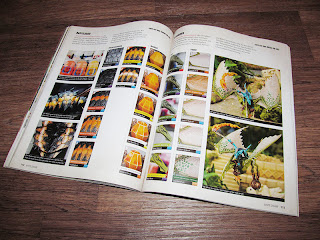 Paint Splatter
The usual 8 pages, divided into 6 pages with rather comprehensive painting guides for all the new Lizardmen models in a solid tabletop painting level,  and 2 pages that explain how the scenery from this month's Battlefield table was painted. Solid.

Jeremy Vetock
Talking about how you can't do justice to everyone in a gaming group. 2 pages. 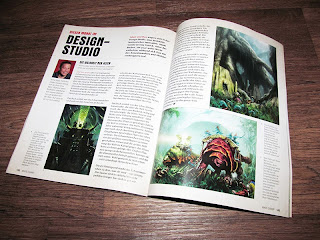 This month in...
... White Dwarf: 4 pages with the usual painting and gaming endeavors of the WD staff.
... the design studio: 2 pages of Jeremy Vetock talking about the background of the Lizardmen race, 2 pages of the studio hobby team explaining how they created the paint scheme of the Lizardmen army featured in the battle report, one page about the anatomy of Lizardmen with sculptors Seb and Matt, and finally one page with a nice Triarch Stalker and some Mighty Empire maps found around the studio.
... Forge World: 2 pages of Palatine Blades, a Legion Praetor in Terminator armour and the wrecked Tunderhawk Realm of Battle field.
... Black Library: A 2 page interview with Aaron Dembski-Bowden about his book "Armageddon".

Something special in this issue?
Nope.

Verdict
So yeah, it's a solid issue. What you would expect from an issue of White Dwarf nowadays, more of the same basically. In comparison to last month I like that the choice of articles is more diversified, but then I think it's boring that this issue basically comes down to Lizardmen and power armour. Especially in the Parade Ground and Kit Bash articles I would have liked to see more variety - how about some Tau Pathfinders in a Devilfish or some Trukk Boys for example?