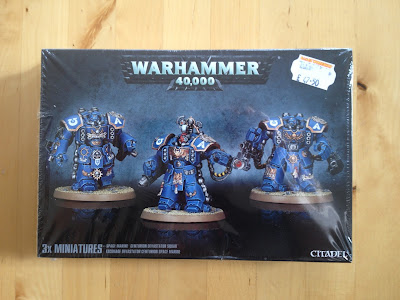 Love them or loathe them the Centurions have arrived and Tale of Painters are pleased to share with you an unboxing of this controversial new box set.  Read on to find out more. 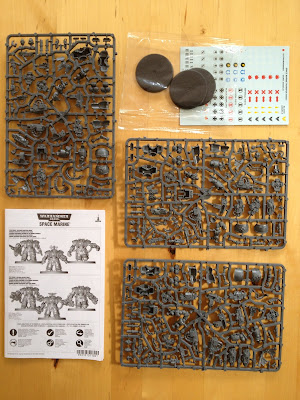 The box is slightly deeper then your average troop size box (225mm wide by 150mm high and 45mm deep). Stripping the shrink wrap away and opening the box you're confronted with three sprues, a bag of bases (50mm, that's 10mm bigger than terminators), a transfer (decals) sheet and an instruction sheet. At first I thought the sprues were all the same, but actually you get three unique sprues here! That's kinda cool, but does start to explain the expense of the box set. It's a lot more tooling to do then if they were to have just a single sprue. It is nice to have three models with different details sculpted on or three different bare heads or even different poses.

These guys are walking armouries. It's impressive that you now get every weapon option from the codex on the sprues. I remember back on the day having to scrabble around swapping and begging for special weapons for my tactical squads. 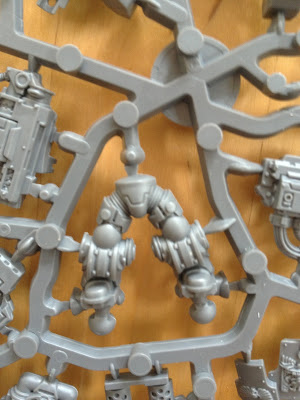 This I thought was really cool. When assembling the model you actually glue the armour to an actual pair of legs. With a bit of hacksawing I think you'll be able to get some better walking poses. In the picture above you can see the floating knee. I lot of people online have been complaining there is no knee, but actually there is and it's behind the armour. This is the same as MK6 corvus armour in my opinion. 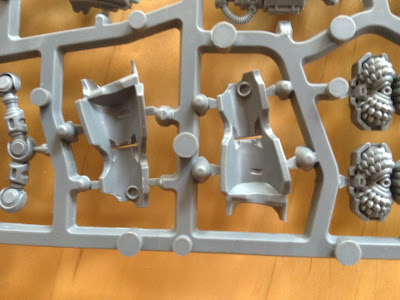 Here you can see the reverse of the leg armour. Quite easy to cut and reposition in a walking pose if you ask me. 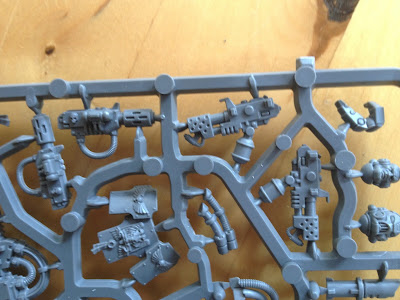 Now this for me is a huge plus. In the above picture you can see two flamers and two meltaguns. These weapons are mounted on the side of the siege drills. So if you don't use the siege drills your bitz box immediately benefits from a total of 6 meltaguns and 6 flamers! 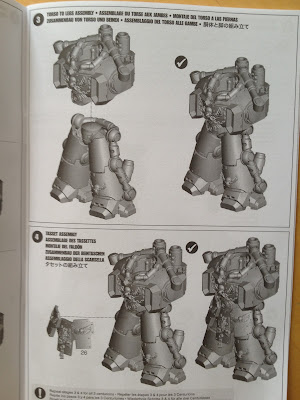 I thought I'd share this picture from the instructions. The thigh and crotch armour pieces are separate so you can leave off if you prefer. The torsos are on a ball joint. This gives us some articulation for poses. The head is also on a standard marine head ball joint so you can switch the heads out and replace if you want. The kit comes with three identical marine helmets and sergeant helmet with bionic eye which are described as a mix of terminator/standard marine helmets by the designer in White Dwarf this month. The sergeant's helmet also has an option to glue on a plume. You also get three unique bare heads. Each one different. These bare heads are beautiful sculpts. I'm thinking of saving them for special character conversions.

Verdict:
This box set features a whopping 175 pieces to make 3 unique models. The incredible amount of weapon options will leave you kitting out your other models with the spares (I'm thinking of adding spare siege drills to terminator models to represent chainfists). I really like the design of these. The idea of a devastator marine stepping into a war suit and it clamping down all around him as he picks up two heavy weapons is very exciting. It evokes imagery of Ripley in her power loader, the APUs from the matrix and hulkbuster ironman suit.

The downsides are the design and the price. The design is typical of Warhammer 40,000. It doesn't work. This is right up there with a rhino not being able to fit 10 marines inside. There are no where for the pilot's arms to go. The designer explained this in the White dwarf article saying "the arms are folded in front of the marine's chest". I don't buy that, firstly, if that is the case how's he controlling the suit? Secondly I don't think a marine with shoulder pads would be able to fold his arms across his chest. If the chest weapons were mounted above the head like a cyclone missile launcher then the chest area would look like it could house the arms and controls easily.

Now onto the price. These are a premium price at £47.50. This works out to roughly to 27p per piece and £15.83 per model. That is expensive in comparison to a lot of models. But if you compare to say the trolls from the Hobbit, then these work out slightly cheaper per figure and a lot cheaper per part. But if you compare to the river trolls for Orcs and Goblins then these Centurions are very expensive. The ultimate comparison though is with Obliterators. It's the chaos equivalent unit. You can get the finecast box of Obliterators for £31.50. £16 cheaper! Games Workshop has got the pricing so wrong on this box set which is a real shame, because I would like another three of these but I just won't buy them. One box is enough.

Do you like our tutorials and reviews? Here is what you can do to support us: Check out our sponsors in the upper right corner of our blog or place your next Wayland Games order by clicking here or on the banner on the right. Thank you very much, we appreciate any help to keep us going!