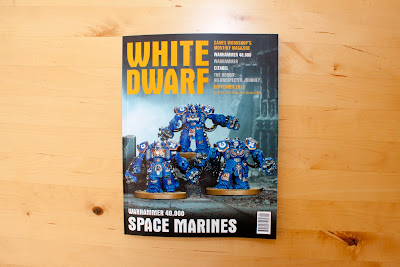 This month White Dwarf covers the release of Codex Space Marines and all the new kits that go with it. Tale of Painters takes our monthly look at White Dwarf and offer our verdict this 152 page magazine. Read on after the jump. 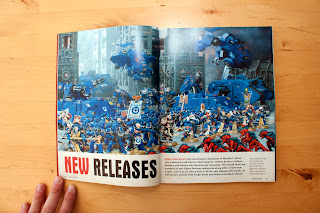 New Releases
New releases is often criticised as being the catalogue pages of the magazine. This is unfair in my opinion because how else will you communicate the new releases? I actually find these pages really useful and enjoy reading the succinct notes from the White Dwarf crew explaining number of components on sprue or showing some sample pages of the latest codices. The most interesting thing to note in this release are there are no finecast models what's so ever. Instead we're blessed with nine plastic box sets. Fantastic news and I'd like to applaud Games Workshop for this. The prices on the other hand are for each individual hobbyist to make their own judgement on and for me they don't form  part of this review of hobby magazine. 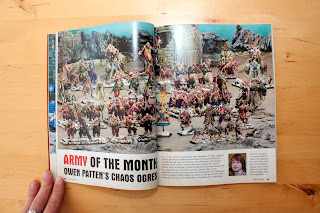 Army of the Month
Army of the month is it's usual six pages long and features Own Patton's impressively converted Chaos Ogre force. This army is lovely and you can spend ages looking at the pictures trying to work out what models he used to make his conversions. This article is much needed in this Space Marine heavy issue. 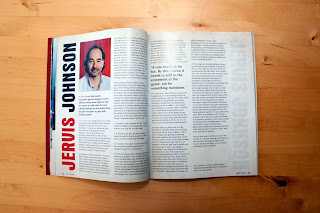 Jervis Johnson
This month Jervis uses his column to talk about how he comes up with rules. I've criticised Jervis in the past for stating the obvious and true to form this article explains that rules need to be evocative, fun and clear. The big pull out quote is testament to my annoyance of this article, click the picture above and read the quote if you want to know what Jervis means by "fun". Do we really need a big pull out quote telling us what fun is? Personally I would rather hear some amusing anecdotes they experienced in play testing, or models and ideas that didn't make it past the development stages. 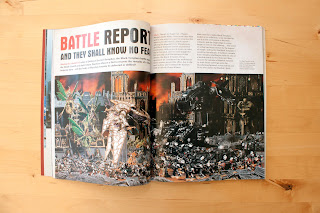 Battle Report
18 pages are dedicated to this month's battle report. Matt Hutson's Black Templars are out in force backed up by Centurions and a Hunter to fight off an allied force of Chaos Space Marines and Daemons of Chaos. The battle report is snappy, doesn't get bogged down in details easy to follow and interesting to see how destructive the new units are (Centurions with Grav guns FTW). Reading this article I've pretty much decided to buy some Centurions. Just wanted to point that out. The result is interesting as well. I won't spoil it, so check out White Dwarf if you want to know. I don't miss the maps anymore, I much prefer the larger photographs they've been adding and I'm starting to enjoy seeing the White Dwarf armies on a regular basis. It's actually quite cool to see models from a few months ago get some more magazine limelight. 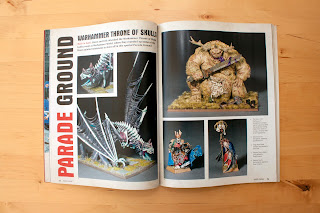 Parade Ground
Parade ground features models form April's Throne of Skulls hobby event. Many people have said White Dwarf should cover more events and report on them. I guess the problem White Dwarf have is they're working on the magazine four months in advance so events are old news by the time the magazine is published. However, it's nice to see reader models in the magazine and these models don't disappoint. We also get six pages of Battle ground showing us an Adeptus Mechanicus Damnos battlefield, it's made out of the usual Citadel kits, but some nice ideas in there still. 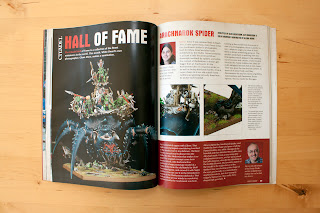 Hall of Fame
One of my favourite models makes Hall of Fame and it's really interesting to discover how they came up with the idea. Basically Jeremy Vetock had managed to get hold of a 3 up of one of the spider riders and was using it in his games and that got Alex and Aly thinking. I love these little insights. 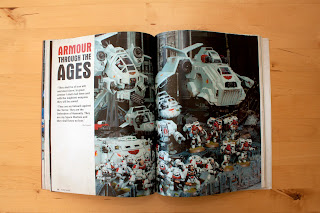 Armour through the Ages
8 pages talking to Jes Goodwin about the different armour marks. Some interesting information, like how the MK5 was rushed into production for the Heresy and because of this it suffers from over heating, hence why a lot of the cables are on the outside. Shockingly the second paragraph from Andrew Kenrick states how he sat down with Jes and sketchbook to talk about marine design and yet they don't show any sketches at all. Also in an article about armour marks we don't see any Forge World models. It's a good article which just fell short of greatness. 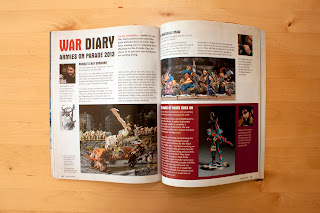 War Diaries
War diaries is a six page article charting the progress of several Nottingham employees' armies on display boards. The level of painting in this article is really impressive. I get the impression they're teasing us by showing us one or two models whilst talking about far more. I really like the way White Dwarf writer Dan got two whole pages to himself though... perks of the job! Not that I'm complaining, his Empire force is a joy to behold. 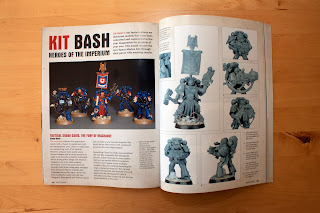 Kit Bash
Kit bash should be renamed and called "weapon and head swap". The conversions are just part swaps. I want to see some amazing conversions with greenstuff sculpting. I like seeing a conversion where I can't even guess where the parts come from but it looks like a completely new model. I wouldn't class any of these as conversions. They're just assemblies. Disappointed I'm afraid. 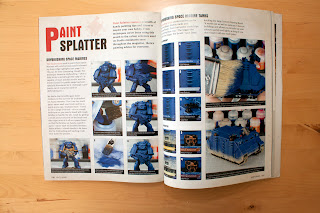 Paint Splatter
Paint splatter has been getting better and better in recent months. We get 8 pages comprising of 26 guides (that includes counting the 9 company shoulder pad guides as a single guide). Either way it's quite impressive for the majority of painters out there. No mention of the new Hobby spray primers, but I guess with this issue being produced 4 months in advance they weren't privy to that information. 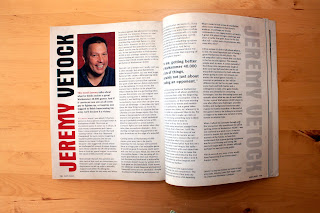 Jeremy Vetock
Jeremy Vetock has a really warm and funny style of writing. He talks a lot of sense and isn't patronising. He's actually the kinda guy you'd love to buy a pint and chat to. I really like his articles and whilst he doesn't talk about anything that interesting he's still a joy to read. 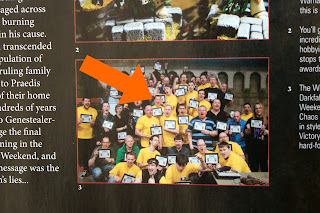 Who's this...
I've snuck this in my review. On page 128 my good friend Nick who I've known for over a decade now, is in White Dwarf. Some of you may know Nick by his online persona "Haywire Grenade". He sent me a text challenging me to find him in the magazine in a "Where's Wally (Waldo)" kind of way. Well I found him and the above picture is the proof. Well done Nick for getting in the magazine! 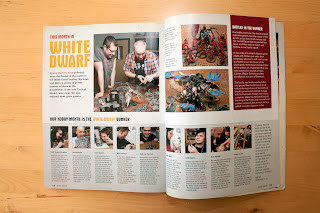 This month in...
I've skipped the What's on and Where to buy section. It's the same every month. I'm still of the opinion in the age of technology they could replace the listings of stores with a single QR code. Anyway onto the final section which is This month in. As I've mentioned I like the little insights and this section is all about that. We discover that Beth has big news about her role within White Dwarf. It's a shame we didn't get to see more of her work in the Magazine.

We also get designer's notes. (Sorry Stahly no concept sketches here either). I love Andrew Kenrick's last question to Dave Thomas on designing the Centurions "one last question: where are the pilots arms?" Haha brilliant. You'll have to buy the magazine if you want to find out. Great little insights though. Robin Cruddace talks codex space marines and Kevin Chin shows off some amazing artwork from the Codex. Seriously the pictures are incredibly inspiring. I want to stop writing this and pick up my brushes. Finally Forge World show off what they're working including Erebus and Kor Phaeron. Simply breath taking sculpts.

Something special in this issue?
No freebies or extra foldouts.

Verdict
Quite possibly the best new style White Dwarf we've had so far. They've trimmed away all the bad things like tiny pictures in the battle reports, weird lighting effects on models and the awful Armchair General articles and started to put in relevant content. New White Dwarf isn't about rules, or extra missions, or what kind of rules to expect in the new Codex. It's more about inspiring hobby content and I get that. I'm really enjoying seeing the White Dwarf crew's armies every month and seeing what they've added to them. I throughly enjoyed spending my Saturday morning reading my White Dwarf sat in my beanbag. I can't wait until next month's now. I wanted to give this issue an 8 but the lack of concept drawings pulled it back to 7.5. In fact I've just realised there is no Hobbit coverage at all in this magazine. Absolutely nothing. I didn't really notice when I was reading the magazine because I was caught up in all the excitement but because of this I'm going to lower the score to a 7.