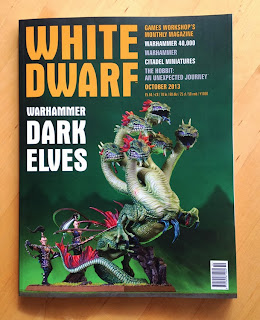 I wanted to title this post White Garf because my Ultramarines are featured in army of the month.  I actually wasn't going to do the review this month because I was concerned I would be biassed and give it 10/10. I'll remain as professional as I can. Read on to see what this month's 152 hobby magazine has to offer.
This month I tried something different. I avoided the leaked pictures online. My enjoyment of the magazine was instantly doubled. I'm going to try and do this from now on because I pay for a subscription. 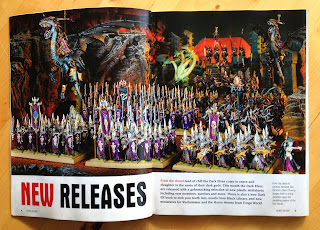 New Releases
New releases is 38 pages of the latest hobby releases. This month we see the arrival of Dark Elves. Interestingly, there are no finecast releases for the second month in a row. The Dark Elf fans are treated to two huge plastics kits in the form of the Couldron of Blood and the Kharribdyss/War Hydra. Then they get to regiment box sets featuring Dark Elf Warriors and Witch Elves and a plastic blister. . The release schedule this month seems a bit light, almost as if it is missing some Hobbit models or something. Fantastic photography this month. The coloured lights are still there but it's a really subtle green that doesn't obstruct the paint jobs. It actually enhances the photography and adds character to the shot rather than a plain white background. 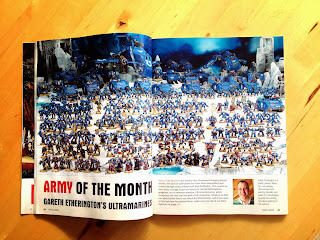 Army of the Month
Army of the month is indeed my very own Ultramarine Apocalypse army. Look at my little grinning face, I'm so proud! This is the largest army new look White Dwarf has featured in Army of the Month and for the first time the feature gets 8 pages. I hope they keep this feature as 8 pages. I urge you all to buy this month's issue just to see the photograph of the Thunderhawk flying low through some streets. It looks incredible. 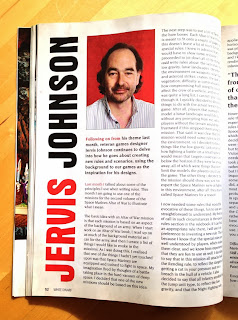 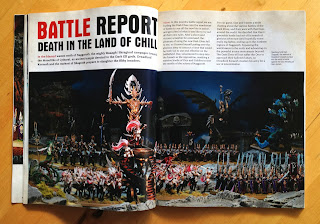 Battle Report
The battle report is 18 pages long and features Adam Troke using the Studio's Dark Elves vs Dan harden using the Studio's Orc and Goblin force. Nice thing to note is in the past couple of issues they've started including point values in the army lists again. Very useful information. Large pictures with annotated notes help keep track of the action. A few rules crept in this month including what Murderous Prowess does. This kind of information is a real bonus to people trying to make up their minds if they want to start a Dark Elf army or not. It's a nice feature and it's nice to see two armies we haven't seen much of. 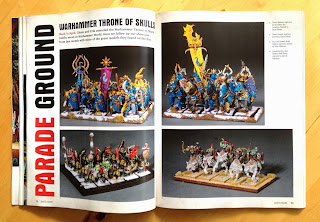 Parade Ground
This is the first of two Parade Ground articles. It's 8 pages showing some of the best models that competed at the Warhammer Throne of Skulls Tournament earlier in the year. Remember White Dwarf is produced something like 3 to 4 months in advance, so whilst this event happened in April it's still really cool to see models from the event. It would be nice if the event had a write up. It would be an interesting read if they included an interview with the tournament winner. 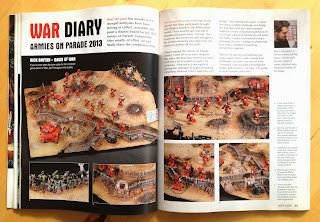 War Diary
This article really comes to life this month as we're treated with the final board displays. Every single one of these looks amazing. They look even better on the iPad because you can pinch to zoom on the large pictures. 14 pages of cool hobby goodness. 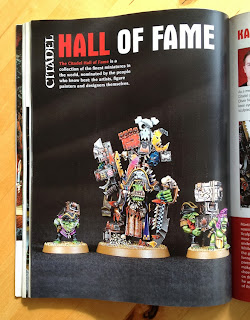 Hall of Fame
Two pages. This month Oliver Norman chooses Martin Footitt's Kaptain Badruk. It's a modern classic that's for sure and the amount of detail in the piece makes it a worthy addition. 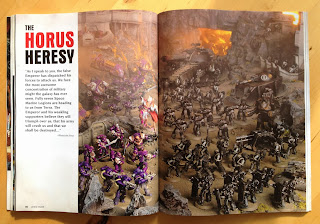 The Horus Heresy
This is an 8 page article introducing the the next Horus Heresy book called Massacre. This is a really good interview and goes into plenty of detail. The pictures of all the Forge World models are gorgeous including the models from the Mechanicum. 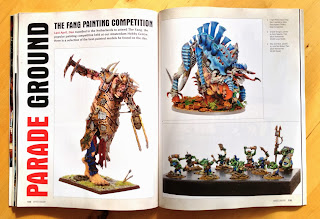 Parade Ground
This is the second Parade Ground we're treated to. Dan Harden travels to the Netherlands back in April and brings back pictures from the Fang painting competition. Six pages of high quality painting. Out of twelve pictures, only two are first place winners. Six of the pictures show third place entries. So next year if you want to get into White Dwarf, aim to come third in the painting competition. 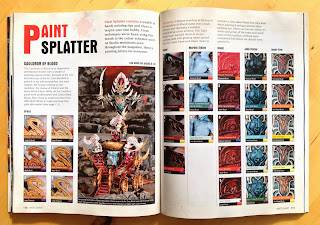 Paint Splatter
Eight pages in this month's paint splatter. Six of which are how to paint Dark Elf models and two of the pages are how to paint my Ultramarines. This is actually my own tutorial. I took the photos and sent them to White Dwarf and they decided to use everything. There are quite a few tips and notes scattered throughout this article. These extra paragraphs that explain techniques are really insightful and Paint Splatter is all the better for it. 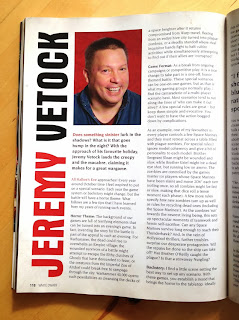 Jeremy Vetock
Jeremy Vetock goes into detail about how every year he organises a Halloween horror game for his gaming group. Very interesting and the excerpt from his back story is very funny. As usual it's a great read. 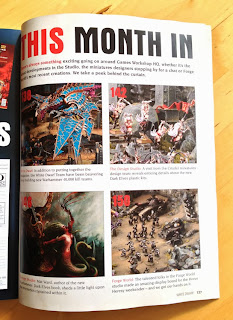 This month in...
I've skipped the What's on and Where to buy section. It's the same every month. I'm now lead to believe that the store listings are required as part of the deal with Independent stockists. This month in is an insightful section showing us behind the scenes of White Dwarf, The Design Studio and Forge World. We're greeted with a new member of the team; Melissa who replaces Beth as Digital Editor. We also get to see some really cool small 40k forces from Jes, Matt, Erik and Andrew. I hope we get to see more of these forces as they grow. The design studio are interviewed and explain the thought processes for Dark Elves. Stahly will be pleased as there is a piece of cool concept art in this section. The Forge World section shows part of their dropsite terrain board, Son's of Horus Reaver Attack Squad and the Troll Mother. Parting Shot is a nice Wood Elf scene.

Verdict
10 out of 10! Highlights being the Ultramarine Army and the Ultramarine Paint Splatter. Ok, being professional didn't last long did it... In all seriousness this is my favourite issue. It was great to see Orcs in the battle report (I collect Orcs and Goblins), it was great to see tournament level painting and competition level painting in two different parade grounds. It was good that there was no kit bash which for me has been a weak feature for quite a while now. It was good there was no Blanchitsu which was getting samey. I don't mind it returning, just not every month. No arm chair general is another plus because it's basically another army showcase because they don't go into any kind of real tactics. The photography is getting better and better. That thunderhawk shot is breathtaking. I want it as a framed picture on my wall. We also got a concept art picture. There was also a good mix of different races represented throughout the magazine and we were treated to an insightful Forgeworld Article.

So for me there wasn't much in the way of filler. It was all great content. I'm going to give this issue 8/10.  If it had some Hobbit content it would have been an 9 and if it had a free model on the cover it would have been the perfect 10.