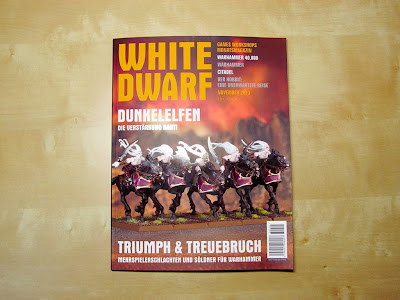 There is a lot of stuff coming out this month: new models, new expansion books and new paints. That offers a lot of potential for November's issue of White Dwarf, doesn't it? Read on for a walk through the issue and our comments and criticism. 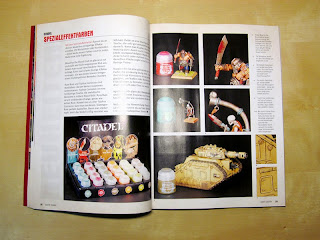 New Releases
This month's new releases section is quite long with 52 pages, because the White Dwarf team has lots to show off: Wave 2 of the Dark Elf release, the Warhammer expansion Triumph & Treachery, a new Apocalypse Warzone book for 40k, the printed Black Legion supplement, a couple of new technical paints and the obligatory Christmas bundles. Of course, there is also a look at the latest Black Library products, and a feature of Forgeworld's Sicaran battle tank. 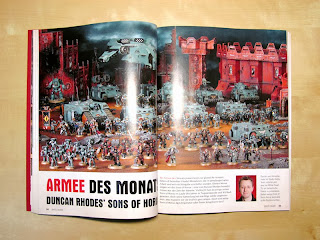 Army of the Month
... is Duncan Rhodes' Sons of Horus Legion army. Parts of it have been shown in WD before, but it's quite nice to see the whole collection. It's yet another Space Marine army for Army of the Month though. But I really like that he painted his marines in a traditional, bright tabletop painting style, a nice change as most people tend to use drab colours and lots of weathering on their Forgeworld models. The photography is brilliant, the pale green models in front of the red buildings make some really eye-catching pictures.

Jervis Johnson
... is talking about his most favourite hobby gear: templates. I'd say love it or leave it. 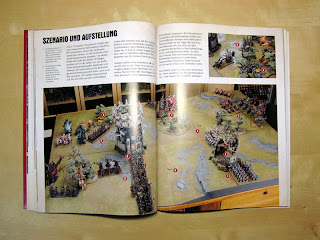 Battle Report
This one is quite unusual, as it doesn't introduce a new army but a new expansion. There a 5 players and 5 armies (Dark Elves with Lizardmen, Bretons, Warriors of Chaos with Tomb Kings, High Elves and Ogres). All in all I felt that the report did a good job of explaining what Triumph & Treachery is all about. The only thing I found irritating was the photography, which wasn't that great. Colours seemed pretty dull, some pictures could have been slightly sharper and there were were often harsh shadows and stuff in the background that you really didn't need to see. I recently flicked through a couple of old-style White Dwarfs and noticed that the photography of the battle reports was much clearer and better lit back then. 22 pages. 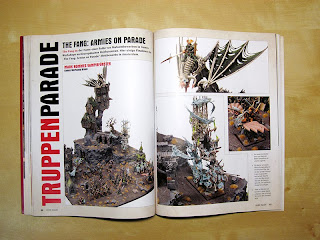 Parade Ground
The first Parade Ground in the issues features Army on Parade entries from The Fang, a competition held by GW Amsterdam. Some really good stuff there, especially Peter Zudgeests Emperor's Childred Legion army, which some might know from Warseer. Some pictures could have been a little bit brighter. 8 pages.

Blanchitsu
... is back with a four pages long article that displays two battlefields by Neil Reed. One is snow-covered, the other one a slimey Space Hulk. Both are heavily weathered and are kind of influenced by John's impressionistic art style. It's hard to explain, you have to see it by yourself. 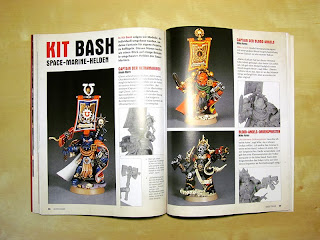 Kit Bash
The obligatory token Space Marine article. It features 6 pages of guess it... Space Marine characters. Most of them just have a head or arm swap. Boring. 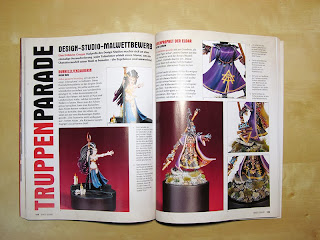 Parade Ground
The second Parade Ground is made up of entries from a painting competition at the design studio. A couple of 'Eavy Metal guys and other gifted painters from the studio display a stunning collection of brilliantly painted character sculpts. My favourite one has to be Darren Latham's Ulthwé Farseer (of course). And, as in every painting competition, there has to be at least one Nurgle Chaos Lord. 8 pages in total. 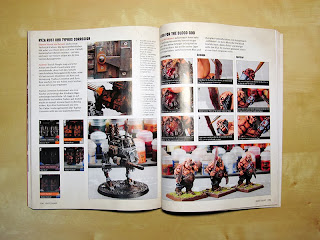 Paint Splatter
... has two pages of painting Black Guard and Executioners. On another 4 pages the use of every of the new technical paints is explained. Interesting, but short.

Jeremy Vetock
... talks about keeping a painting diary. You should better start a blog Jeremy ;) 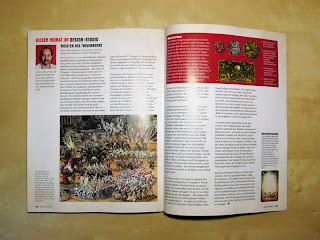 This month in...
... White Dwarf: The WD team show their lates painting endeavours, as well as sharing some pictures from the "Enter the Citadel" event (the November issue gets finished in July). Dan, when you read this, please sneak in some more pictures of your Wraithknight in a future issue ;)
... the design studio: On four pages, the sculptors talk about each one of the new Dark Elf kits and the thoughts behind their design. They also reveal why the chariot has only a single wheel. On another 2 pages, Jervis talks about writing Triumph & Treachery.
... Forgeworld: 2 pages with WIP models of the Deimos pattern Vindicator and the Legion Assault Claw.
... Black Library: A 2 pages long interview with Dan Abnett about his latest HH novel "The Unremembered Empire".

Verdict
I found this issue not as good as last month for a couple of reasons. Firstly, I felt that the long new releases section and the long battle report took away too much pages that could have been used elsewhere. An issue I had with the Apocalypse issue, too. Paint Splatter was shorter than usual for example, and the issue could have done with one or two more articles for more variety. Something like the War Diary series or an in-depth feature like last month's Horus Heresy coverage was missing. Secondly, there were some duds like the Space Marine Kit Bash. What stood out for me most was the second Parade Ground article with the painting competition. But then even that was missing something for, as they said it was a competition but no winner was chosen. All in all, 6/10 from me.