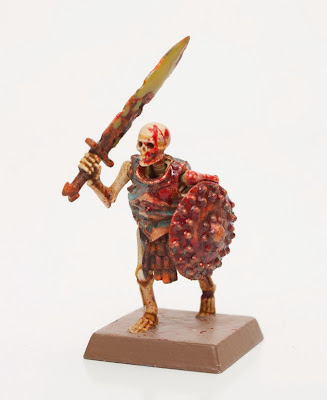 This is a review of the new technical paints from Citadel and a tutorial on how I painted the above Skeleton. More after the jump. 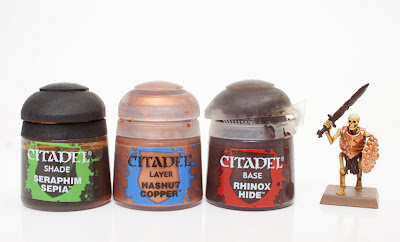 I've used a skeleton for a test model. He was sprayed white and then washed with Seraphim Sepia. His blade and loin cloth were painted with Rhinox Hide and his bronze armour was painted with Hashut Copper. Lets see if the new technical paints can turn him into something cool. 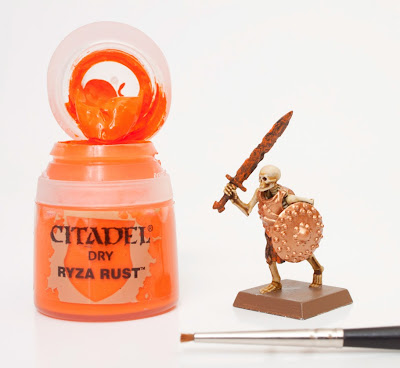 Ryza Rust
This is a dry compound paint. If you're unfamiliar with this range then it's essentially a really thick paint. it has no fluidity. It's been specifically designed to be dry brushed. Dry brushing is where you load up a brush with paint and then wipe off 95% of the paint on a tissue and then brush across the raised area of a model. I found that stippling was more effective in applying this paint. I made my stipple brush by taking an old brush and cutting the bristles down. To stipple you your stipple brush tip into the paint, then a couple of dabs onto a tissue and then you dab away at the area you wish to cover. This rust effect is quite nice and completely different to Modelmate's rust effect. 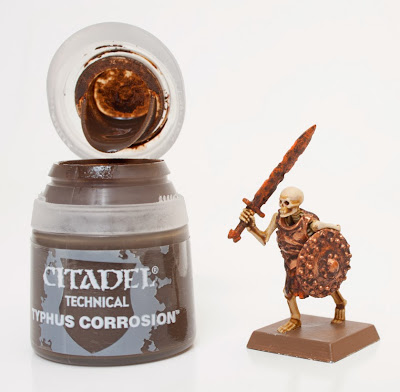 Typhus Corrosion
Typhus Corrosion is a technical paint with the consistency of a shade but with grit in the paint like a texture paint. Having spoken to Stahly, he says it's exactly the same as Vallejo Game Colour Smokey Ink. I've used it here to dirty up the brass. I think it will be a great paint for vehicles. If you plan on using it for vehicles then buy lots. 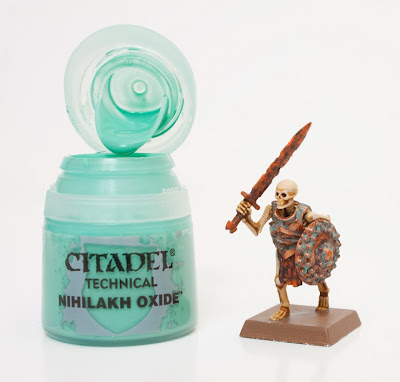 Nihilakh Oxide
Apart from the name looking like a bad hand at Scrabble this paint is a technical paint it's really fluid like a shade but has the opacity of a layer paint. So you get a nice strong colour that runs into the recesses. It's actually a really good effect and works really well. I think it works slightly better then watering down a turquoise colour as well. To apply the paint use a detail brush and paint it in the areas you want it. Don't paint it all over, it's too much. 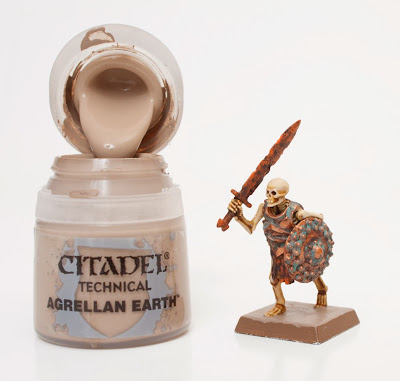 Agrellan Earth
Despite numerous tests and waiting hours. My paint didn't crack. Really disappointed. I'm returning  the paint. I'll post my opinions on it once I receive a replacement. I really hope this is limited to this pot or a small number. The edges of the base were painted with Steel Legion Drab. 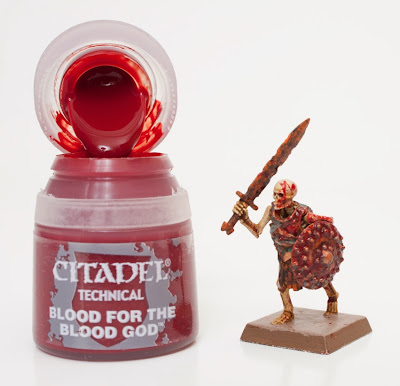 Blood for the Blood God
This has got to be the coolest name for a paint ever. I'm a big fan of Tamiya clear red. So this has a lot to live up to. Initial impression opening the pot is it's not translucent like Tamiya clear read. It's opaque. To apply it to the model I loaded up a brush held the model over some old newspaper placed the brush in front of my mouth and with quick sharp puff of breath I added spatter to the model. A little too much spatter to the shield but it kinda looks cool. It's dried a little translucent and it is gloss and looks wet. This is a cheaper, easier to obtain alternative to Tamiya clear red but I still prefer Tamiya's equivalent. I wonder what Blood Angel armour would look like painted with this paint? 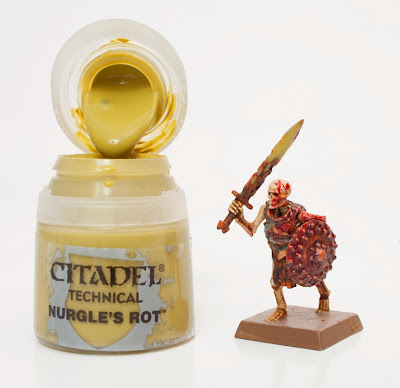 Nurgle's Rot
This thick, gloopy, gloss paint is suppose to represent pus and bile. The colour is yellowy green and quite bright. Whilst it is thick, I kinda wished the consistency was like the slime you got as a kid with your ghostbuster toys. I wanted to drip it on to the models and let it dry dripping off the model. This won't do that sadly. You just paint it on and you get shiny green goo effect. It does dry slightly transparent on raised areas. To apply this paint just slap it on thick with an old brush. Doesn't take too long to dry which is good. So the example above isn't a good example so below you can see a better example of how this paint looks. 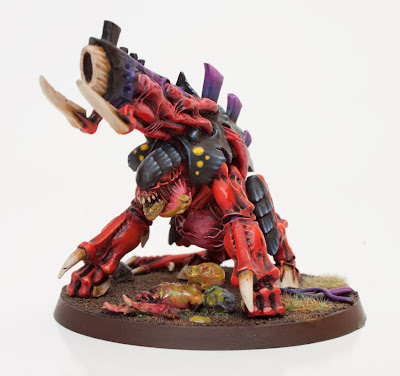 Conclusion
I was slightly skeptical when the new paints were announced, because I have existing paints and methods to achieve these effects. However I am really impressed with them (except Agrellan Earth). The only paint I think that is truly unnecessary is Ryza Rust. It isn't a true rust paint. I think this would have been better if it was an orange texture paint (fine grit in it). Being a dry brush paint doesn't make sense. You wouldn't dry brush the rust because that would pick up on the raised edges. Rust settles where water settles, typically in recesses but stippling fixes that, however, you can stipple any orange paint and get the same result. Typhus Corrosion and Ryza Rust will make a good combo for Orks though.

I took a basic three colour tournament legal painted skeleton and turned it into something much cooler using every single one of these new paints. It was fast and simple. Imagine an army painted like this? Wouldn't take long and would look pretty effective.

Overall, the paints get a thumbs up from me and I look forward to experimenting with them more in the future.