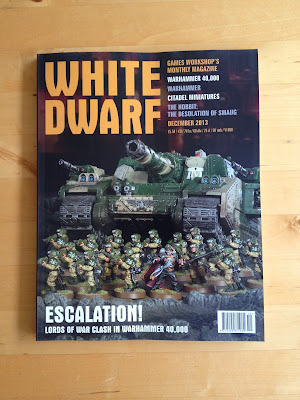 It's my favourite time of the month. No, not pay day! It's new White Dwarf time! Every month Tale of Painters aims to bring you a review of the latest magazine as soon as possible. So here is December's issue. 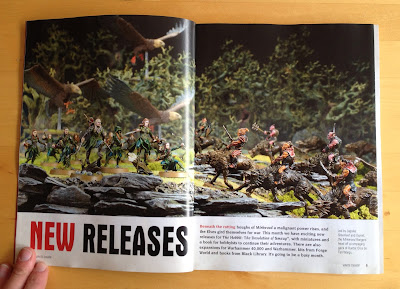 New Releases
There are releases for every game system this month. Two new expansion books for Warhammer 40,000, a campaign book for Warhammer Fantasy and a Hobbit Rules supplement. Prices of these books vary from £20 to £30. There are a plethora of Hobbit model releases mainly of the elven persuasion but some really cool Dwarves in barrels models. Other releases include Ultimate Space Marine Edition Codex (similar to the Chaos one), three new Black Libray novels, plus an art book for the Horus Heresy and a graphic novel for the Horus Heresy, which is a first! The interesting thing to note here is on the price list page it doesn't list if the models are Finecast or not. The box and clamshell artwork doesn't show if the models are Finecast or not either. This will further fuel the rumours of a move away from Finecast next year if they're changing the packaging already. 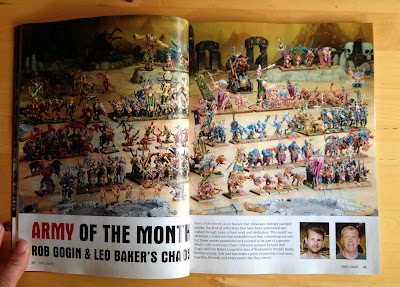 Army of the Month
... is by two painters: Rob Gogin and Leo Baker. Two people who are long time fans of Warhammer World's Battle Brother tournaments. The army is very reminiscent of late 1980's and early 1990's style of painting. It's beautifully bright and colourful, so much so you don't know where to look first. It's littered with interesting conversions. You'll be staring at the pages for a while trying to take it all in. It's 10 pages long which is the biggest this feature has been to date (my Ultramarines were 8 pages, it's usually 6 pages long). It's really nice to see this popular feature receive a nice number of pages. 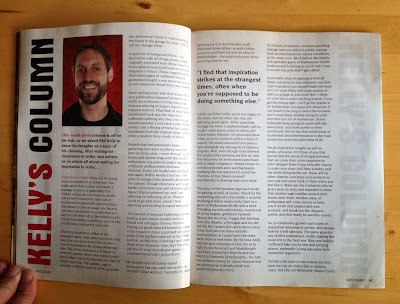 Jervis Johnson
... is Phil Kelly this month. I've been vocal about Jervis Johnnson's article being patronising and stating the obvious, so it was a breath of fresh air not having to read it this month. Phil Kelly is one of my heroes. Everything he touches is gold. This column is an interesting read and in insight into the mind of Phil Kelly. 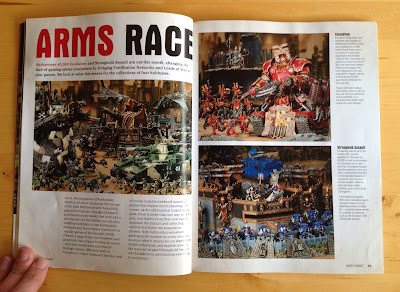 Arms Race
This article takes a look at four hobbyists and how they have adapted their collections to work with the two new Warhammer 40,000 expansions. Short and sweet but doesn't elude to what the expansions are actually about in any kind of detail. 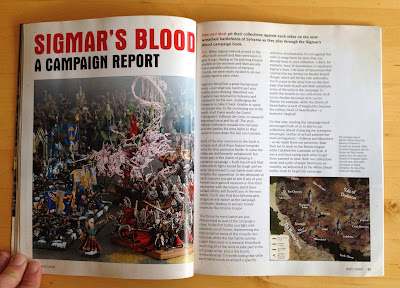 Battle Report
This month the battle report is actually an overview of a Campaign fought between Dan Harden's Empire and Matt Hutson's Vampire Counts. Story driven reporting with each battle getting a single page of photographs and explanatory text. It gives you an overview of how the linked scenarios work. It's  obvious the feature is trying to achieve too much in the limited space but fair play for them for giving it a go. The photography is gorgeous, really atmospheric with back lighting and smoke/mist. Really sets the tone for these two gorgeous armies. 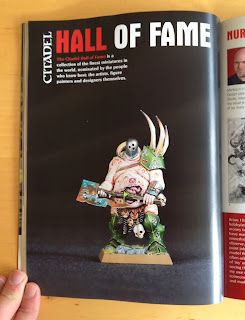 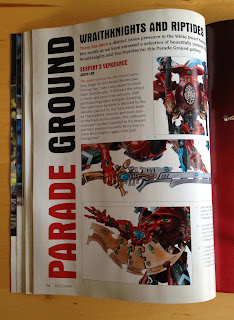 Parade Ground
The first instalment of Parade Ground has ten pages of Wraithknights and Riptides. If you love the big kits you'll like this feature. 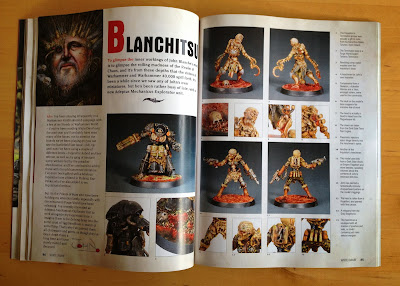 Blanchitsu
... is back with a four page long article that displays his Adeptus Mechanicus Explorator unit. Quite cool. His conversions are real conversions. You often can't tell where the parts came from which to me is the mark of a good conversion. 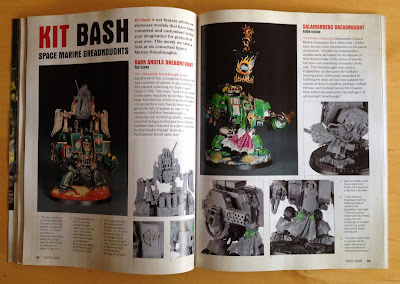 Kit Bash
Space Marine Dreadnoughts are the topic of kit bash this month. Some nice conversions using all many of different parts. It's better then the previous couple of kit bashes where they just show you how to glue space marine bits together in different ways (not a conversion!). It's frustrating that it is still Space Marines though. All those different races and we seem to be stuck on Space Marines. 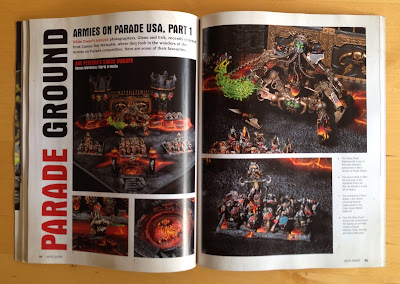 Parade Ground
The second Parade Ground is made up of Armies on Parade entries from America. These pages are gorgeous to look. We're spoilt with eight gorgeous armies in sixteen pages. The Chaos Dwarves are a jaw dropper. 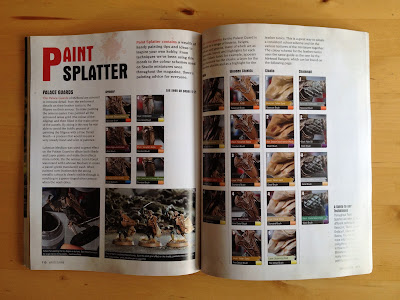 Paint Splatter
Just eight pages this month. We get complete guides for Mirkwood Rangers, Palace Guards and some additional notes for Thranduil, King of Mirkwood. Additional guides are for Adam's Dark Angels' Defence tower, Matt's Red Corsairs strongpoint, Matt's Mortis Engine and Dan's Wraighknight. I just want to draw your attention to Adam's Defence Network. Two things: firstly, it breaks the format of numbered boxes with the paint and brush they use. Instead it's a larger picture with a detailed note instead. It's so much better for it, it works better in this way as a tutorial! Secondly, Adam says he used the new Ryza Rust dry paint... but in the pictures it's watery and dries like the model mates rust effect?! Very odd. 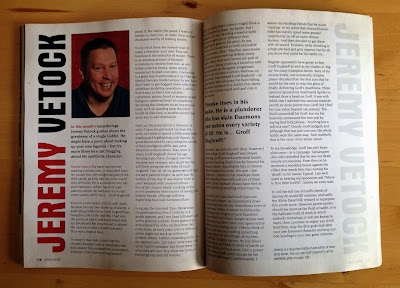 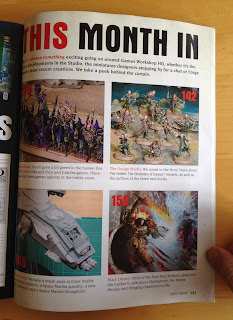 This month in...
We discover that Andrew Kenrick is leaving the team. Andrew was the Deputy Editor and has been the Editor of White Dwarf in the past. I've met Andrew and he's a really nice guy who clearly loves the hobby. It will be sad to see him leave. On behalf of Tale of Painters I'd like to wish him all the best in his future endeavours. I wonder who will be the next Deputy Editor? *Fingers crossed it's Dan*.

Oh yeah, I was reviewing this section wasn't I. There is an Orc and Goblin theme running through the White Dwarf bunker this month and we get to see recent new addition Mel's Orc Shaman as well as Jeremy's notoriously infamous Groff Dogbreff. We also see Adam's Minotaur force starting to grow, a Forgefiend from Matt and an Ungor Shaman conversion (simply genius) and a Beastman Ghorgan from Andrew.

The Design Studio try to explain the latest releases but are seriously short on space. three pages for the Hobbit, one page for the Fantasy Crusade book and two pages for the two new 40k expansions.

Nothing new to see in the Forge World section. It's a Fire Raptor, Realm of Battle Space Marine tile and XV107 Battlesuit.

Black Library get two pages and it's an interview with Neil Roberts.

Verdict
It's been over a year of new White Dwarf, so the angst and worry of change has subsided and we've all settled down with the new style of coffee table art book that is now White Dwarf. This issue is bursting with models from other painters. You get the eavy metal studio models in the new release section and then every page after that you have no idea what you're going to get. You could compare Old and new White Dwarf to listening to your favourite album in order, or on shuffle. Old White Dwarf you knew you would be getting all the latest released models painted by the eavy metal team. New White Dwarf you get a random selection from people who can still paint well but don't work for eavy metal team. I like this format, it's really inspirational to me who is a painter. I still feel gamers are getting let down big time though.  I give this issue 7.5/10 because it's got a bit of something for everyone including some Hobbit articles.