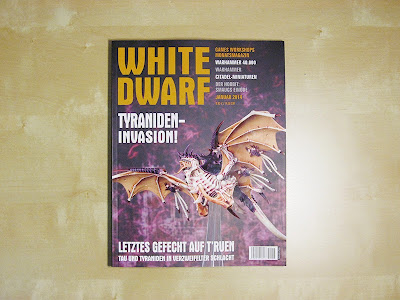 Another year, another round of White Dwarf reviews. If you follow the "what's new today" blog on GW.com, you already know there are four new people in the White Dwarf team and that they got big plans for 2014. Well, let's check the all-slimey and tentacle-y January issue and see if we can find anything new.


New Releases
The main focus of this month's new releases section are of course the new Tyranids. The gatefold section is taken by the Harpy and Hive Crone. There are lots of nice pictures to drool over, some of the new models are shown with alternate paint jobs of hive fleets Behemoth und Kraken. There are also a couple of pages dedicated to new Finecast Hobbit blisters, digital products, Black Library (including a short interview with Gav Thorpe about the Path of the Eldar omnibus), Forgeworld and licensed games. All in all 48 pages, about a third of the issue. 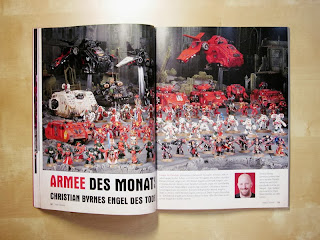 Army of the Month
...are the Angels of Darkness, a combined Dark Angels and Blood Angels force by Christian Byrne, displayed on 8 pages. I'm a big fan of Christian's paint style, please dear WD team, bring more of his models into the magazine (he has a great Evil Sunz army as well I heard). His Blood Angels have been shown about two years ago, but now he expanded his force with allied Dark Angels that sport a matching paint scheme. I really love it when the allies rules are used to create an army where character comes first and rule effects second. This article reminded me that I have to paint an allied contigent for my Ultramarines eventually as well.

Jervis Johnson
... talks about how fond he is of random tables on 2 pages. Another 2 pages with 5 tables for random magic items that can be used for Warhammer Fantasy. Yeah, optional rules in White Dwarf, when was the last time we have seen that? 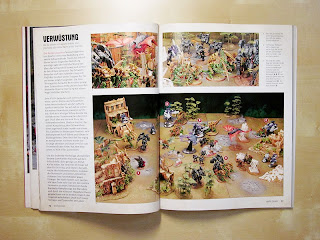 Battle Report
Can we find any of the big plans in this month's battle report? Dubbed "Last stand at T'ruen", it's an epic scenario where Jes' Tyranids clash against Dan's and Glenn's Tau. There are no force organisation charts, the Tau army is made up of only battle suits (including six beautifully painted Riptides), and Jes' Tyranids consist of only monstrous creatures (and there show up even more on the battlefield later). The article starts as usual with an overview of the armies and the setup and ends with a debrief, but inbetween it's more written like a story than an actual report.

I'm a bit indifferent to this, it sure has potential, but it's definately not for people who like to closely follow the process of a game. There is no indication of turns, so it's hard to track what happened when. If the WD team wants to keep this style up, I suggest adding subheadings for each turn for more structure and some player comments inbetween the "story elements", so it would retain a little sense for the gameplay .On the positive side, I noticed the photography is much improved. More cinematic perspectives, better illumination, and they even took the time to edit out the background on pictures where you see the whole table (so you won't get distracted by the messy WD hobby room ;). 20 pages.

Hall of Fame
This time it's the Techmarine model that was released with the 4th edition Space Marine codex. As his sculptor Juan Diaz no longer works for GW, ex 'Eavy Metal painter and sculptor Neil Green discusses the model instead. 2 pages

Blanchitsu
4 pages dedicated to Johan Egerkrans' Witch Hunters. As usual, there are some cool and very gothic conversions in there, but as the themes of Blanchitsu don't vary much, I think this section doesn't need to be in every issue. 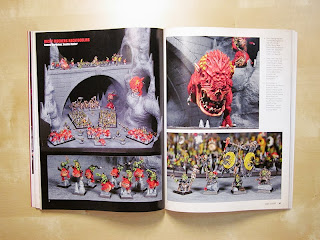 Parade Ground
... features the second part of Army on Parade entries from Games Day Memphis on 14 pages. And guess what, Tale of Painters makes another appearance in White Dwarf: This times it's our very own Xoxtile with his gorgeous Night Goblin army, showcased on four pages. Apart from Xoxtile, there are seven other entries: the well-known Adeptus Mechanicus display from Dave Taylor, also Chaos Space Marines of Nurgle, Dark Angels, two more Chaos Space Marines armies, Imperial Guard, High Elves and Space Wolves. There is only one problem I have with Army on Parade entries in WD. You want to take a picture of the whole board, but then the individual models are so small that you can hardly make out any details. Maybe the next time they should constrain the number of entries and have more close ups like they did with Xoxtile's Night Goblins.

Kit Bash
... is 8 pages dedicated to Ogre Mournfang cavalry this month. Maybe it's because I'm not a big Ogre fan, but I thought limiting an article to only one specific unit was a bit one-dimensional. 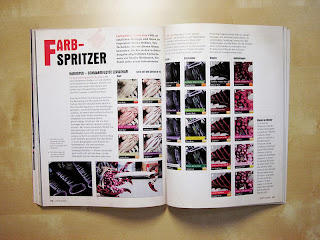 Paint Splatter
Is all dedicated to painting Tyranids. There are techniques for painting hive fleet Leviathan, Kraken and Behemoth on two pages each, displayed on the new models. Last but not least there are two more pages of batch painting Termagaunts. I really like how this section has evolved over the time, what used to be a mere conglomerate of step by step pictures, has become rich with advice and little hints here and there. A solid article, but wait for Garfy's more detailed painting tutorials on Tale of Painters, he will cover all three hive fleets in more detail ;)

Jeremy Vetock
... talks about how he breaks the hobby gently to other people. Another amusing read penned by Mr Vetock. 2 pages. 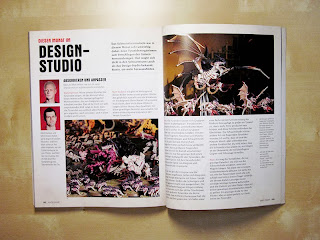 This month in...
... the White Dwarf team: 4 pages with the latest painting efforts of the team, including an orkified fortress of redemption by Dan most notably.
... the design studio: The first 4 pages are an interview with the sculptors Mark Harrison and Matt Holland, who sculpted the Haruspex/Exocrine and the Hive/Tyrand Guard. A good read, but I'm missing concept art and was a bit disappointed that they didn't mention the Epic prototypes of the Haruspex and Exocrine. The next 2 pages are an interview with Robin Cruddace, who muses about the horror of the Tyranid race, there are also two new artworks from the codex shown. As usual there is no talk about rule mechanics.
... in Forgeworld: There are WIP previews of a Sicaran Venator, Mechanicum Myrmidons and a Dread Saurian on 2 pages.
... in Black Library: 2 pages with an interview with Raymond Swanland, the artist of all the recent 40k codex covers and lots of Black Library novels.

Verdict
I felt this was a solid issue with good hobby content and neat model showcases. Most of all I enjoyed the army of the month and Xoxtile's Night Goblins. However, with over a year of the new direction of White Dwarf, with every issue I grow older of all the miniature showcases that make up most of the page count, despite the obvious quality of the displayed models. I would like some more written content to sink my teeth into, like tactic articles that help you with the first steps of a new army, as they had them when the Dark Eldar or Necron codex was released. I would also like to see more gaming material. Jervis' magic items table was a good start, and with all the supplements and dataslates GW is pumping out at the moment, surely they could find some dropped off scraps for the magazine? I feel it would make White Dwarf much more attractive to a group of buyers that draws their enjoyment of the hobby more from gaming. That would be a big plan for 2014.