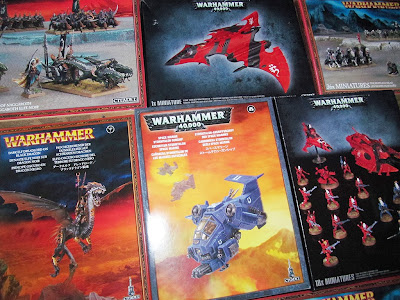 Garfy went first, now it's my turn for a hobby recap of 2013. I'm gonna present you all the models I painted last year and also give you an outlook on what I've planned hobby-wise in 2014. And why don't you check out my resolutions from last year and the year before and see, whether I was able to fulfil them or not.

January and February
In the beginning of 2013 I was busy in finishing the last couple of Escher models. A couple of years ago I won a complete set of all 20 of these classic Jes Goodwin sculpts on ebay, and at the end of 2012 I finally started to paint them. 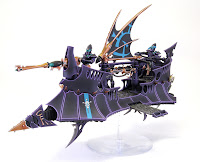 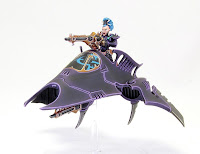 March to July
...were all dedicated to Garfy's and my Tale of Mega Painters challange. While Garfy bolstered his small Necron collection with the Necron megaforce from 2012, I started a completely new army with the Dark Eldar megaforce box set I had from christmas 2011. I started with Kabalite Warriors, followed by a Raider, five Scourges and a Venom. I remember that the Scourges took ages to paint, almost two months for just five models, it was insane.

August and September
In August I started a little side project from Tale of Mega Painters which I completed in September: A bike squad of five models for my Ultramarines, which were a nice distraction from my Dark Eldar as I hadn't painted power armour in a while. But I didn't forget my main project and painted a squad of Wyches inbetween, too. 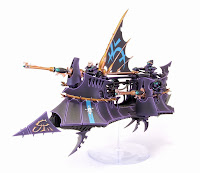 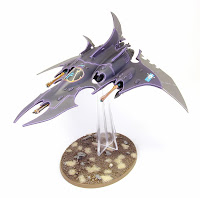 October to November
In the fourth and final quartal of 2013 my job became more and more demanding and as a result I didn't get that many models done. But those that I managed to paint were at least quality ones: there was a Ravager, Tigurius, five Trueborn Warriors, an Archon and most recently, the Razorwing. The most fond memories I have of Tigurius. I was really afraid of the banner as I rarely do freehands, but in the end it turned out quite nice which was very satisfying.

When I look back at my resolutions from last year, I was quite spot on, wasn't I? I wanted to paint a lot of Dark Eldar models - which I managed; I also managed to paint the bike squad and a Marine character, only the Land Raider still sits untouched in his box and will so for quite a while, because I bought a lot models last year which are more tempting ;)

Highs and Lows of 2013
My best hobby experience last year was to visit Warhammer World for the very first time and to meet Garfy there. It's really astounding how something trivial as toy soldiers can bring together two people from different countries, isn't it?

Most disappointing for me in 2013 was how GW cranked their prices up with every release, the lacklustre limited editions and the Eldar release. While I've grown to accept (to accept, not to like) the Crimson Hunter, I still can't get over of how badly proportioned the Wraithknight is. And how they shoved an Apocalypse sized unit into a regular codex. Or how the Eldar rules are still unimaginative and ill-fitting to their background. For my favourite army, I was expecting much more.

2014 Hobby Resolutions
While I sticked to essentially one army in 2013, this year I want to go wherever my inspiration takes me and paint whatever catches my fancy. I bought so many models last year, there is plenty to choose from. I would like to paint a couple more Sternguards and a Storm Talon for my Ultramarines, maybe another character like Marneus Calgar and his honour guard, too.

I bought lots of Eldar models, I want to paint at least some Rangers, Wraithguards and a Hornet in 2014. They won't be Saim-Hann though, as I'm gonna paint them in a turquoise Iybraesil paint scheme which will make heavy use of airbrushing (which will hopefully speeding up the painting). And then there might be more Dark Eldar, I would like to have an Incubi bodyguard for my Archon and paint some coven themed units like a Haemonculi or a Talon.

Apart from that, I bought a Dark Elf and two Vampire Counts strikeforces. Maybe I'll dabble a little bit in them. And last but not least I had the idea to paint a small force of Blood Angels, which would be mainly made up of Forgeworld Heresy era models, as an allied contingent for my Ultramarines.

What are your hobby resolutions for 2014?