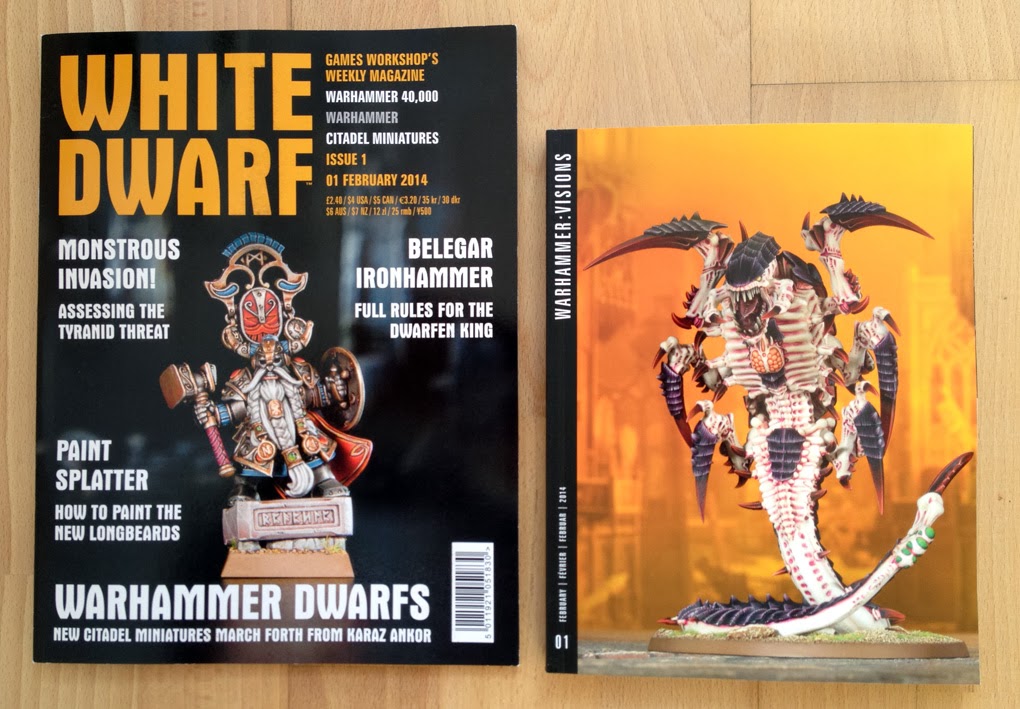 Some people didn't believe the first rumours, but now the day has come: The venerable monthly White Dwarf is no more, replaced by a thinner weekly edition and a new monthly magazine called Warhammer: Visions. In this combined post, Stahly takes a look at the first issue of White Dwarf Weekly, while Garfy shares his thoughts about Warhammer: Visions. Check out this epic review and learn what to expect from GW's new publications (and what not).

White Dwarf Weekly is offering 32 pages (including the cover) for 2.40 pounds/3,20 Euro. Size is the same as the monthly White Dwarf, as is the paper quality. There is no gloss/matte effect on the cover though or a fold-out. They didn't change the design much, I feel the pictures are a bit smaller and the pages are a bit more crammed though. Most noticable is the low page count. In fact, it's a very short magazine. 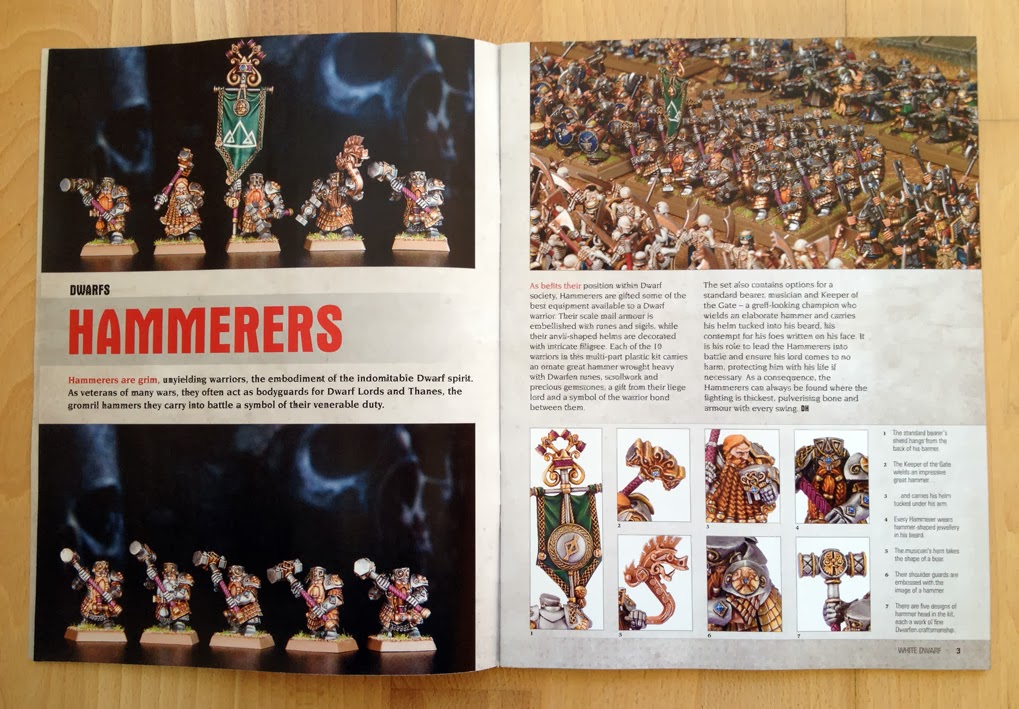 When you take a look at the contents list, you notice that they carried over a lot of features. As usually it starts with the new releases section, which makes up a large portion of the issue. A new addition is Sprue and Glue, a modelling guide which gives advice for using plastic glue this time. It's clearly aimed at beginners. I remember when I started out I found such articles in WD useful, so I'll let it pass. The article about Tyranids I found lacklustre. Even though four different people have their say about Tyranids, there is little advice except for "do what you think is cool". 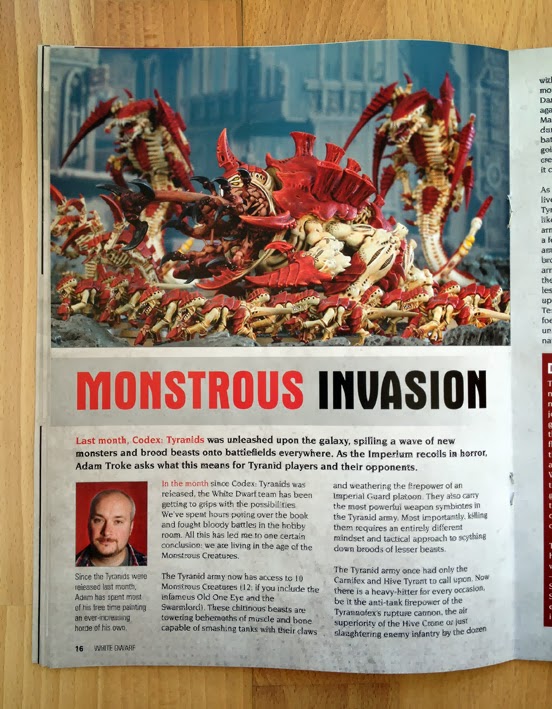 Also new is the inclusion of rules. As it seems, they won't release army books in the first week anymore, so there are the rules for Belagar Ironhammer that you can use until you get the book. Arguably useful. What I enjoyed was "This week in White Dwarf", 5 pages mixed with all kinds of funny blobs and pieces. Amongst others, there was a page with Dwarf trivia, some designer notes on Belagar, funny excerpts from various army books, a reader model of the week and a tongue-in-cheek Q&A. 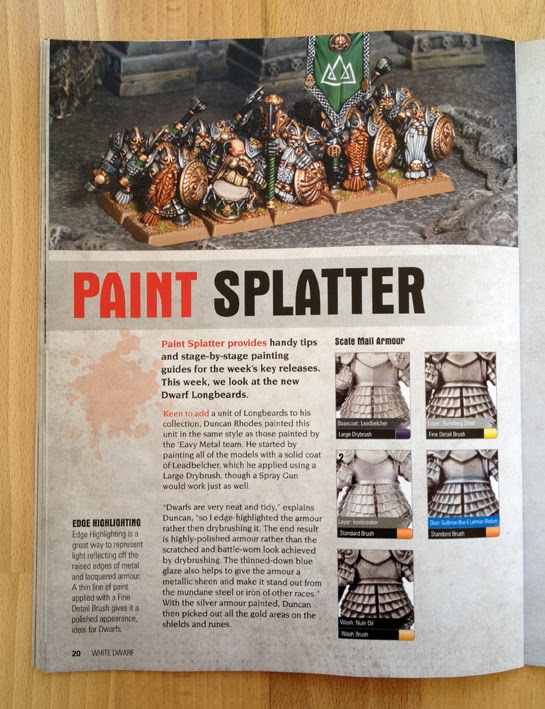 In general, you can say that they took everything from old White Dwarf but did away with the showcase sections like Parade Ground or Kitbash, which can now be found in Warhammer: Visions. However, I feel that the showcases in the old "monthly" WD added a good portion of variety to the magazine. Weekly WD is all about the releases of the week and not much else. There might be little reason to pick up this magazine for someone who isn't interested in Longbeards or Hammerers. 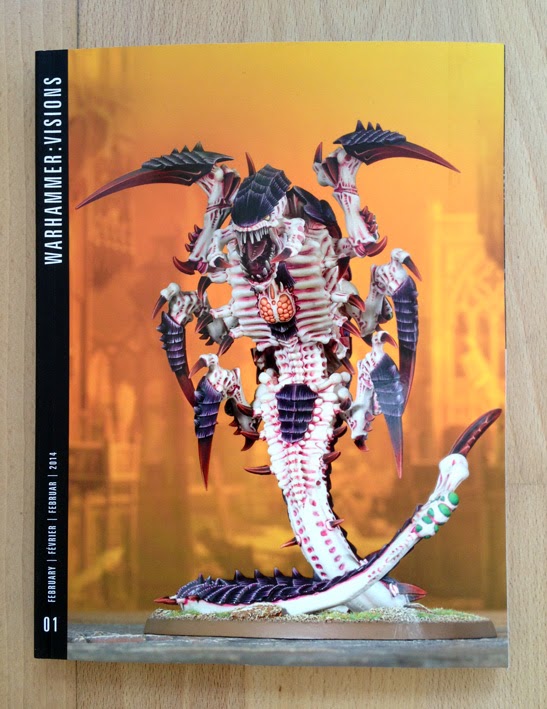 Garfy: Now over to the other new magazine.


Warhammer Visions is a smaller size, 21.5cm (h) x 16.5cm (w), a bit larger than A5. It has 232 pages, and the cover price is £7.50/9 Euro. The format was being advertised as having "a stunning new extended pictorial style" and "more fantastic photographs of Citadel miniatures than ever before". Warhammer Visions is an art book and because of it's nature the text is limited to a minimum, and comes as just short captions in three languages (English, German and French). 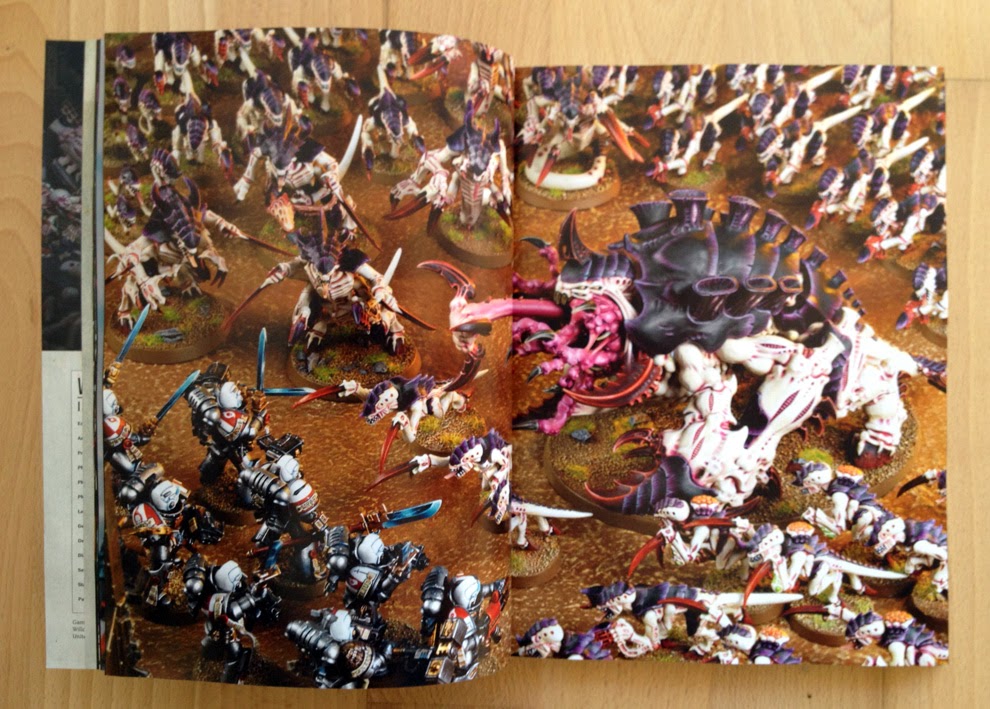 This compact sized monthly magazine is brought to you by the creators of White Dwarf. It isn't White Dwarf, it's a completely separate entity. It's small size visual compendium with an expensive price tag. A lot of people are comparing and judging this to previous editions of White Dwarf which is unfair because it's something completely new that Games Workshop has never done before. The closest thing you can compare this to is the old Golden Demon winner booklets that use to be given away with old issues of White Dwarf and people loved those and have been crying out for those for years. 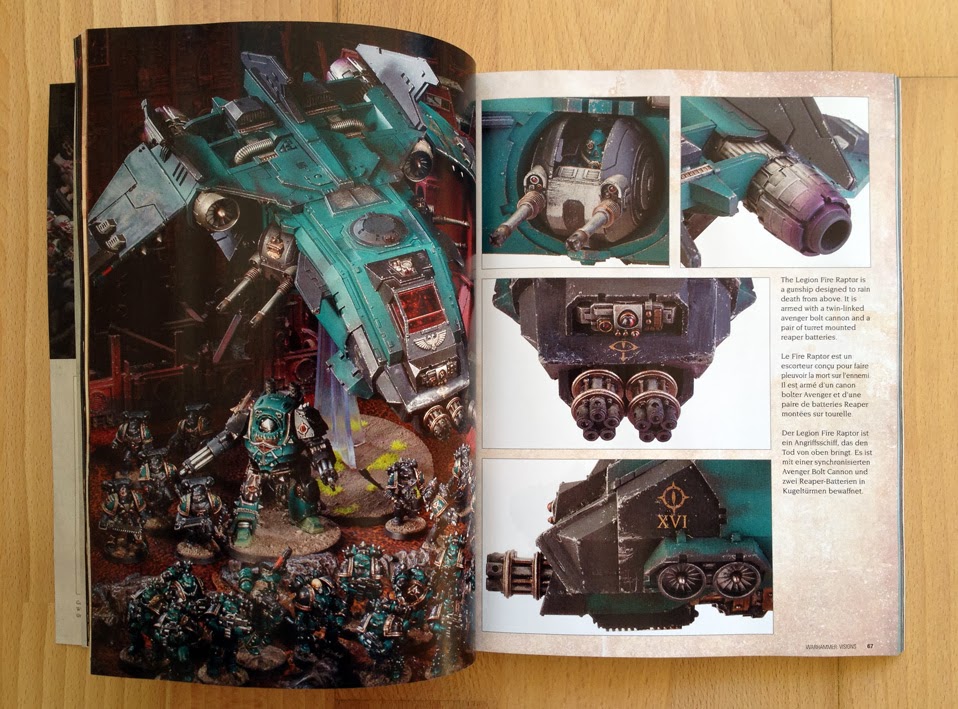 Visions starts with pictures of the new releases - in fact, last month's Tyranid and Hobbit releases, as the magazine will be a recapitulation of the month that passed. We've already seen a lot of these pictures from last month's White Dwarf which is unfortunate for a brand new magazine (unless you really love the Hobbit and Tyranids then it's double bonus for you). There is a fold out section which gives you a large battle scene featuring Tyranids. Army of the Month looks great but it's missing the dialogue from the featured painter explaining their ideas and thought processes. 50 pages of parade ground focusses on Golden Demon winners and this is the best bit of Warhammer Visions because it doesn't need text, it's a shame they use to give these Golden Demon Winner books away for free with White Dwarf and they don't anymore.

The battle report is pictorial with minimal amounts of text. We were all shocked when new White Dwarf took away our turn by turn battle maps, well they've taken our words now. How long before they remove the pictures as well ;-). Kit bash is nice, it works in the new format, nice close ups and a few notes. Hive Fleets is just more Tyranid pictures, I felt we had enough Tyranid pictures earlier on in the book. 11 pages of paint splatter on Tyranids. These are just paint recipes, useful if you're just starting out but this Visions isn't for newbies, it's an artbook showcasing world class painting, the tutorials need to reflect that. Store lists are at the back and feature more words then the rest of the magazine. 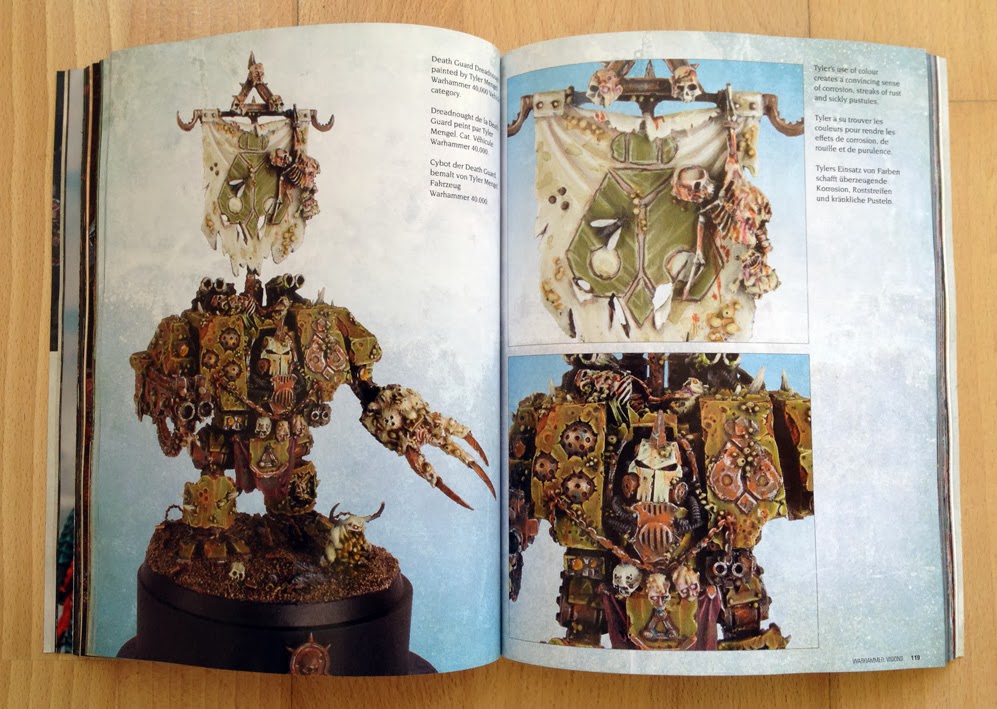 Stahly - For my taste, White Dwarf weekly is too one-dimensional with the only focus on the releases of the week. Even for the low price, the page count is woefully short, especially considering a full month of WD weekly will cost you 9,60 pounds/12,80 Euro for 128 pages, while the monthly WD had on average 148 pages for 5,50 pounds/8,00 Euro before. In my opinion, they need to increase the page by 8 or 12 pages and bring back more variety in terms of what armies and game systems are featured. I wouldn't mind seeing them bringing back features like Army of the Month or Kitbash from Visions. 32 pages are so short, chances are you'll probably flick through this issue one time and put it on your shelf left to gather dust for all eternity. 4/10

When it comes to Warhammer Visions, I was very disappointed. I predict the format will tank in less than a year, either to disappear completely or to be overhauled majorly. I just don't see a target group for what is essentially a model p*rn magazine. Or a picture book for adults. Don't get me wrong. Hobby showcases are great, I love looking at neatly painted and well photographed miniatures - as a part of a magazine which has a lot of other stuff thrown into the mix. But a magazine merely consisting of pictures? Even though the photography is high-class, there are millions of beautifully painted models all over the WWW. Most people just won't feel the need to shell out extra money when they can find all those inspiration online for free. Especially considering that despite the high page count, Warhammer Visions is lacking variety - most of the issue are made up of the same 'Eavy Metal and studio models on the same Realm of Battle boards with the same Citadel terrain kits over and over again. 2/10

Garfy - I really like White Dwarf weekly. I love the idea of getting a weekly hobby fix. I like the streamlined feel to it. I like the content. There is paint splatter, a gaming article, rules, design notes and no store listings. This is like old white dwarf from the early 1990's but with better photography but no battle report. 7/10 (would have been 9/10 if it had included a battle report and army of the month and 10/10 if had included a free gift like a model on the front).

As for Warhammer Visions, my excitement turned to disappointment really quickly. Whilst some of the features work, such as Kit Bash and Parade Ground. All the other features are seriously lacking context. By that I mean explanatory text. Imagine you're brand new to the hobby and you pick up Visions. It wouldn't answer any of your questions. You have to have prior knowledge to understand Visions and if you already have that knowledge then you kinda don't need Visions. I've already seen a lot of the Golden Demon winners online and I've already seen the Tyranid models in the Codex. The paint splatter pictures with no advice or guidance isn't up to the quality of the painting featured in the magazine. This magazine is a solution to a problem that never existed. Gutted.  3/10.

Stahly: Garfy raises a good point. From my professional point of view as someone who works in the media industry, I think Visions won't work at newsagents. The small size will go under, and you need a flashy cover with big headlines to grab the attention between all the magazines at the newsagents' shelves. And for someone who has never heard of the hobby and just picked up this magazine when browsing the shelves because he liked the cool alien on the cover, there is no explanation what this all is about. On the other hand, the more "coverage" White Dwarf will be only available at GW shops and indepandant retailers (currently with no subscription option), while it should really be the other way round. I think GW felt clever because they thought that with a weekly publication they would get people into their stores every week, picking up their copy and hopefully buying something else. But it isn't said that people who bought one magazine a month will suddenly buy 5 magazines a month now. And if you don't have a shop carrying White Dwarf around, you will miss out completely or need to buy a poorly made ebook conversion online. Exactly for this reason I predict a a large increase in waste circulation and shrinking print runs as the magazines will cannibalise themselves. Not a great prospect, as I imagine there is a lot of pressure on the White Dwarf team after the horrible last year results that became public a little while ago.

Garfy: Visions also creates a bigger problem for White Dwarf that no one has picked up on... if they can produce a 232 page full colour book for just over £7 then why are they charging £20 for the armies on parade book which is recycled articles and less pages?