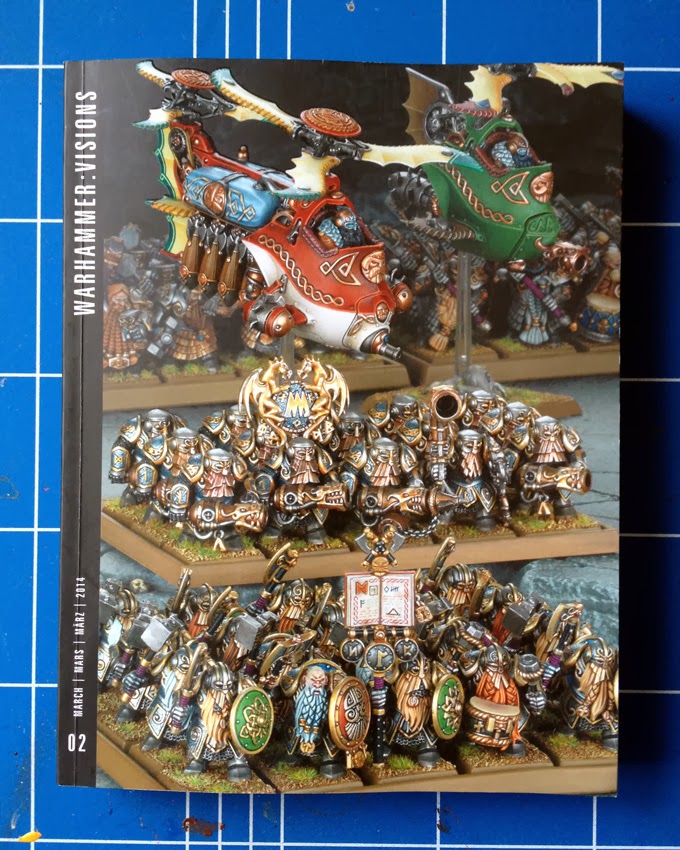 March's issue of Warhammer: Visions is the second release in this new monthly publication from the creators of White Dwarf. Priced at £7.50 it costs a little more than your average monthly magazine, which is over £5 these days. Unlike your average Golf or Photography magazine you buy at a newsagent, Warhammer: Visions doesn't include any third party adverts. This lack of additional revenue would explain the increased cost.

A large fold out section showcasing the latest Dwarf releases

With 228 pages of uninterrupted hobby, Visions is a photo book measuring 165mm wide and 215mm high (slightly larger then A5). There are no articles to read. This issue features the Dwarf new releases, Forge World releases, Imperial Guard and Grey Knight Army of the month, Golden Demon Parade Ground, pictures from the White Dwarf weekly Battle Report, Tau Battlesuit kit bash, Blachitsu, Dark Eldar Kabals, more Dwarf pictures that aren't part of the new release, paint splatter and the usual store finder at the back. 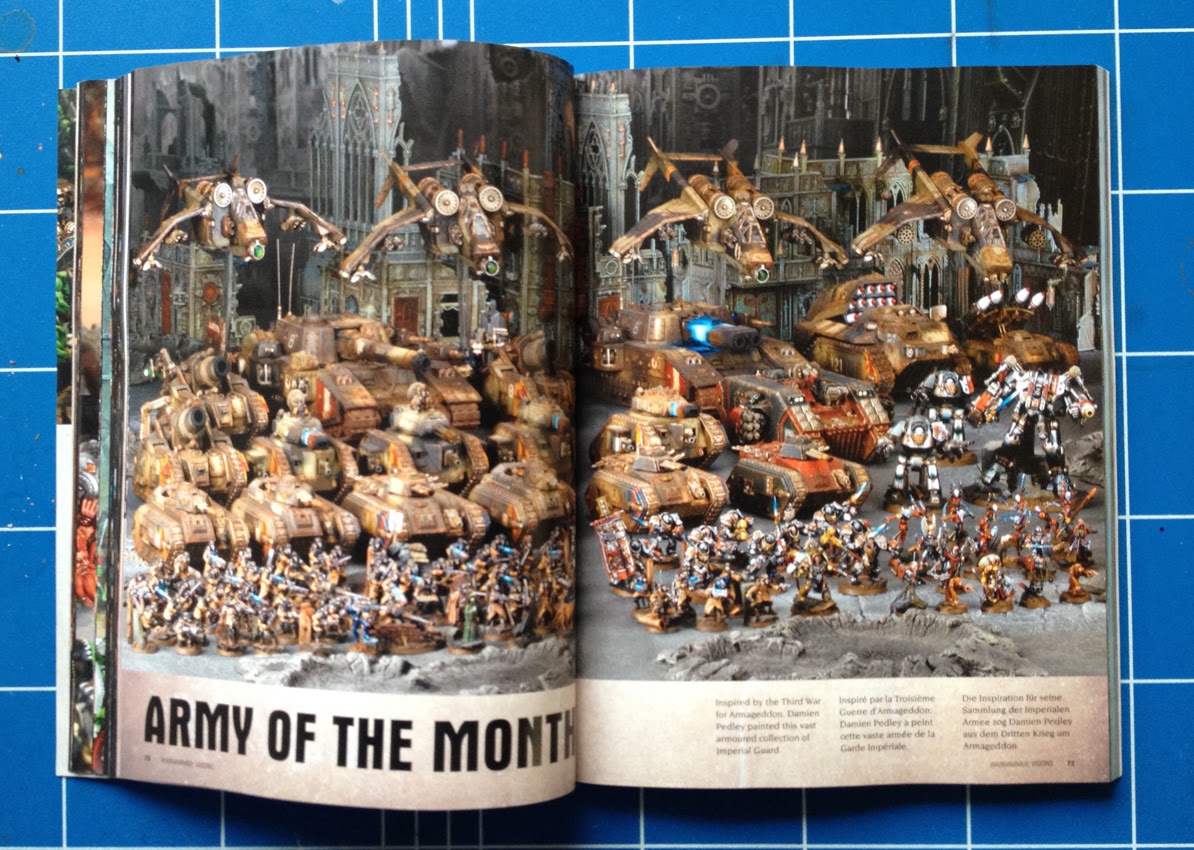 The Good
Hobbyists love to reminisce about scouring their old issues of White Dwarf for inspiration. The problem with that is most of the content is out of date. None of the rules articles/battle reports are viable because the game editions have moved on. Warhammer: Visions doesn't include any of the information. It's akin to a ready made scrapbook in that regard. I'm quite excited by the prospect of having a row of these on my shelf in my painting room where I can, grab one and have a quick flick at the Golden Demon entries or kit bash to inspire me. I can't see them going out of date. There is a good mix of ranges from Warhammer 40,000 and Warhammer Fantasy. 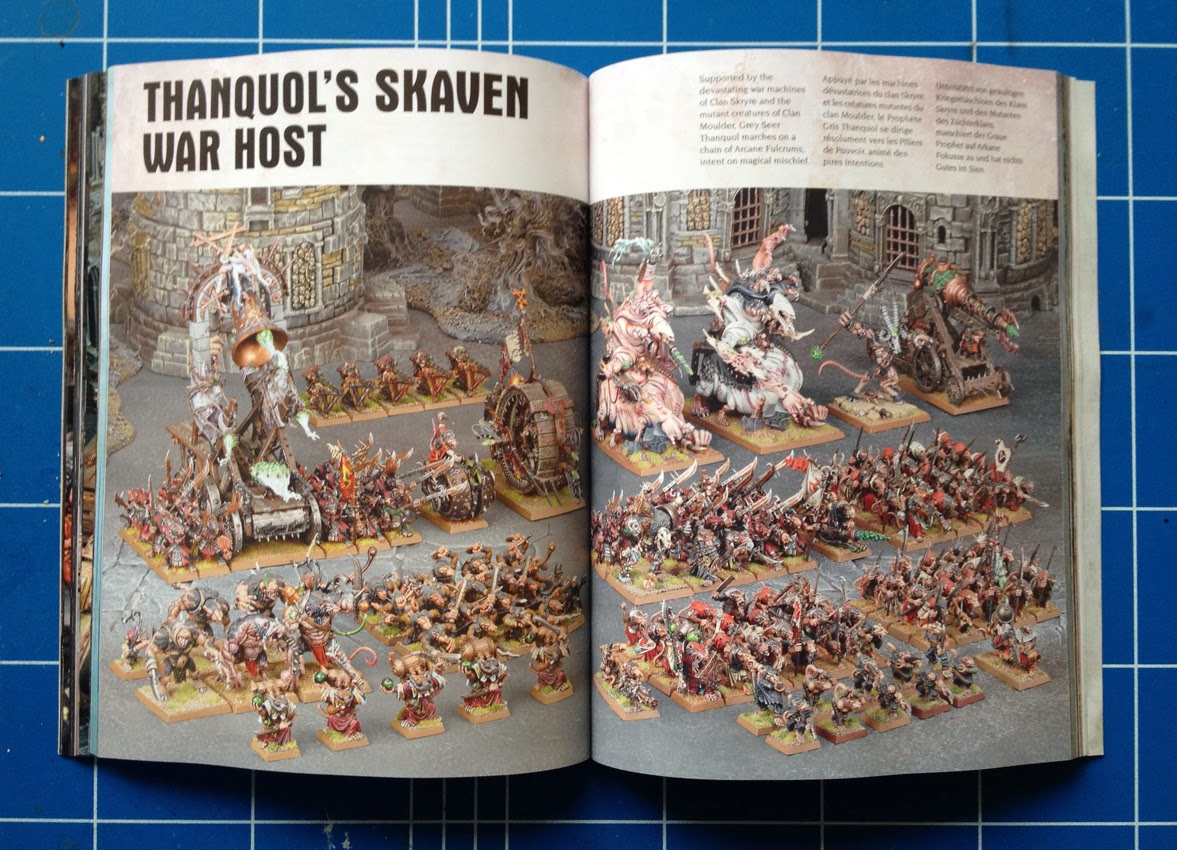 The Bad
If you already buy White Dwarf Weekly, you have already enjoyed the Dwarf new releases and pictures from the Battle Report and the paint splatter articles. The lack of articles and explanatory text will leave new comers to the hobby who buy this in their newsagents completely baffled to what this is all about. Stop and think for a moment how you would feel if you bought Warhammer: Visions with no prior knowledge of what the hobby is about. You might think the models are toys which are prepainted like heroclix or skylanders. You would have no idea it's part of a war-game.

No Hobbit content is a real shame. The lack of Hobbit support gives the impression it's a specialist game. 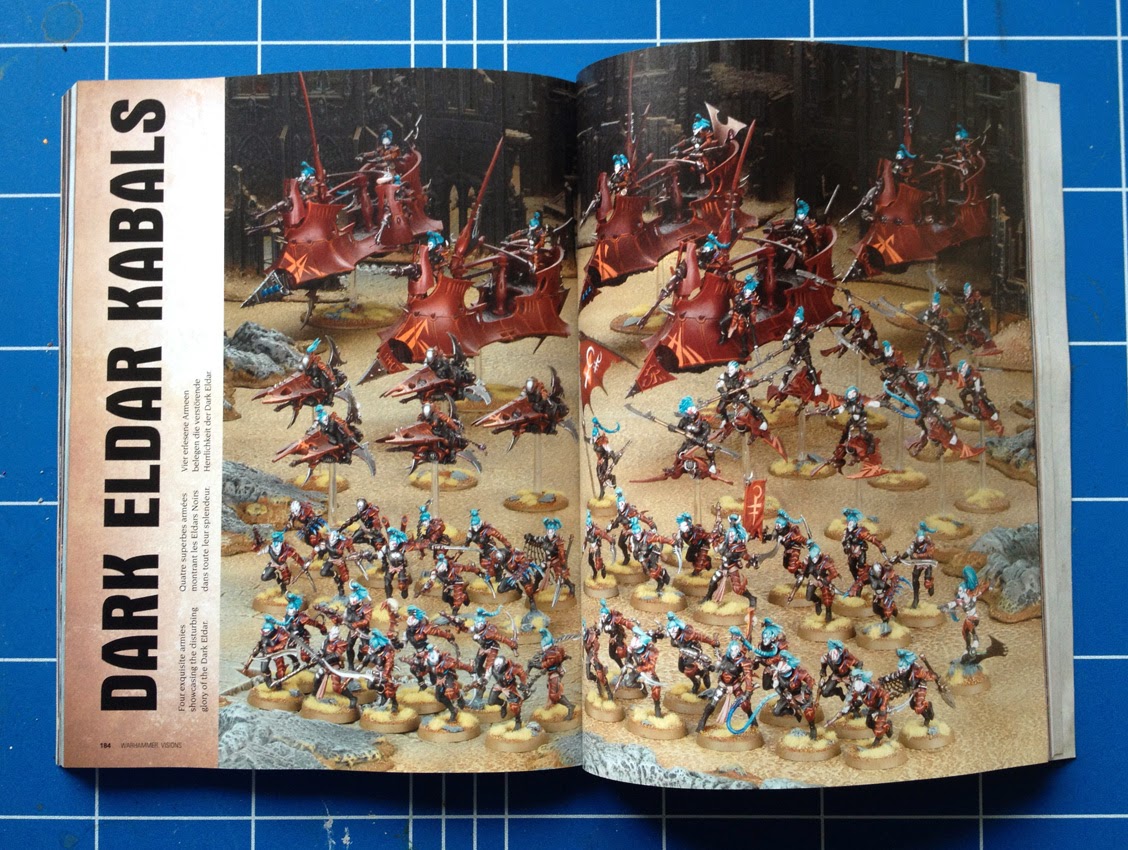 The Dark Eldar Kabal collection of photos was a pleasant surprise

The Conclusion
At £7.50 a month it's cheaper than buying a new codex every month for a collection of the latest army images. If you already buy White Dwarf Weekly or every codex army book then you might not find a need for this publication. If you're into painting inspiration and want a collection of art books on your shelf to browse and look back at over the years then this is great for you. Of course you don't have to buy it every month. You can just buy the issues that relate to your favourite races. if you collect Dwarves then this is a great addition to your Army Book.

Warhammer: Visions is available to buy from Games Workshop stores (and webstore), most newsagents and Independent Hobby retailers. There is also an interactive iPad addition available from Apple's iTunes store.