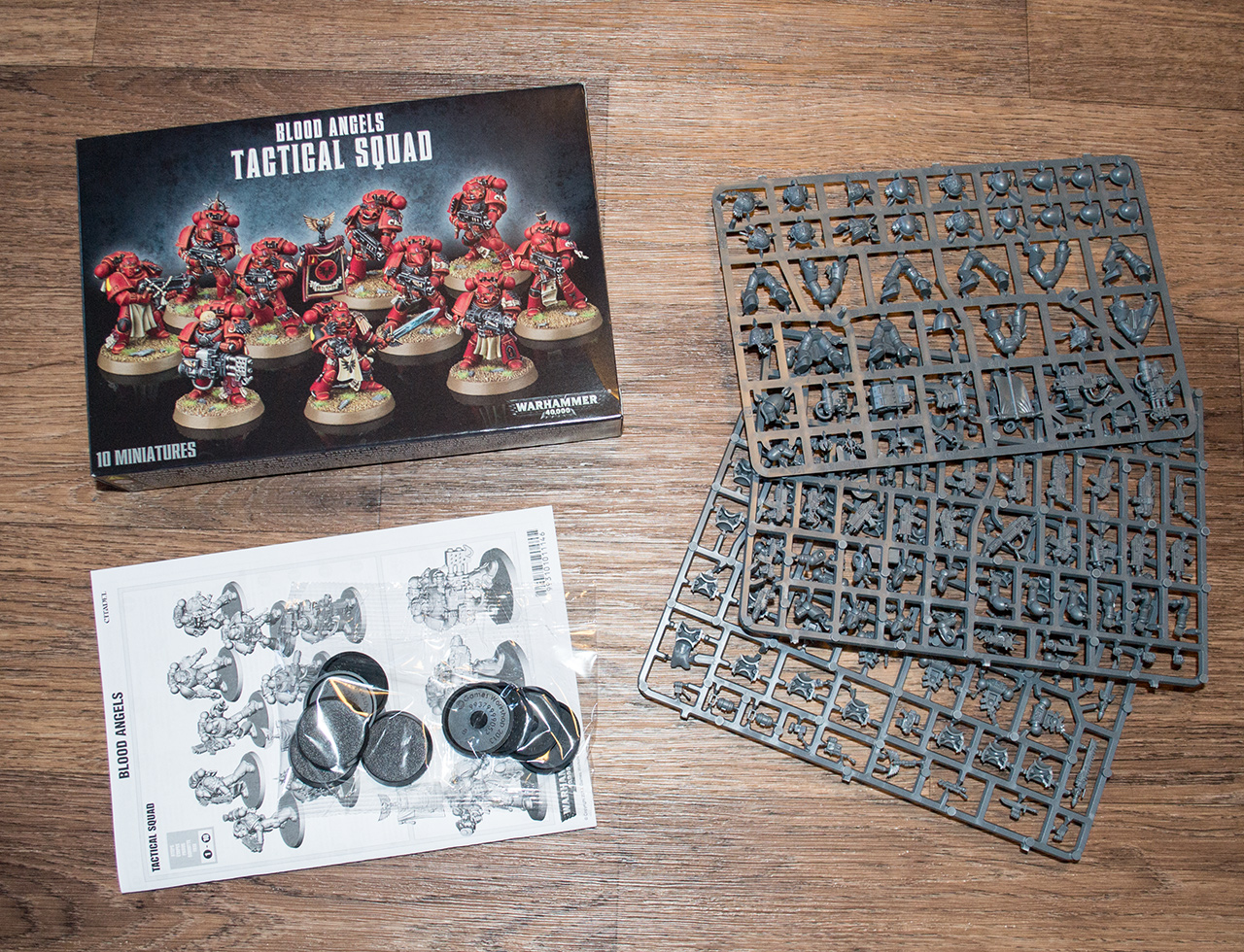 In this review I'm gonna unbox the new Blood Angels Tactical Squad kit. I'll take a close look at all the options, provide you with high-resolution sprue pictures and check out those new 32mm bases. Find out more after the jump.

When the first rumours about the new Blood Angel models came in about two weeks ago, many people were puzzled that Blood Angels were supposed to get a new Tactical Squad. The generic Tactical Squad kit has already been updated with the last Space Marine release wave, and one of the Blood Angels' thing had been Assault Squads for quite a while.

The solution is that with the new codex, Assault Squads are no longer a troop choice, but a fast attack choice like in every other marine codex. Coincidentally, GW turns up with a shiny new kit that suddenly all the people need, who filled their troop choices with Assault Squads, as it was encouraged by the last edition of the codex. Which really leaves a bitter aftertaste for me, as I'm currently painting a lovingly converted Assault Squad.

The box comes with three regular sized plastic sprues, a manual, and 10 of the new 32 mm round bases. There are no transfers, which is a shame, because while the chapter symbol is molded on the left shoulder pads, the company insignia on the left pads is not. The box is priced at 26 pounds/34 Euro/43 dollar (1 pound/3 dollar more than the generic Tactical Squad, but strangely 1 Euro cheaper).

This sprue contains torsos, heads, backpacks, swords and other bits. 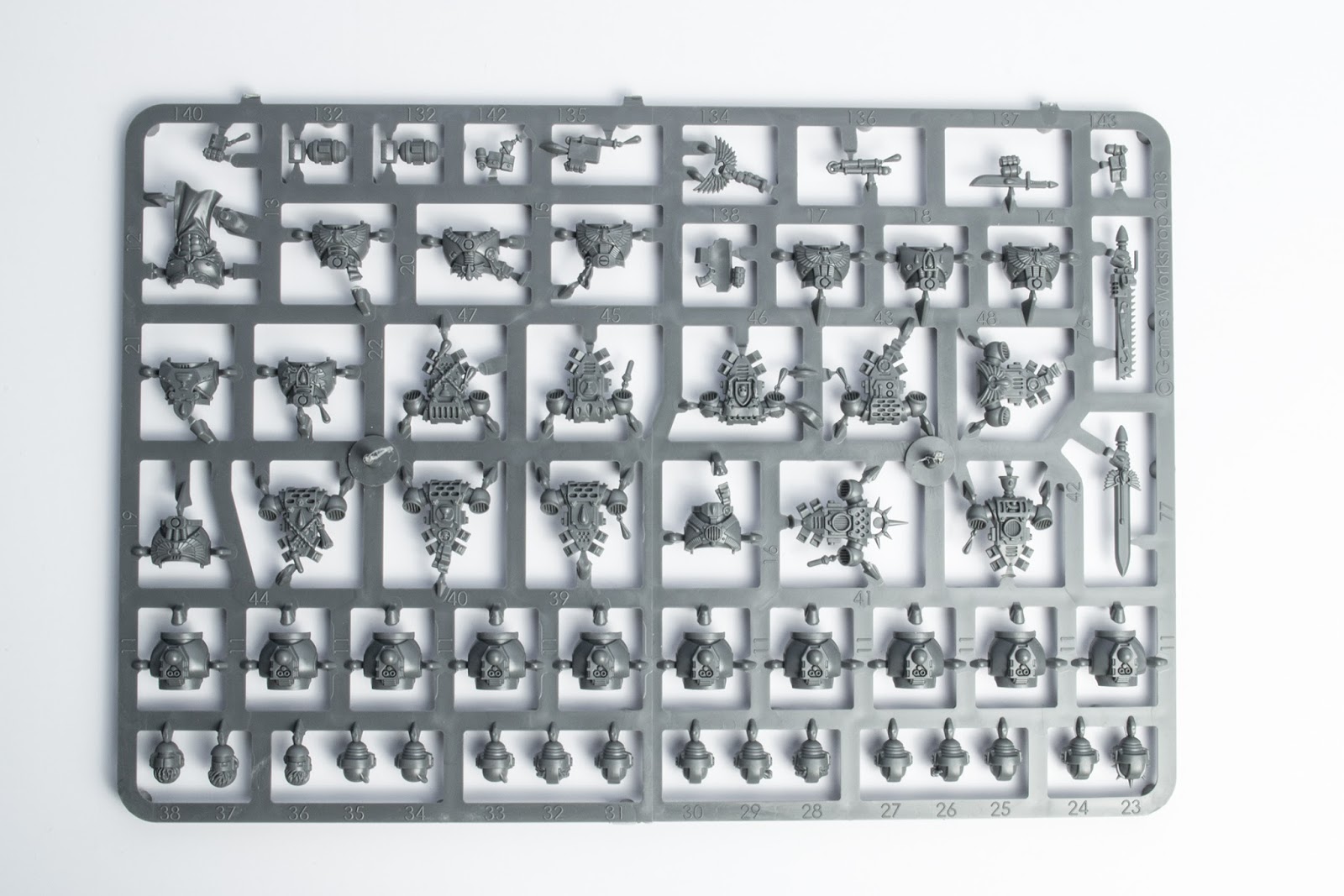 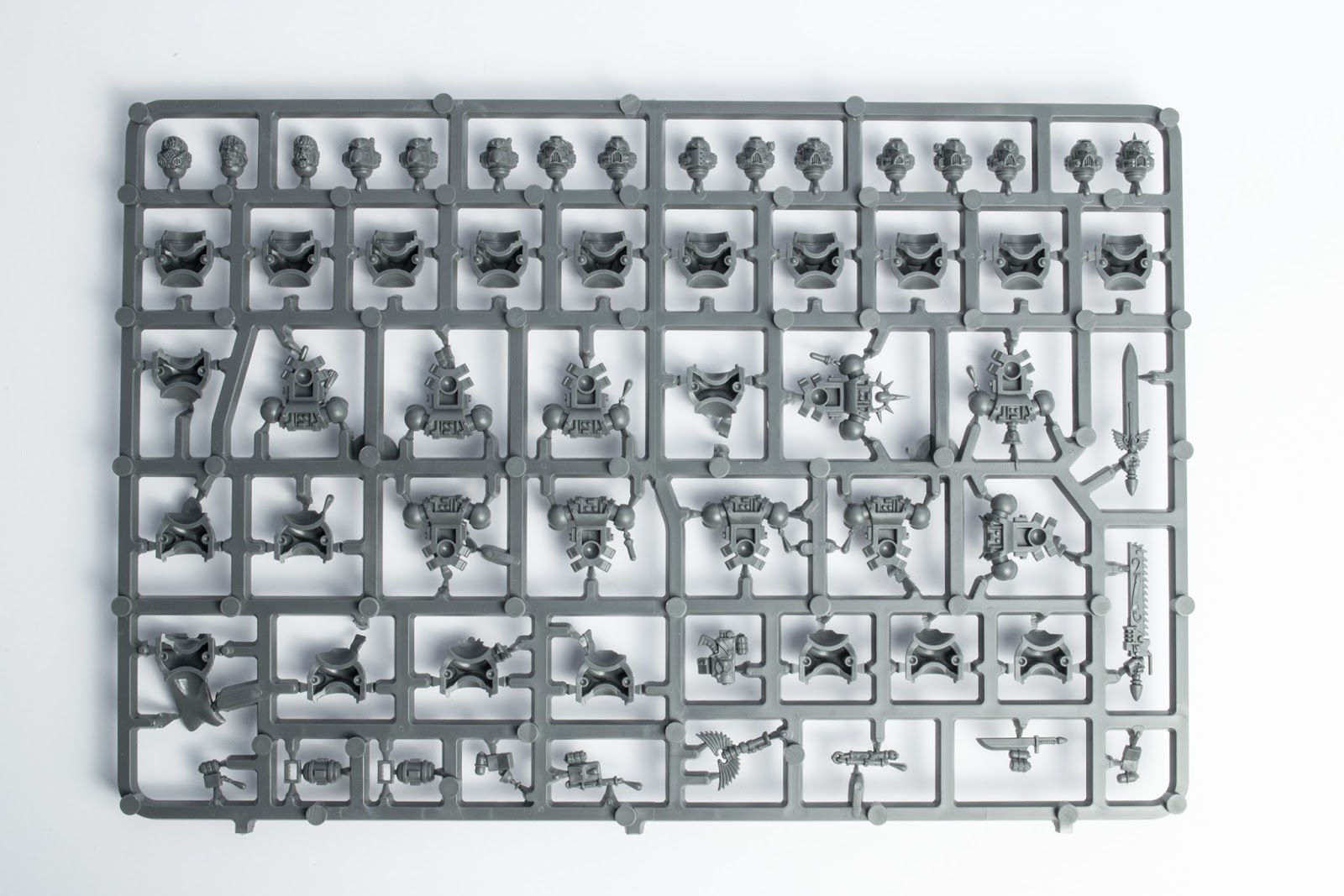 Here we have weapons, arms and some other random bits. 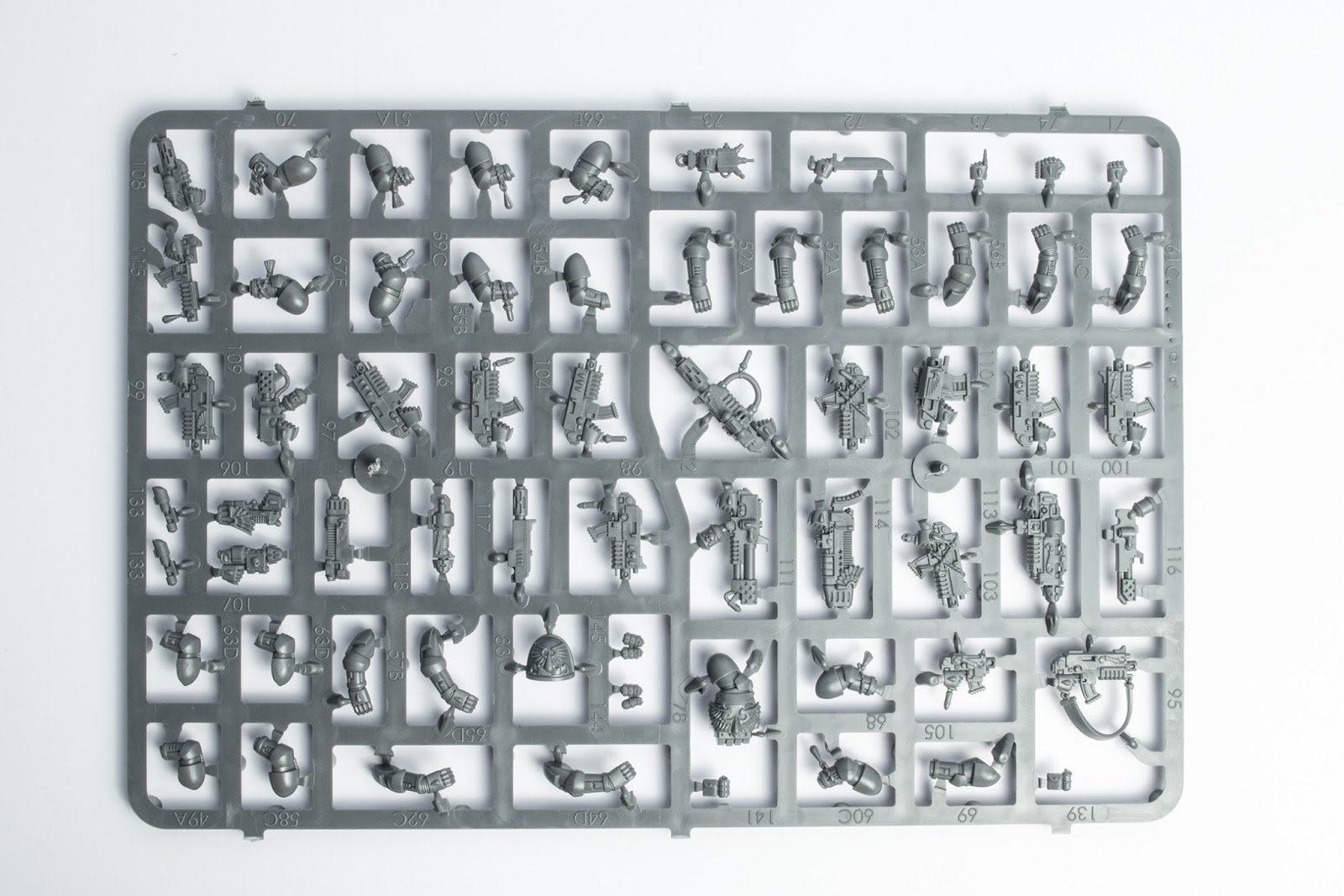 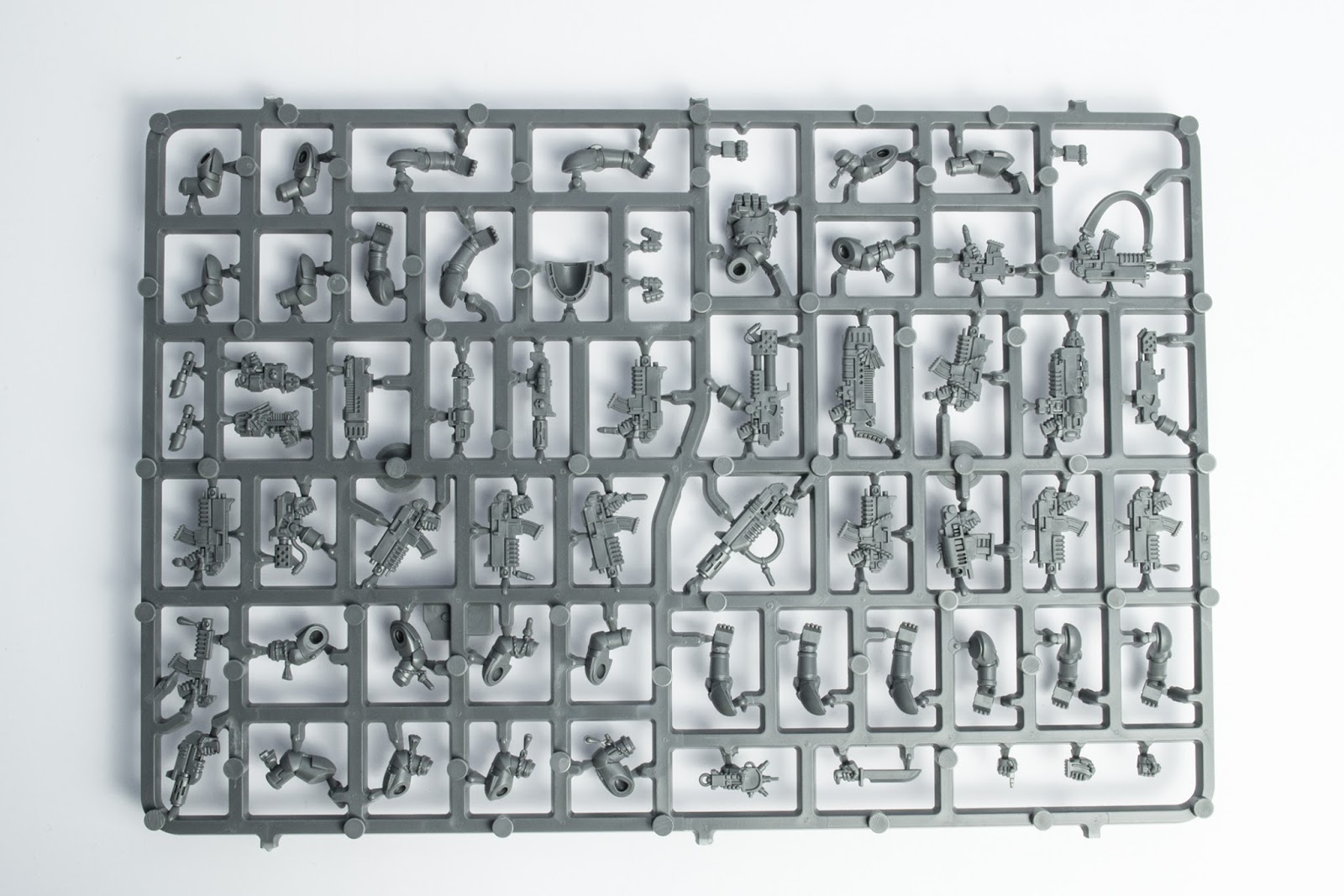 This sprue has all the legs, shoulder pads, heavy weapons and banners. 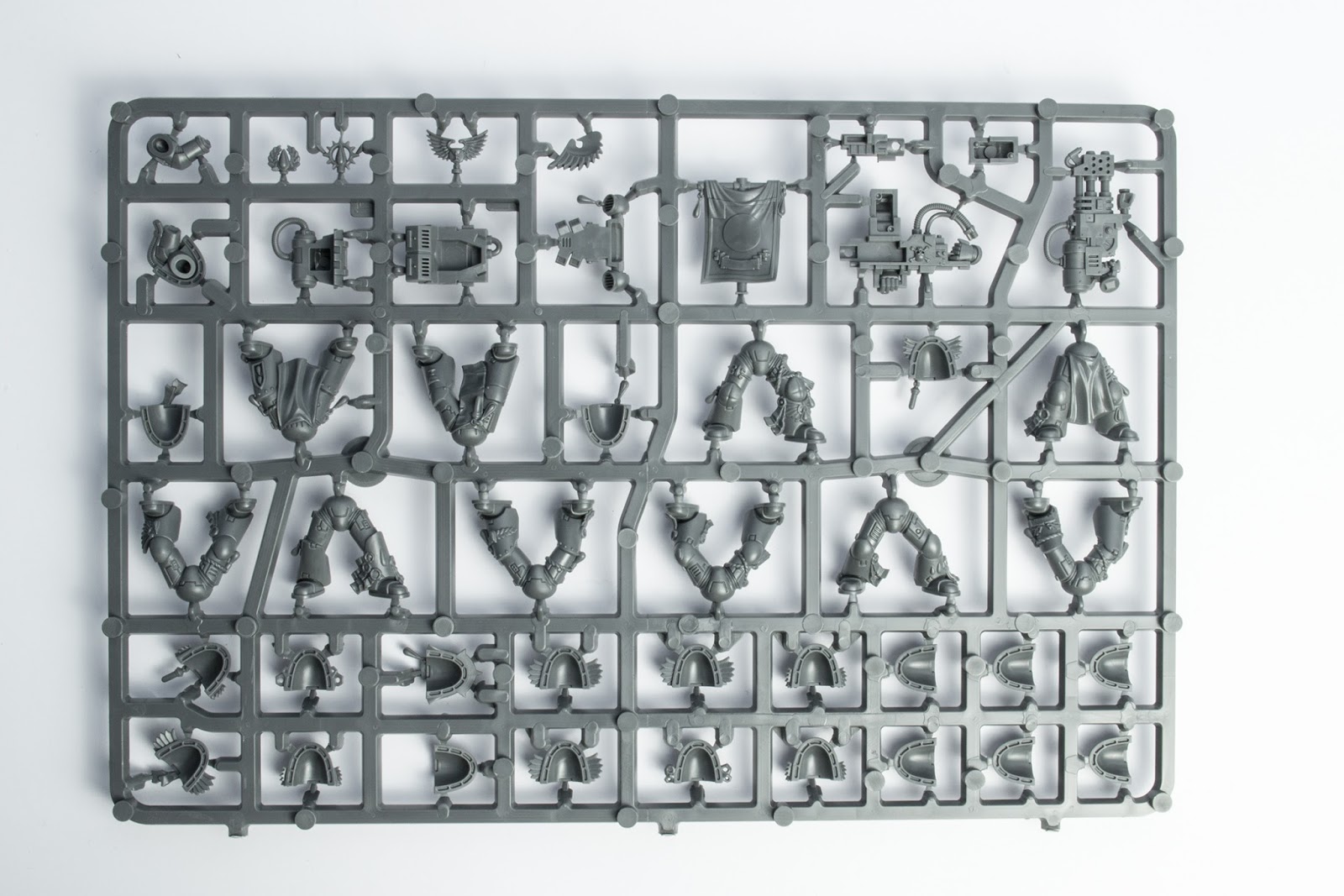 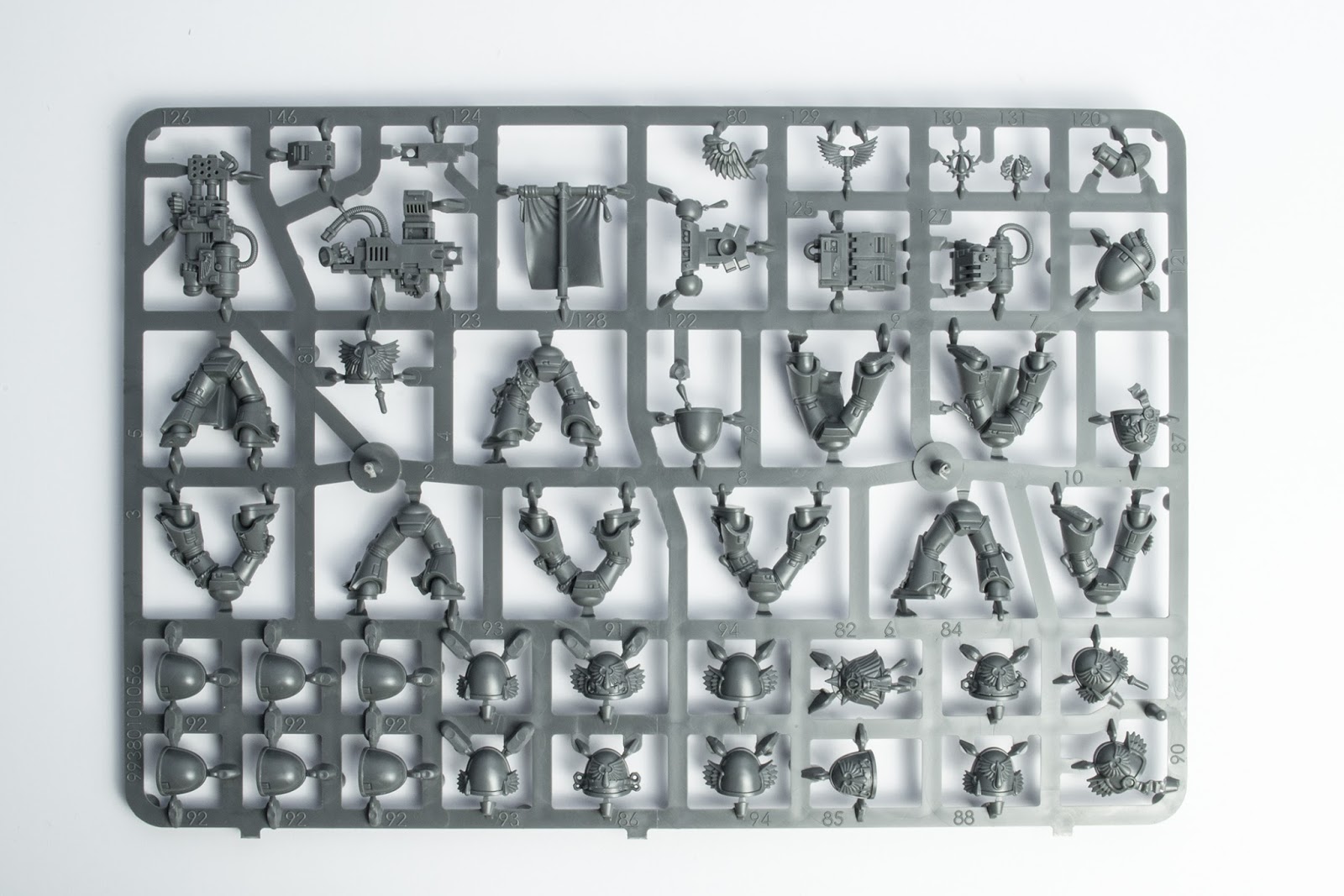 There are 22 shoulder pads in total. 10 with the chapter symbol, 1 with angelic heraldry, 7 plain ones, and 4 plain ones with little wings. There is also a curved chapter symbol bit that is meant to be glued on a plain shoulder pad, and the left arm for the heavy weapon comes with a plain, molded on shoulder pad.

There are 16 heads in total. 3 bare heads, that are slightly different from the other BA kits as one has a gas mask, and two have visible vampire fangs. There is also 1 Mk3 head, 1 Mk4 head (with the strange "dog's snout", Forge World's Mk4 helmets look so much better IMO), 3 Mk6 heads and 9 Mk7/8 heads.

When it comes to weapons, there are 10 bolter, 1 stormbolter, flamer, melter, plasma gun and grav gun each, also a modular combi weapon that allows you to build either 1 combi-flamer, -melter, -plasma or -grav. However, there are only 10 arm pairs for two-handed weapons included. There are also parts to arm a single marine with either a heavy bolter or heavy flamer (no, you can't build both as both weapons share the same arms and backpack). There is 1 bolt pistol, plasma pistol, grav pistol, hand flamer, infernus pistol each for left arms, and a power fist, a chainsword and a power sword for right arms. There are 2 additional left arms meant for melee weapons, and 3 right ones. There are also 5 left hands, with an auspex, a combat knife, a spare magazine, a grenade and with a pointy finger, that you can glue to a spare left arm.

As with the regular tactical squad kit, all weapons come with hands molded on, and are meant to be glued to the arms at the wrist.

People have been concerned since Deathstorm introduced the new 32 mm bases for marine infantry. However, there is no need to rebase your collections, as the rule book says you should use the bases that were provided with the models, and if your older models came with 25 mm bases, it's fine. Personally I have a hard time getting used to marines on 32 mm bases and will stick to 25 mm bases. However, 32 mm bases are here to stay, and in this week's White Dwarf, Necrons on 32 mm bases have been sighted as well. 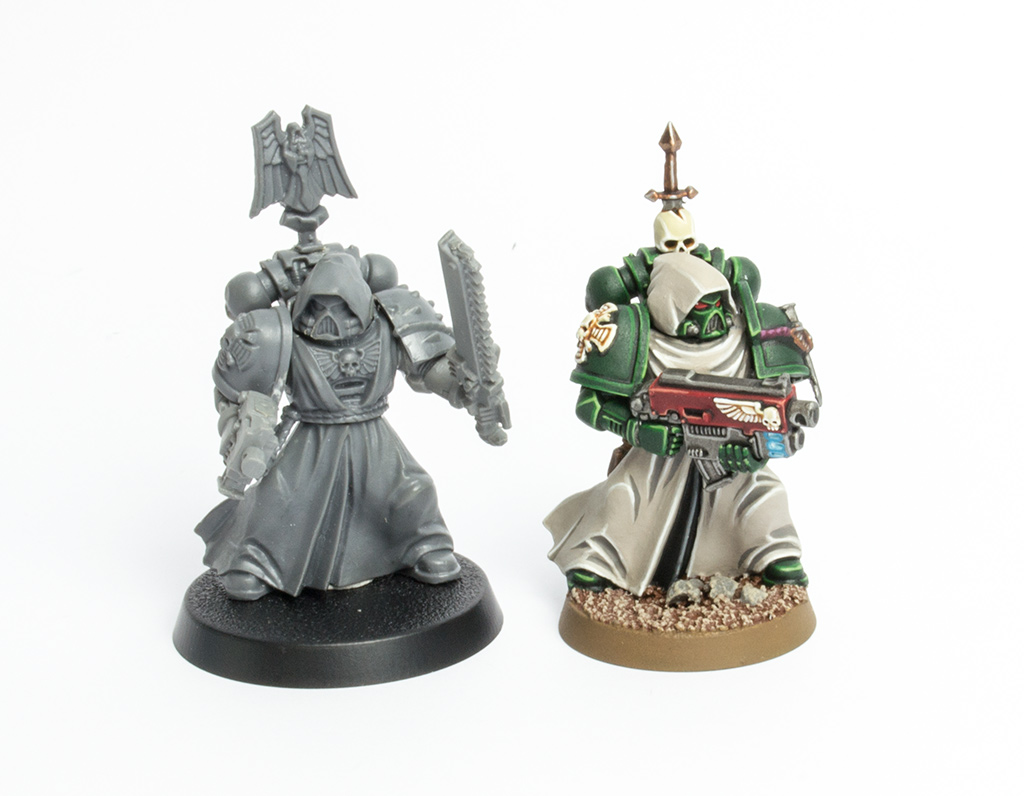 The Blood Angels Tactical Squad is a sweet kit that comes with all the options from the regular Tactical Squad box and trades the rocket launcher for a heavy bolter and the new heavy flamer option. It shares many similar parts with the regular Tactical Squad and the Death Company and Sanguinary Guard boxes though. With GW's digital sculpting process in mind, it feels a little bit like copy and paste design. The change to 32 mm bases is annoying, even if you don't plan to rebase your collection, as you have to find some spare 25 mm bases. A real bummer is the lack of transfers.

All in all, it's a kit with decent value, especially with an additional discount as you can find at Wayland Games or other websites. You can mix the parts with other regular marine kits like devastators or assault marines, the artificer armour bits and the banner also makes a great basis for a captain.