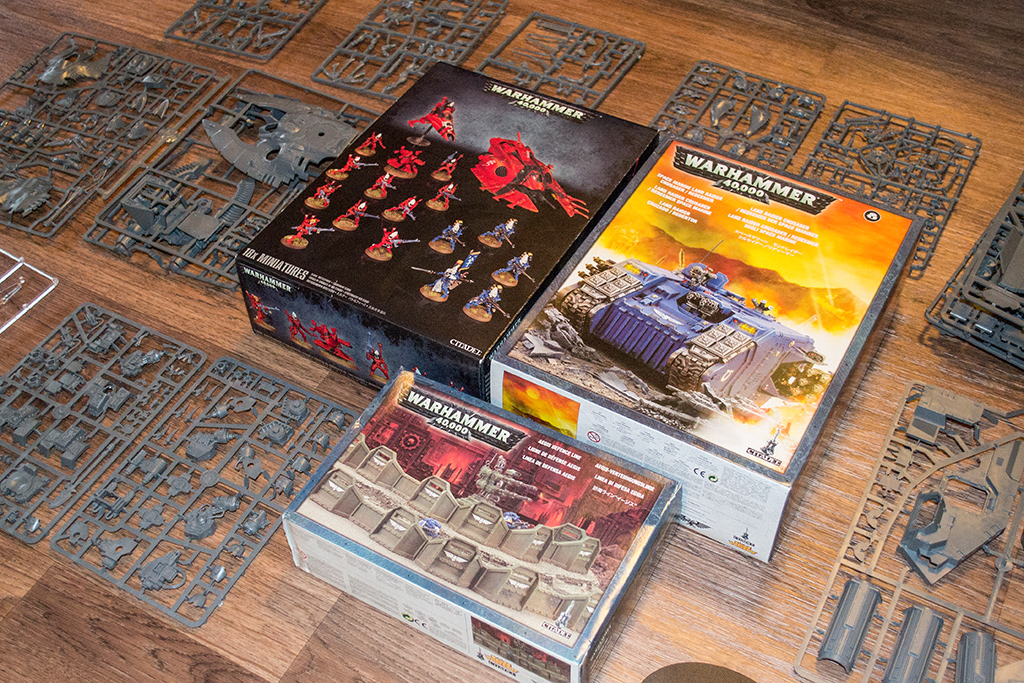 Hey guys, welcome to my personal review of the productive hobby year that was 2014. Our hobby resolutions and recap posts have become a yearly tradition here on Tale of Painters. Please feel invited to check out all the models I've painted last year, and whether I managed to fulfill last year's resolutions or not, after the jump.

In my hobby resolutions for 2014 I said that I wanted to paint a Stormtalon, more Sternguard and a character model for my Ultramarines. I managed to do all of that (when you sub the character for a Thunderfire Cannon and Techmarine). I vowed to paint a couple of Eldar models in a new craftworld Iybraesil paint scheme, which I did. I also wanted to paint more Dark Eldar models, and while I painted the Incubi and Venom, I wasn't able to dabble into painting Coven units. Well, maybe this year.

Finally I had thought of painting some Vampire Counts and Dark Elves models. However, I can't see myself getting into Fantasy in the near future, so I sold all my Dark Elves and might do the same with my Vampire Counts. Let's see what the end of the End Times series and 9th Edition brings, but at the moment I don't feel inspired to paint Fantasy models at all.

So what did I paint?

My main project in 2014 were Eldar of craftworld Iybraesil. As I already have a rather large Saim-Hann army, I mainly focused on models I didn't own yet. The new paint scheme also allowed me to introduce more refined painting techniques, such as the airbrushed highlights on the vehicles. I also worked for the first time with Forge World models, such as a Hornet, a type 2 Wave Serpent and some Shadow Spectres (which were the most challenging models to assemble I've ever had). Looking back, I was also particularly fond of my female Farseer conversion. 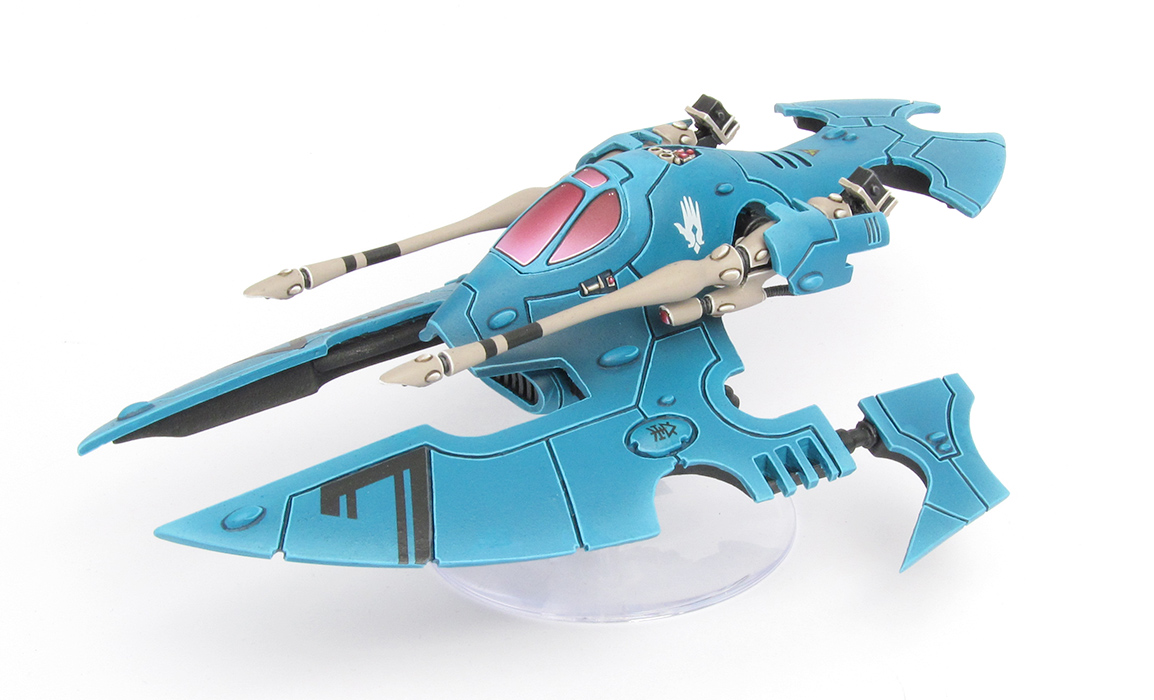 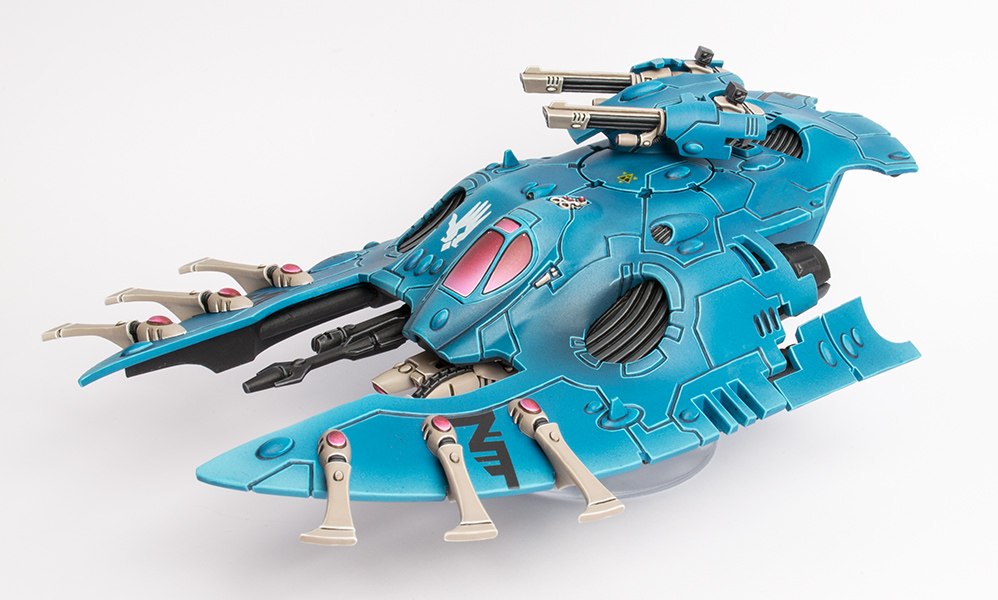 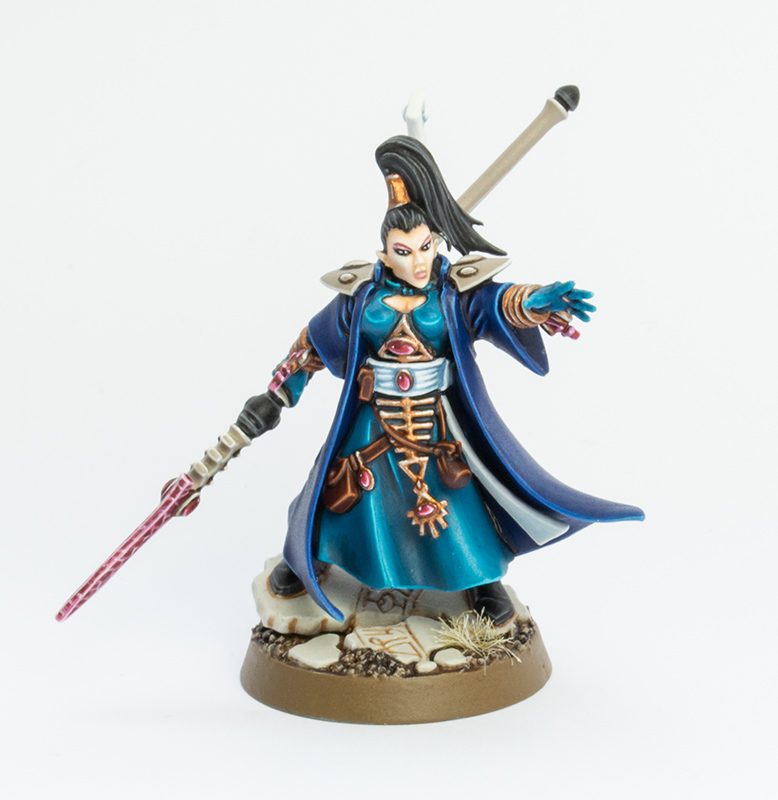 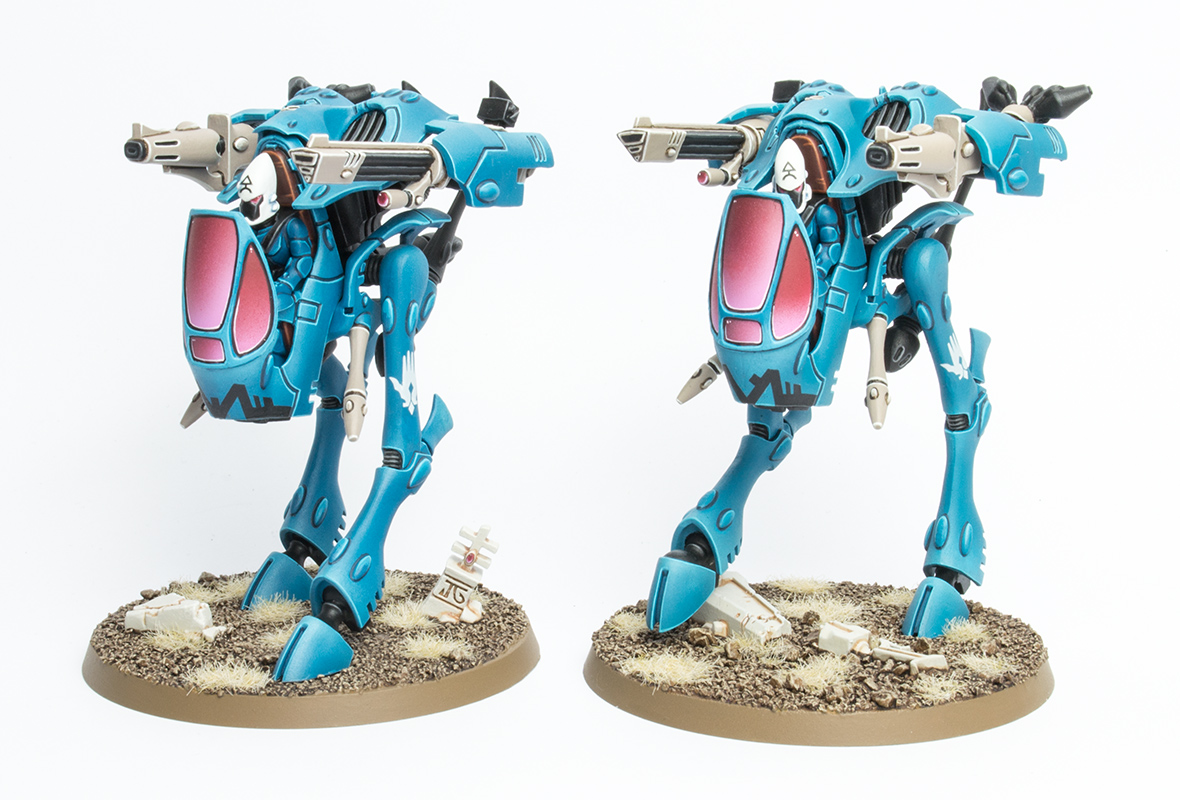 But there were also some additions to my Dark Eldar collection in the form of Incubi:

Last but not least, some love for power armour. There was a modified Stormtalon, and a Thunderfire Cannon. 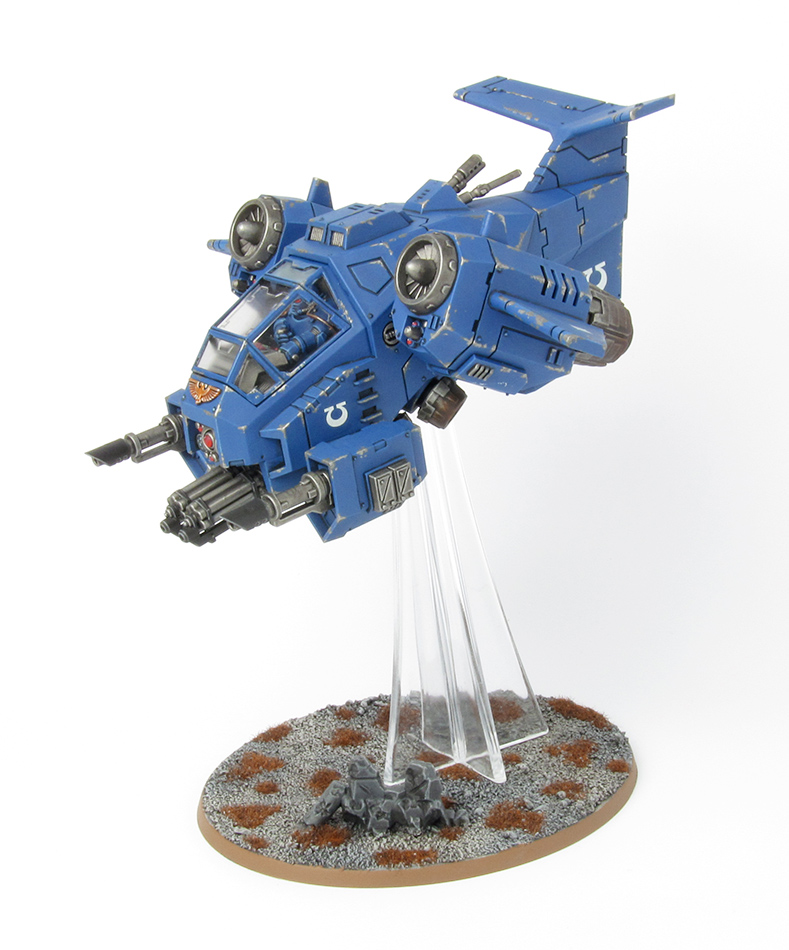 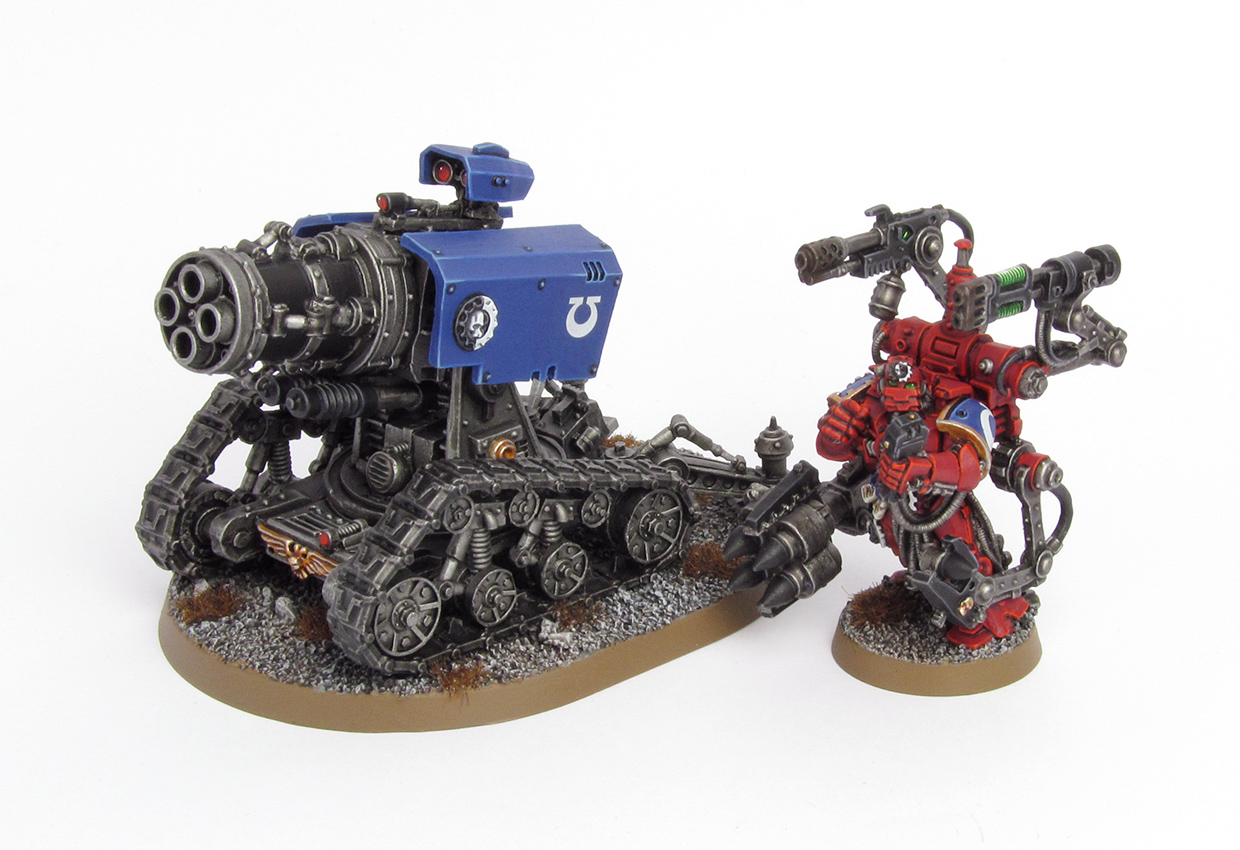 I also added four more models to my Sternguard Squad and improved the paint jobs of the other brethren. I also retouched some more older models, such as a Dreadnought, a Scout and a Tactical Squad. 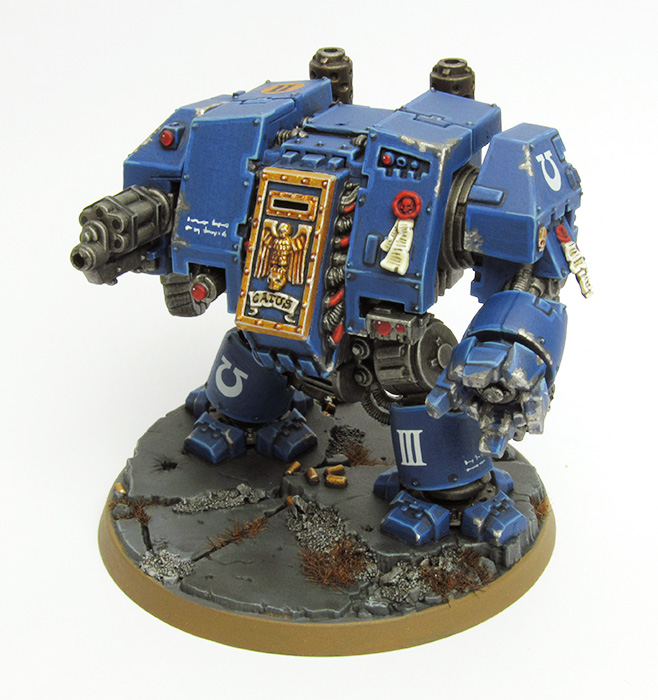 And just in time, I've managed to finish this Blood Angels Assault Squad:

If you want to check out more pictures of the models I painted last year, follow this link for all my showcase posts.

I feel I've been quite productive in 2015, so that's definately one of my highs. I really enjoyed meeting up with Garfy and ThirdEyeNuke in October and attending Warhammer Fest. It was awesome to see how many people recognised our Tale of Painters t-shirts, and that even some of the guys from the studio know our blog. I also enjoyed the new release schedule as there is something new to discover every week. Hopefully we'll see more one-off releases like the Chaos Helbrute in 2015, closing some long-existing gaps in model ranges (Eldar Jetbikes and plastic Aspect Warriors, hint hint ;)

What I didn't like was 7th Edition of 40k, with its copy-and-paste rulebook, and the new books in general. The amount of publications that GW churns out, as well as the dataslate format of the recent codex books, has lead to a massive drop in quality artwork. Instead, lots of rushed pictures with flawed proportions or a very digital look. As a result, I haven't bought a single book this year. I also don't like the direction 40k is heading in. On the one hand, recent codex books have been removing options and replacing flavourful special rules with more generic ones. On the other hand, the game becomes bloated with so many formations and special detachments you can hardly keep track of.

Another major bummer for me was GW's recently introduced policy to no longer credit their staff and designers in their publications. With no more personal columns or designer notes, White Dwarf, and GW as a company, has become very faceless to me.

During 2015 I want to paint as many more Eldar vehicles as possible (I've still got a Crimson Hunter, another Wave Serpent, Hornet, and War Walker, plus a Fire Prism and a Wraithlord). I'd like to focus on vehicles before there will be more Eldar infantry. On the other hand I'd also like to get along with my Blood Angels (Death Company, Death Company Dreadnought and Tartaros pattern Terminators). And last but not least, I want to add another couple of models to my Ultramarines and Dark Eldar. It would also be nice to retouch more of my older Ultramarines paint jobs, just to get that out of the way.

In general, in 2015 I would like to stick to the kits I already own and work through my backpile before buying more. But who doesn't ;) Let's see what GW comes up with this year.

What are your hobby resolutions in 2015? Share them with us in the comments!