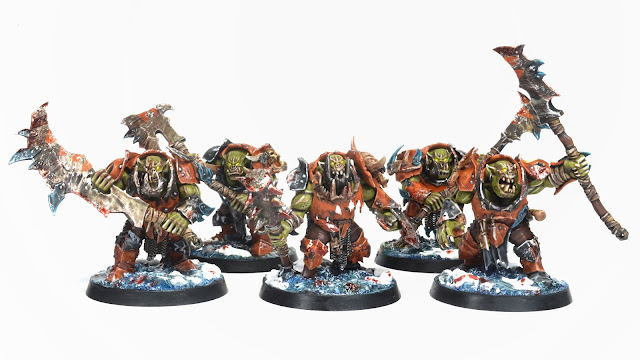 Hi everyone, I explained in my last blog post that the Warlords event at Warhammer World had sparked inspiration in me to start a new army, well here it is - Ironjawz! I've finished my first unit for the army, a unit of Brutes. I explain why I chose this army, the scheme and how I painted the armour and skin after the jump! 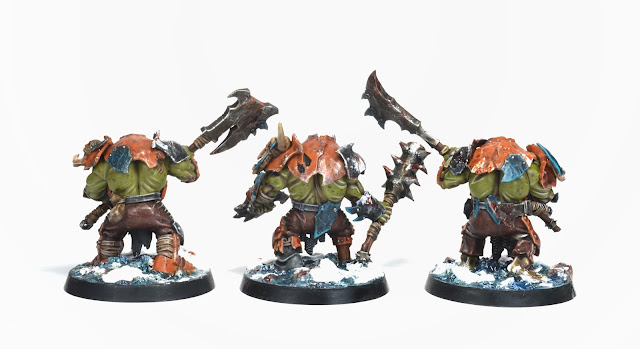 I actually played an army of Ironjawz in one of my games at Warlords, and they were great to play against. I loved the way they played and also seeing the models up close sparked an interest in wanting to build an army myself. On my return home, I bought the Start Collecting Ironjawz box and a box of Brutes, I decided to paint the Brutes first as I think they're my favourite models from the range. I love the level of detail and character in the sculpts.

The next step was picking a colour scheme. I wanted to paint an army that would really stand out on the battlefield, and I also wanted to base them in the same scheme as my Fyreslayers and Ogors - on rocky ice bases. I initially thought of painting the armour red but after a flick through the Ironjawz battletome for some inspiration the Nedek's Weirdladz warclan really caught my eye, I loved the brightness of the orange armour and thought this would contrast nicely with the blue of my bases whilst also being a really stand out colour.

It took me a while to finalise the scheme, testing it out with pure orange armour first and then I decided to paint some odd bits of armour black, which I'm really happy with and think it breaks up the armour nicely. The orange is painted Jokareo Orange, Troll Slayer Orange, Lugganath Orange, Reikland Fleshshade and a mix of Bloodletter and Lamenters Yellow glaze. I also edge highlight with Lugganath Orange, and then sponge on and paint on chips and scratches with Rhinox Hide highlighting with Lugganath Orange.

I decided to go for really bright green skin, again because I wanted the army to really stand out and look bright. The green is Elysian Green, shaded a mix of Druchii Violet and Lahmian Medium, and highlighted Ogryn Camo and Vallejo Ivory. I also glazed the knuckles, elbows and scars Carroburg Crimson, and also added a little of this around the face too.

When finishing the basing, I felt my ice base scheme needed something else to add a bit of interest, I decided to add snow and I did this using Pollyfiller and added a little bit of gloss, I feel that this breaks up the blue and also identifies the bases clearer as being ice bases, they're a little difficult to photograph as the 3D gloss I use for them makes them quite shiny. Overall, I'm really happy with the appearance of them, and will add snow to the bases of my Fyreslayers and Ogors when I get them back from the Warhammer World special exhibition next month.

The next unit for this army is a unit of 10 Ardboys which I'm currently making my way through now, I'm really enjoying painting them and having a little break away from current projects!