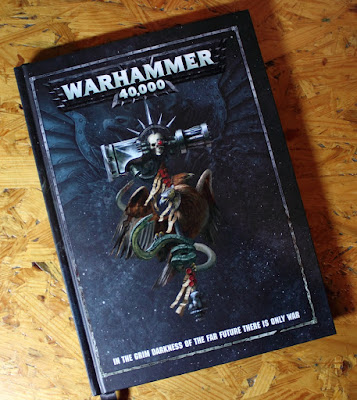 In this second instalment, I'll talk about the only thing from the box you actually need to play the game - the rule book.

As mentioned in the first article I expected the rulebook in this box to be of the 'travel version' kind: smaller format, softcover, small font. Instead, we get a full 280-page, hardback tome.

It is lavishly produced in full colour, featuring a ton of illustrations, many of them across two pages. The fold-out panoramic pictures are gone though. 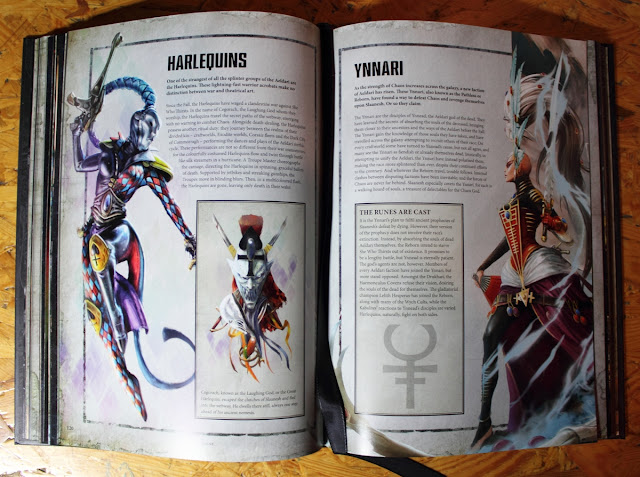 And yes, there is an Index in the back. Good.

On the first 180 pages of the book, we learn about the background: the Imperium, the alien races, Chaos, all of that. It's funny how for every new edition of the rules they come up with a new diagram to depict the inner workings of the Imperium and how the different organisations interlock.

We of course also learn about the big rift in reality; a ton of warp storms emerged, cutting communication within the Imperium, and all kinds of bad things happened. It's basically another Age of Strife. Things look really, really bad, as they always do in 40k and which of course is the very core of the setti- WOOPIDOO, here's Roboute Guilliman and his time is now! 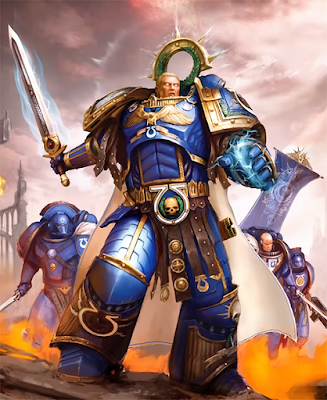 It's been hinted at since 2nd edition of course, but nobody thought they'd ever actually do it, but the Primarch of the Ultramarines has returned and in true deus ex machina fashion a pal of his had been working on making bigger and badder Marines for 10,000 years and just so happens to be finished now. It is made clear that many other chapters since have adapted the new technology (new technology! In 40k!) to make their own big-leg- or Primaris Marines. More on those later.

So everything's in shambles and Roboute Guilliman, after having saved a lot of people (I did have a hearty laugh at the thing with the Blood Angels), is now leading a crusade of Custodes, Sisters of Silence, Imperial Fists and a bunch of strike forces from other SM chapters to relief besieged worlds across the Imperium.

To be honest, I don't mind this. It's a unique twist about the 40k background.

Right, on to the rules. These are found once we got through all the background stuff. 8th edition shakes up the rules.

As we all are aware, ever since late summer 1998 40k's been built on the 3rd edition rules and since then they've done their dearest to make those actually work. And to be fair, they did get pretty far in this, mostly by adding things they'd kicked out at the switch from 2nd to 3rd edition. Ultimately though, the 3rd edition core rules just are not strong enough to carry now roughly 20 armies, each of them with a host of special rules and equipment.

8th edition is here now and once again changes things, mostly by trying to boil down the immense load of various things it has to carry on its shoulders.

A player's game turn now looks as such:
First and foremost - the Movement value is back! The renaissance of 2nd edition is upon us and everything will be fine again for us old people! Well, not quite. The main reason for this is so that vehicle movement can be dealt with in a simpler fashion.

One of the most apparent things about these rules is that there is no vehicles section at all. Vehicles now operate just as any other figure, using its movement value. 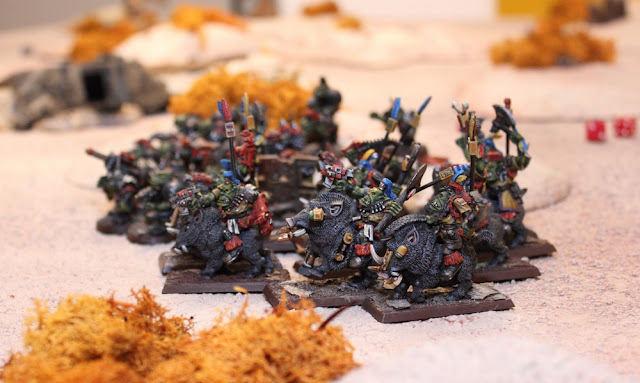 I think some movement mechanics have been taken from Age of Sigmar. In addition to moving normally and running (now called Advance) units also may Fall Back if they are locked in close combat at the beginning of their turn. Neither Advancing nor Falling Back allows the unit to fire weapons during their shooting phase or charge into close combat.


This one's kept rather simple as well. Roll 2d6, for the Psychic test, if you roll equal or higher than the warp charge required to manifest the psychic power it happens (with a small chance of suffering Perils of Warp of course), Psykers may attempt to dispell within via Deny the Witch.

Speaking of dice - there is a very annoying thing in this rulebook: They constantly "roll one dice". Dice = plural, die = singular, right? Why appear stupid on purpose?


Targets can be chosen as you wish as long as they are within range. You even may split fire, so if you activate an IG infantry squad your guardsmen pepper a unit of chaos cultists with lasgun fire while the chap with the missile launcher fires a krak missile at a unit of Chaos terminators. As there are no dedicated rules for vehicles anymore this also means that your Leman Russ Battle Tank may fire its battlecannon at one target and the hull lascannon at another.

Templates are gone altogether, instead, weapons which formerly threw templates across the table now get 'multiple shots'.

Weapon types are remaining, but change a little: Assault weapons may be fired even after running (with a to-hit malus), heavy weapons get a to-hit malus if fired after having moved, Rapid Fire weapons get twice the shots if the target is less than half the maximum range away, grenades may be thrown, pistols may be fired if in close combat.

Yup, To-Hit Modifiers are back!  The renaissance of 2nd edition is upon us and everything will be fine again for us old people! Well, not quite. The modifier is -1 and that's it.

Apart from that everything stays the same. Roll to hit, roll to wound, target rolls armour save. The to-wound table is gone, instead it's all about "is the weapon's strength greater, equal or less than the target's toughness and if so, is S double of T or the other way around?". In the end, this doesn't change incredibly much apart from the fact that a 6 will always wound now and a still 1 always misses.

No big news in terms of wound allocation, saves are rolled for as usual, but after the armour save modifier has been applied. Yup, armour save modifiers are back! The renaissance of 2nd edition is upon us and everything will be fine again for us old people! Well, not quite.

Again, this is mostly so the rules for vehicles can be rolled into the core rules. Vehicles use armour saves now and have a whole lot of wounds.

To counter-act, this weapons who pack a punch do multiple wounds now. A lascannon for example still has S9, AP -3 and a Damage rating of d6, meaning a target will lose one d6 wounds.

Cover has been revamped as well in that it gives a +1 bonus to armour save rolls, no matter the kind of cover used.


In the following charge phase any unit that hasn't Advanced or Fallen Back may declare a charge against any target unit within 12", you roll for the range they actually may move and see if they cover the distance or not. In either case, the target unit may give defensive fire (called Overwatch), only hitting on 6s. The clever thing is that certain weapons such as flamers hit automatically anyway, so without having to put special rules into the core rules one tiny little note next to the flamer's stats fix this and you still get the old Wall of Fire use out of the gear.


So we're in close combat now! The whole term has been replaced with "being within 1" of an enemy model", by the way. This is a curious side effect of the core rule covering everything, from gretchins to flyers and titans - the way they are written is very generic and using vague terms to describe rather straightforward rules. So the whole core rules section reads a bit odd I think.

You may have noticed that the Initiative stat is gone. Units which charge always strike first, even with power fists and such. In fact, the Fight phase starts by ALL units who charged attack, then all units of the inactive player who still are on the table may fight back.

Even vehicles have an Attacks stat now and a strength stat and so on.

After each phase of fighting each unit may consolidate up to 3" to move in on the enemy and get more bodies in the fight.

This is straight out of Age of Sigmar as far as I know. At the end of each turn, you have to check for morale on each unit who took losses this turn. Roll 1d6, add the losses if the total exceeds the unit's Ld the unit loses additional figures.

And that's it really. Those are the new core rules of Warhammer 40,000. In the next instalment of this series, I'll go through the massive rest of what's in the book, the advanced rules and give my opinion on the rules.