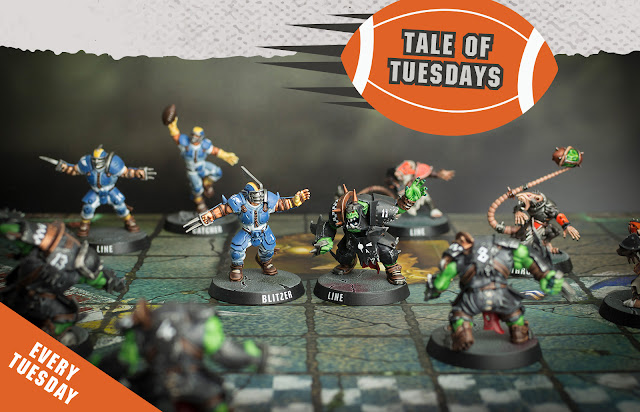 We all love "Tale of Four Warlords" (previously Tale of Four Gamers) in White Dwarf. It was the inspiration for Stahly naming this blog. Well, it's about time we actively participated in our namesake and launch Tale of Tuesdays. And best of all: You can join us painting your Blood Bowl team and win a plastic Blood Bowl team box of your choice! Get the low down after the jump.

If you're unfamiliar with the Tale of Four Warlords format, I'll quickly elaborate. Four hobbyists all choose a different faction from the same game system. Every month they have to paint the same unit/keyword as each other for their chosen faction.

Every Tuesday, one of the Tale of Painters Crew will take a turn to share their progress on their faction. Over the month you will see updates from every participant. The order of the painters will change depending on who has a post ready.

What is the first Tale of Tuesdays' Game System?

Because the number of models in each team is only 12, we'll be splitting each month into a set number of models. Each month the coaches will have to paint three models. These models can be any from the core team. Coaches are free to paint additional models outside of the core team (star players, cheerleaders or the counters that come with the models). These additional models are optional. The important thing is every month, three models from the core team are painted so at the end of the fourth month everyone has a completed Blood Bowl team.


Meet the coaches and their teams!

Arcane
The Dwarf Giants (Dwarfs)
(Arcane is a new guest contributor to Tale of Painters. He has his own blog Gnaw & Order).


What's that, you want to get involved?

We want to engage with all our fellow coaches, so we'll have an eye on these hashtags and stop by for comments and criticism. Every now and then we also feature your finished players here on Tale of Painters.

From all of your teams that were painted during Tale of Tuesdays, we pick our favourite team to win a Wayland Games or Element Games voucher to the amount of a plastic Blood Bowl team box so you can start painting another team right away.

We hope to see a lot of cool Blood Bowl teams painted! Until next Tuesday...