Chat: Finding my feet with Contrast 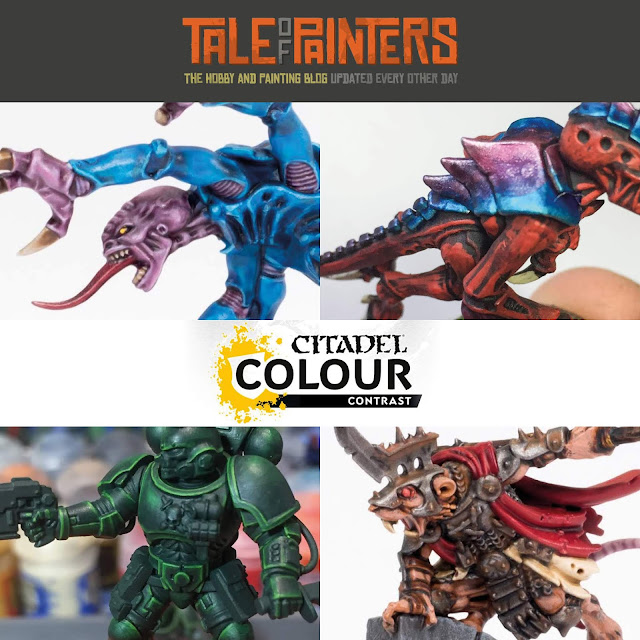 Full disclosure, Games Workshop sent me the full range of Contrast paints free of charge. This isn't a paid for promotion and these are my own opinions.

Firstly I'm a Citadel Colour user. I've done the switch to other manufacturers and switched back when Games Workshop released their Base, Layer, Shade, Edge System. When Games Workshop announced Contrast it really grabbed my attention. Long story short, a couple of emails later, Games Workshop selling out most of their range in three days and a couple of weeks wait and I'm now in a position to play with the new paints. Find out what I think after the jump. 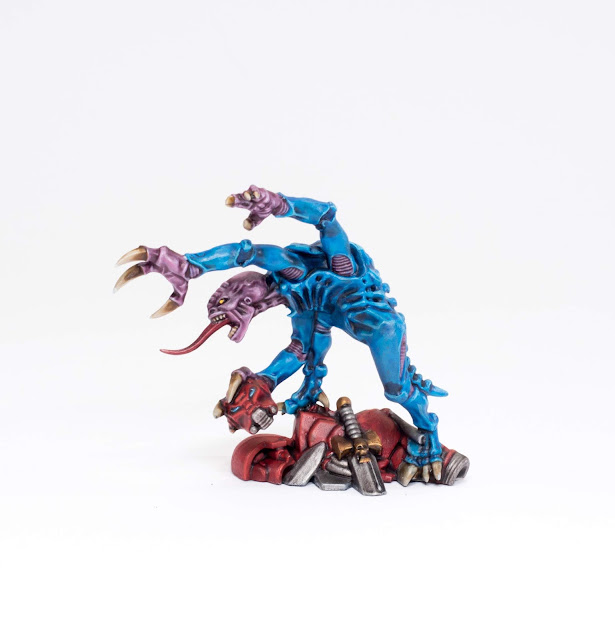 My first few experiments were disasters as I tried to paint small details and large areas together. It was impossible to be accurate with a large brush loaded to the gunnels with Contrast paint. I wasted two hours and was left with messy Genestealers. It was a total backwards step and I felt deflated.

The next day I regrouped and had a chat with Stahly. He gave me some good advice and that evening I painted the above Genestealer. Let us start by talking about the miracles first. The Claws and tongue are done with the "one thick coat" approach Games Workshop promotes. For such small details it's saved a lot of time not having to do fiddly work. 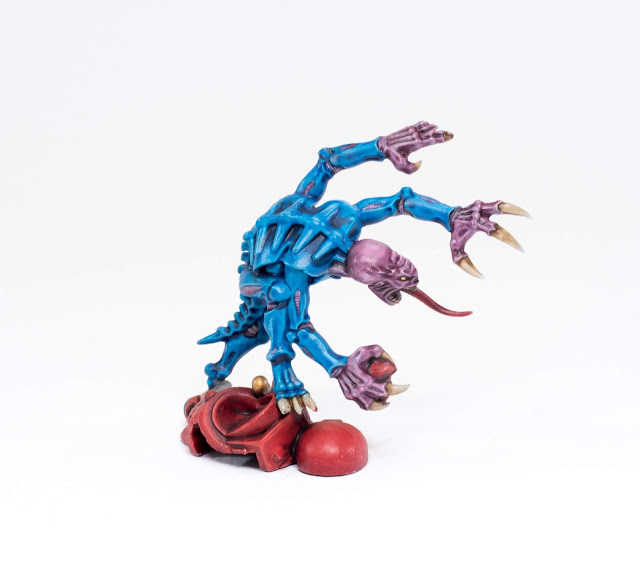 I can't say the same about the blue and purple areas though. Let me explain. The very first thing I did was undercoat the mini with the Grey Seer spray. I shook it well and sprayed it outside when it was warm. It went on beautifully. Incredibly smooth. The same is true of Wraithbone. These sprays are magical in their smoothness. Once dry, I thinned Talassar Blue with Contrast Medium and slapped it all over the model where I wanted the blue to go. Once dry I hit it a second time with Talassar Blue straight from the pot. This gave me a really nice coat with minimum pooling but with plenty of shading. I then grabbed my Teclis layer paint and a large drybrush and went over the whole model. This dry brush kept the shading but lessened any pooling. Finally using  Temple Guard Blue I painted on a few edge highlights. Over all this was still incredibly fast to paint but it looks less like it is just Contrast paint on its own.

For the purple, I did the same as the blue, but instead of drybrushing some area highlights, I created a glaze of lahmian medium and Pink Horror and carefully painted thin layers of the glaze over the top raised areas to remove some of the patchiness and pooling. Once again super fast to do and just lessens the uneven nature of Contrast on larger flat areas. 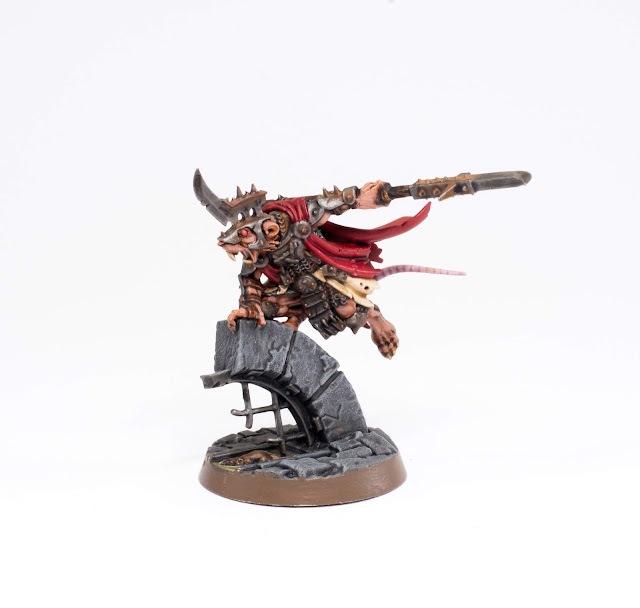 Skritch from Spiteclaw's swarm was fun to paint. He isn't pure Contrast. He utilises some layering and some drybrushing. I undercoated this model with Wraithbone. Let me start by listing the one thick coat miracles again. The bone robes, the tail, the teeth, the weapon shaft, the red robes, the fur and the straps. All of these were painted with just Contrast. The tail still amazes me. I shudder to think how long it would take to paint with shading and layering. This was seconds with Magus Pink. The bone robes are also only one coat and honestly I don't think I could do better with layering and shading. The red robes were hard to paint as I had to use a large brush and I think I covered it in maybe four or five brush strokes of Blood Angels Red Contrast paint which had a huge positive affect on limiting pooling. I started at the top of robe and drew the brush downwards following the flow of the cape. 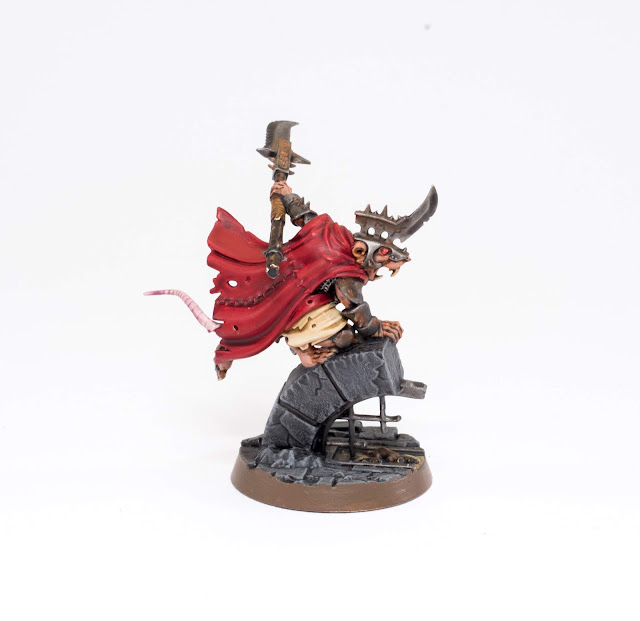 The Skin, Straps and Fur were all painted with a Contrast paint, but the skin was then highlighted using Deathclaw Brown and Cadian Flesh Layer paints. For the metals I painted these with Ironbreaker (layer) and then mixed Contrast Medium with Nuln Oil. The contracting nature of Contrast Medium really helps make sure that Nuln Oil flows into all the cracks and crevices giving a nice black outline to all the metal segments. You can also use this mix to careful shade the blade edges as seen on the helmet spike above. For rust I used Contrast Medium with Skrag brown. The Nuln Oil mix was used over a grey basecoat on the base and I just drybrushed highlights on to that. 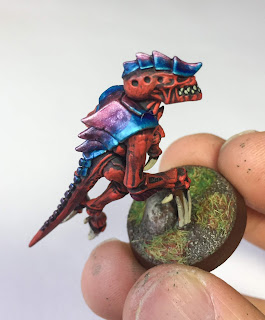 The above Gaunt's carapace was painted using Runefang Steel. I then used Volopous Pink down the centre of the carapace with a thick coat. Whilst this Contrast paint was still wet I painted on Talassar Blue on the edges allowing the two Contrast paints to bleed into each other. The result is a really nice iridescent, metallic blend of colours that retains highlights along the edge. This is also really good for heat blooms on gun muzzles. 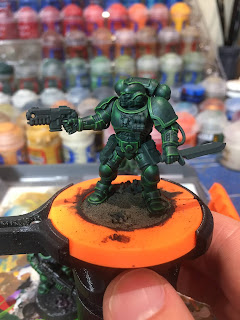 This Dark Angel test was all about using Contrast Dark Angels green to help blend traditional glazing and layering together. I painted the mini with a base coat of Caliban Green (base paint) and then using a mix of Warpstone Green (layer paint) and Lahmian Medium (technical) to make a glaze I built up translucent layers to area highlight the armour. Then I edged the panels with Moot Green layer paint. Finally I thinned Dark Angels Green (Contrast) with Conrast Medium (technical) 1:1 ratio  and applied this glaze over the armour and wow! It really helped blend my layers together. Super impressed.

Conclusion. I've only had these paints for a couple of weeks and I need a long time to play and unlock all the possibilities. These paints withhold secrets, that ingenuity and creativity will discover. There will be failures as I experiment, but there will also be successes. That's the fun of this paint range. It's brand new and with that it brings brand new possibilities. If you want to paint an army in a weekend and don't mind a little pooling these are great. If you want to do more technical blending and glazing these are great. If you want to save time on small tiny textured areas these are great. Overall I recommend them and can't wait to learn more with them.