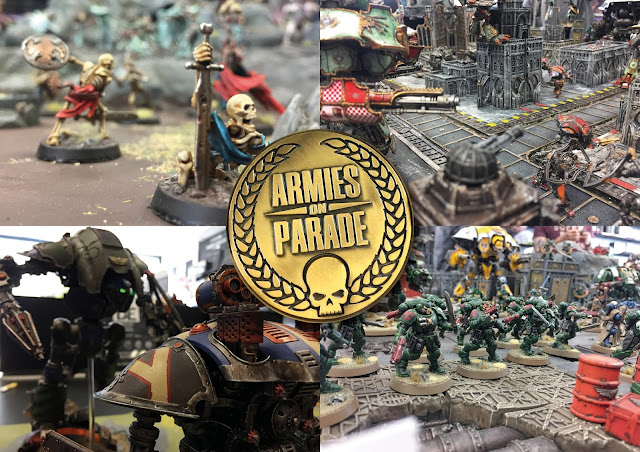 Hobbyists all over the world flocked to their local Warhammer Stores on the 19th October 2019 and I was one of them. I only decided to enter three days before the the event after chatting with friends. I decided to take my Dark Angels which I'd been painting since September 2018.  Read on after the jump.

Friday night I packed my army case full of Primaris Dark Angels and dusted off my terrain board ready for the big day. I'd decided to enter for fun, let me explain what I mean by that. I wasn't interested in winning. What I wanted from the day was to see some great hobby and chat to some like minded hobbyists. I also wanted to take the Dark Angels as they were in White Dwarf recently and I thought it would be awesome for people to see them in the flesh.

On the Saturday I jumped in my car to head over to Warhammer Enfield which is my local store. I arrived promptly at 10.30 and two entrants had already set up. Shortly after I had set up the fourth entrant arrived and set up. Voting started at 11am. 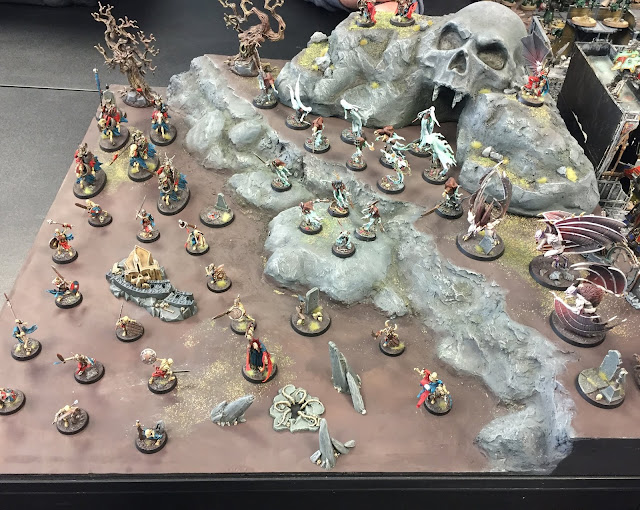 Andrew's Death army is beautifully painted with a strong, bright, complimentary colour scheme. The skull for the hill he bought from the fancy dress shop next door to the Warhammer Store! He was a super nice guy and I asked how he painted his Banshees and Skeletons. His bone recipe is 10 steps! The banshee's are done with technical paints through his aribrush on a Corax White undercoat. 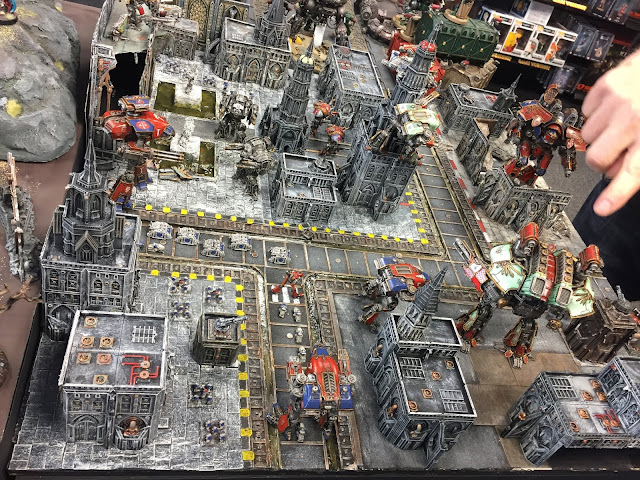 Chris' Titanicus Board was scratch built with cardboard paving slabs. It's a huge diorama with the models glued directly to the board. This for me was the whole package, scratch built, great painting, old models, new models and it told a story. It got my vote. Chris was another super nice guy and I spent ages chatting about all his previous entries. He is Mr Armies on Parade and all being well I'll be sharing his incredible entries in a blog post soon. 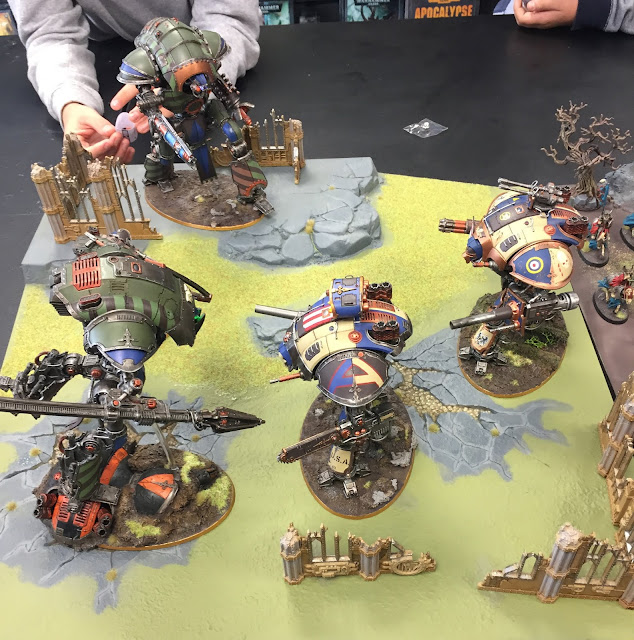 David's board was Knights vs Knights and the conversion work and basing of his models was super impressive with a top notch paint job to boot. His Knights had LEDs in the eyes which was above and beyond. Andrew had actually donated the spare Knight to David for his base. 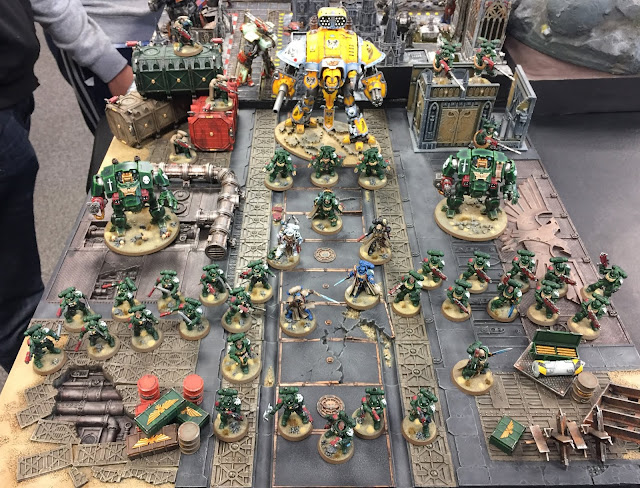 And these are my Dark Angels. The guys were shocked when I said the blending was by hand and not airbrushed. Dennis the Store Manager immediately told the others these were featured in last month's White Dwarf which was greeted with more "oohs, ahhs" and a "really?" 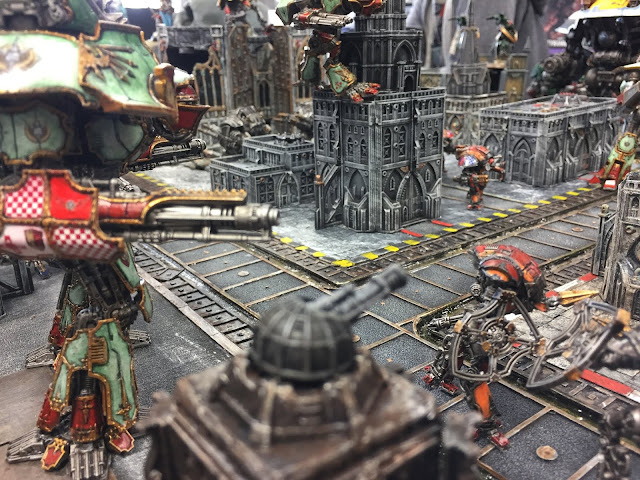 Once we'd voted, we stood around the store and complimented each other on our hard work and chatted about all manner of different things. It was really social and just so nice, exactly what I wanted from the day. 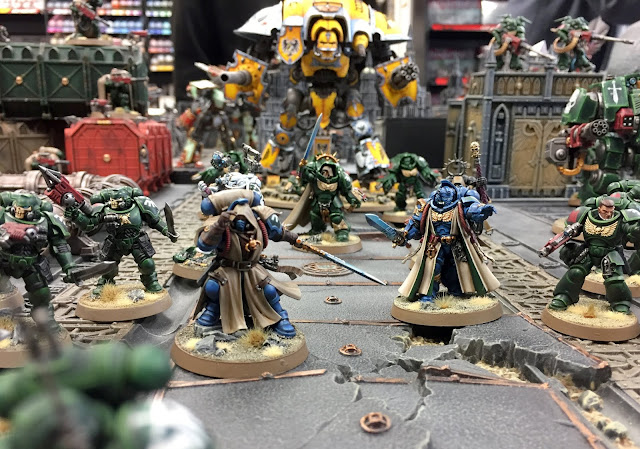 At around 12noon I jumped back in my car and popped home for some lunch. I later returned to Enfield at around 2.30pm but this time with my Wife and two year old daughter who were going to go and do some shopping. Before they went, they popped into the store to cast their votes. I put my toddler on the floor and let her walk around the entrants and asked to pick her favourite. 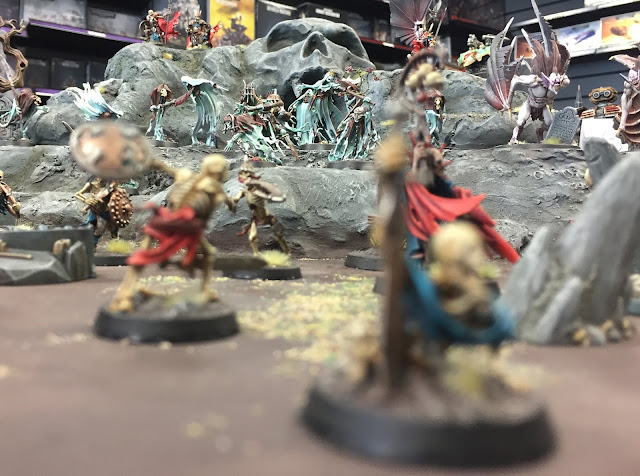 My daughter picked Andrew's Death Board. 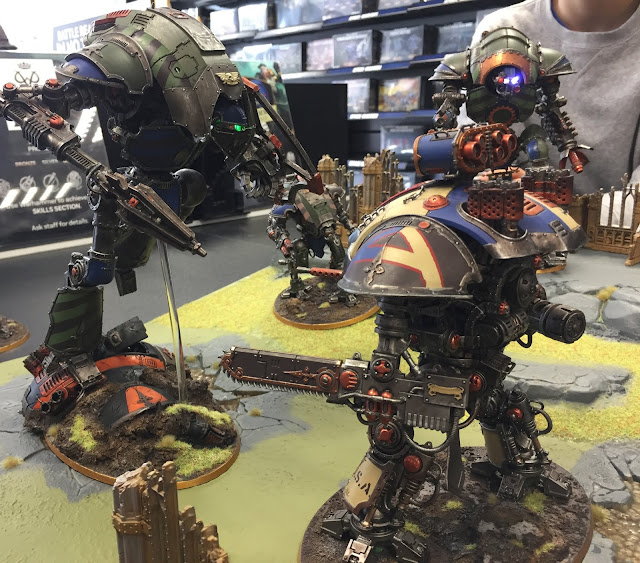 Next up was my Wife's vote. She choose David's Knights. She really liked the LEDs for the lights. After that they left me to await for the announcement of the results at 3pm. I genuinely had got so much out the day already I didn't need a medal and would have been over the moon losing to three other fantastic entries. 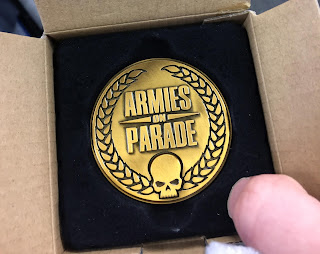 So the results, in fourth place was David and his Knights, Third and Second place was close with a single point in it but Andrew and his Death board came third with last year's Champion Chris coming second with his Adeptus Titanticus Board. Which to my surprise, meant I picked up Gold. I was so happy and I wasn't expecting it at all. I'm still in a little bit of shock as I type this.

After that we all just chatted, laughed and shared hobby stories with each other for another couple of hours. Honestly, it was great. The Hobby Community is thriving in Enfield's Warhammer store.
If you've never entered Armies on Parade, I urge you to. It's a fantastic opportunity to chat with fellow hobbyists about the work. Even if you don't plan on entering, head down and cast your vote and be a part of it.

I can't wait for next year's competition now.