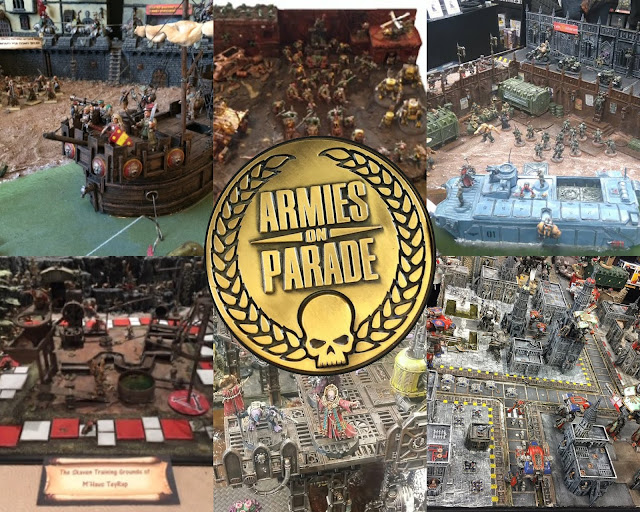 Hi all, Garfy here. The other day I shared my Armies on Parade experience with you and in that post I talked about all the entrants, one entrant stood out and I dubbed him "Mr Armies on Parade". Well today I'm pleased to introduce you to Chris and seven years of amazing Armies on Parade entries. Settle down with your favourite beverage and get ready to scour the pictures for all the tiny little fun details... see if you can find the Dalek! Over to Chris. 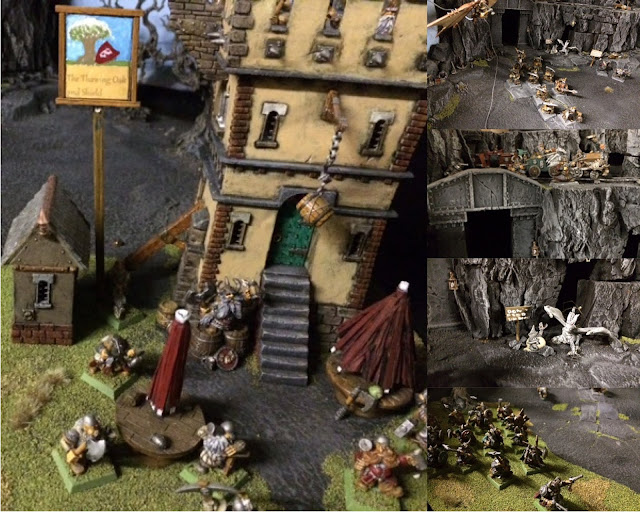 Armies on Parade 2013
"This was my first attempt at entering and the only time I have used one of the Games Workshop tiles. Unfortunately I don’t seem to have a picture of the full board which is a shame, and these pictures aren’t great (they get much better in subsequent years) but you get the general idea. I had the idea for the train first which was made from bits from the Dwarf miner set as well as bits of wood and green stuff. Other things of note are the Dragon, with baby, and roast chicken hanging above it’s head; dwarves from the first plastic citadel set from 1985 and also from heroquest; the pub (“The Thawing Oak and Shield” proprietor Joseph Bugman) with tables and umbrellas and a band playing on the roof; hang glider (made from dark Eldar sails! Unfortunately what you can’t see is that the dwarf warriors in the foreground are charging towards the White Dwarf ‘Film Director’ model. My entry won first prize and since then Armies on Parade has become the modelling highlight of my year!" 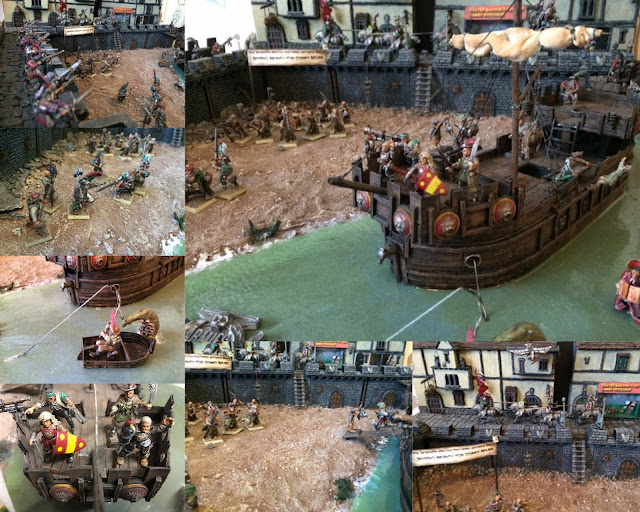 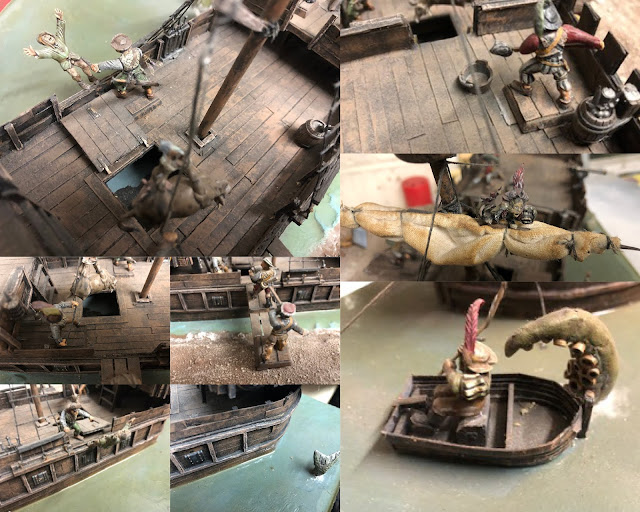 Armies on Parade 2014
"Year 2 and I was much more ambitious. The board was built from the ground up on a 2ftx2ft sheet of MDF. The Harbour walls were the old Warhammer fortress and the watchtower at the end is the same kit that I used for the dwarf pub the year before. The buildings at the back are mostly scratch built with plastic doors and windows from mordheim kits and other bits. The sailing ship is entirely scratch built from card, wood and other bits. Things to look out for: ‘The Mordheim Singers featuring Artorius Braun raising money for Comet Relief’. Artorius Braun is the one with his head on fire ( for those who were not watching TV in 1968 just google The Crazy World of Arthur Brown!); Games Workshop with ‘Warmaster’ figures in the window; the unfortunate fisherman; the four figures in the forecastle of the ship are my regular gaming group (I am in the black armour and my son is carrying a shield with our family’s actual heraldic design!)
I won silver for this and I think it’s my favourite." 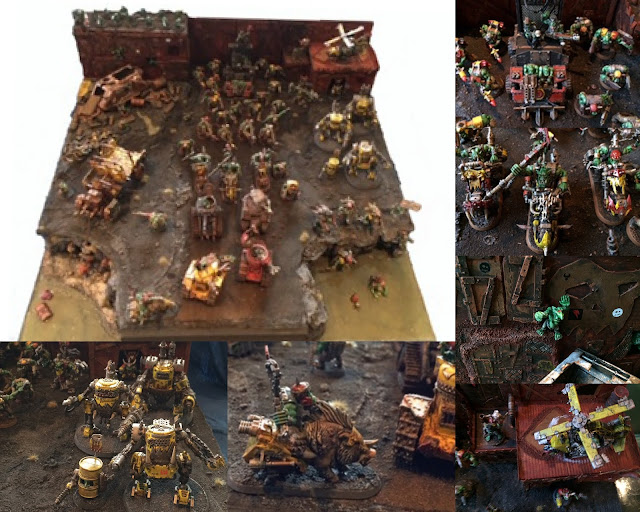 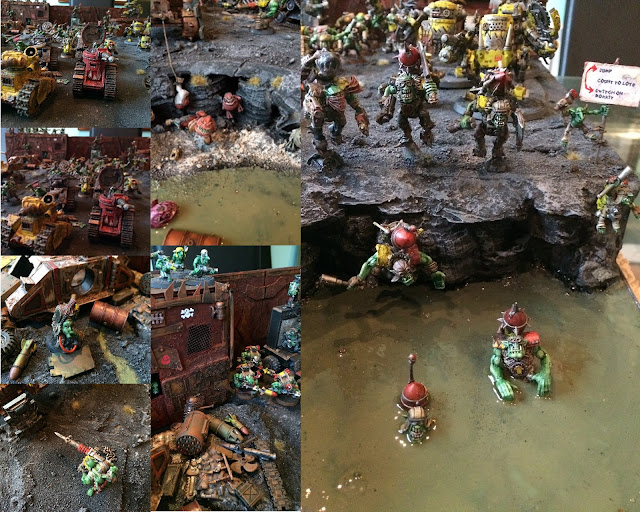 Armies on Parade 2015
"Year 3 and this was inspired entirely by me wanting an excuse to buy the forgeworld Grot Tanks ! I also wanted to do a ‘multi level’ board. All the buildings are scratch built which was great fun as was painting loads of orks ! Things to look out for: Stormboyz in training whose instructions are unfortunately in the wrong order; Cyboar conversion; ork in looted bullgryn armour; grot killakan; Ork Version of the Doof Warrior from Mad Max fury road; a hidden dalek. I was very pleased with this one and it won gold." 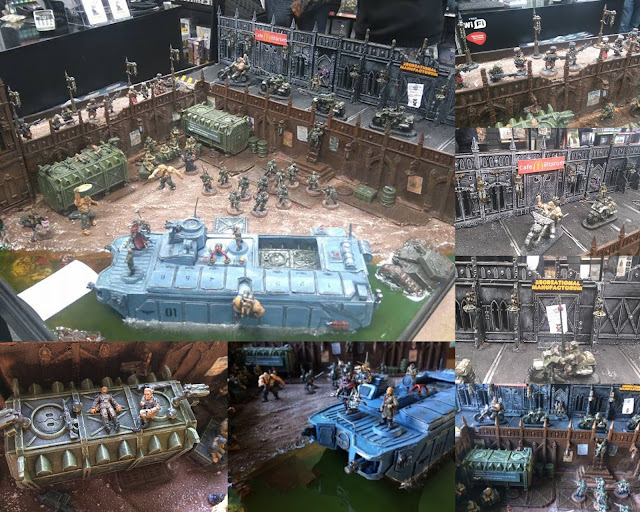 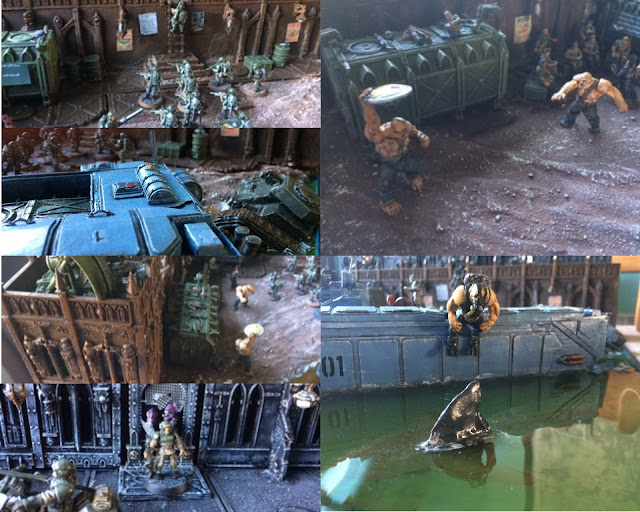 Armies on Parade 2016
"For my 4th year I decided to do a 40k version of the harbour scene from two years earlier. The layout was the same with the Knights replaced with rough riders, the sailing ship replaced by an amphibious landing craft, the band replaced by a commissar reading inspirational texts to the troops, and so on. The landing craft is entirely scratch built from cardboard, the harbour walls and buildings are made from sector imperialis kits, and the Chimera emerging from the water behind the landing craft is made from plaster after I took a mould of the front of one of my Chimeras. Things to look out for: Ogryns playing frisbee with a Tau drone; guardsman sunbathing on a container; an Ogryn scuba diver about to make life difficult for a very large shark; Cafe Militarum ready to hand out happy meals.
This one also won gold." 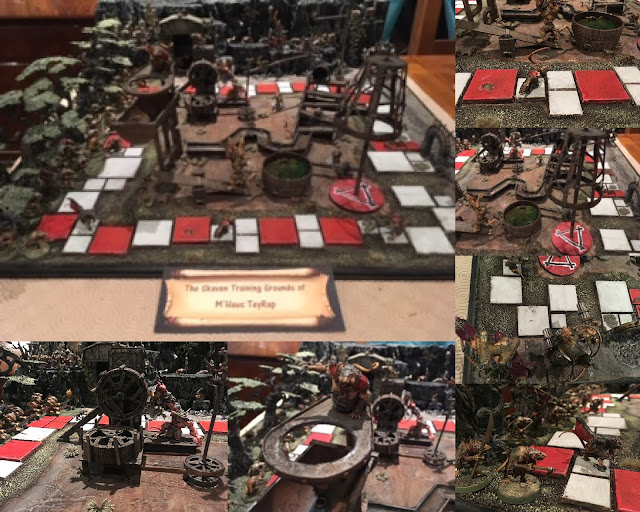 Armies on Parade 2017
"My 5th entry was probably the most popular one with other people and is probably my second favourite. The idea is that it’s the Skaven Bloodbowl team’s training ground but is based on the popular children’s game, Mousetrap. The trees and the team entrance were reused from the dwarf board as was the bark rock face. Some of the mechanisms are made from various Skaven vehicles such as the doom wheel. The board ‘spaces’ are various sizes of square base. Things to look out for: ‘Glart Smashrip’ acting as the ball that rolls in to the bath; Skaven from the Advanced Heroquest game; lots of rats ! This also won gold." 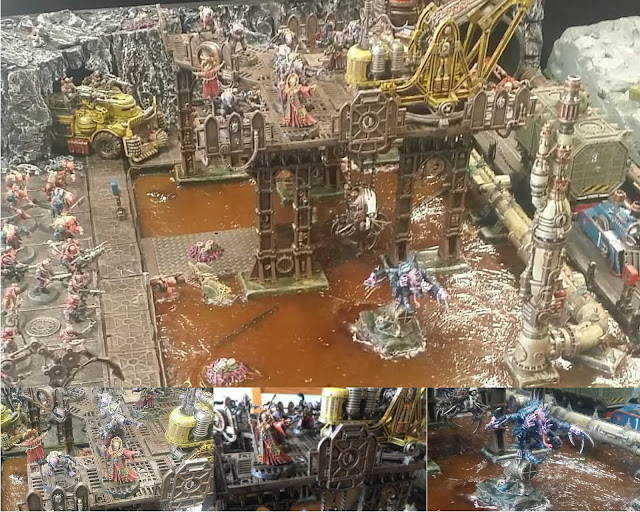 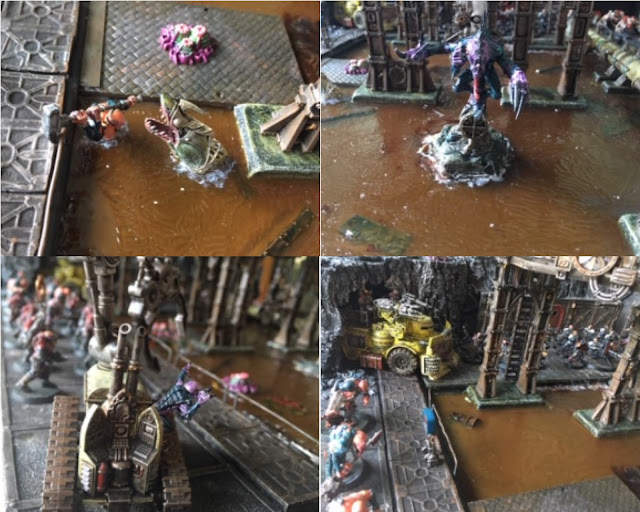 Armies on Parade 2018
"Last year I was quite inspired by the genestealer cult models but, for some reason, in the end I didn’t really enjoy painting them that much. The bark rock face made it’s third appearance this time with doors from the Necromunda box, set in to it. I really like the sector mechanicus structures and weathering them was fun. The roadway is copied from the sector imperialis boards and is made with sandpaper representing the tarmac. I poured a lot of varnish on to this board (I do like modelling water) and on the day before it had to be finished I discovered a lot of discolouration which to me looked awful but everyone else thought it was supposed to be like that !
Things to look out for: an Aberrant being attacked by a large fish; fully fledged genestealers emerging from the tunnel and one, suitably slimy, coming out of a broken pipe; a little blue engine which has happily survived in to the 41st millennium.
This one also one gold but is probably my least favourite.
(These pictures also give some insight in to my lifestyle, with my swimming trunks visibly hanging up to dry and also a jar of whole earth peanut butter!)" 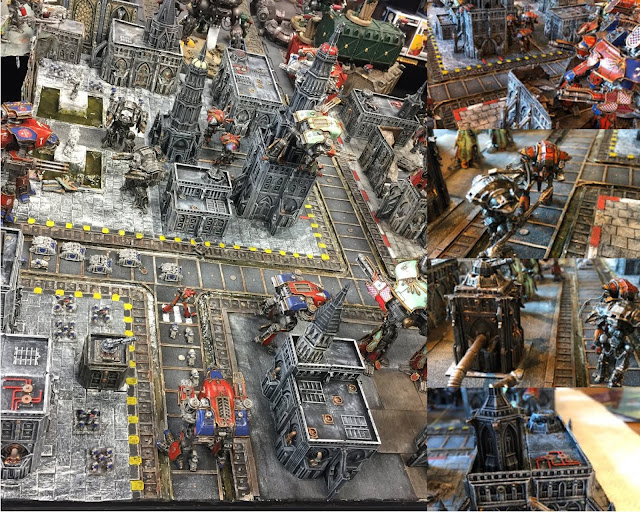 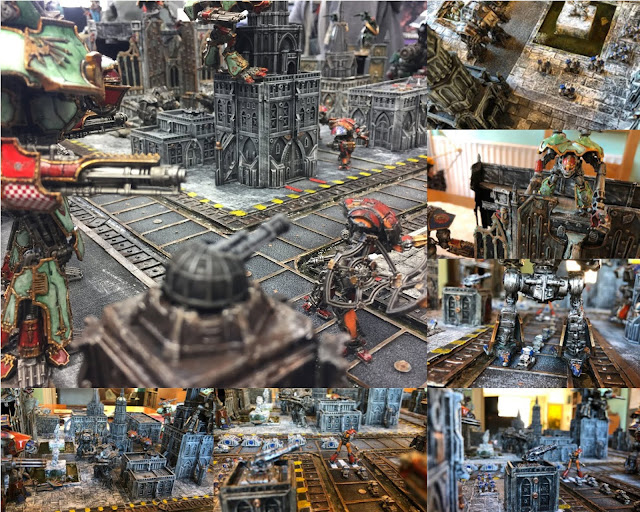 Armies on Parade 2019
"This brings us right up to date. Again this was inspired entirely by the desire to build and paint some really cool models: the ‘Adeptus Titanicus’ Titans and Knights. Originally the plan was to make all the buildings scratchbuilt, scaled down versions of the old 40k sector imperialis kits, but I soon realised that this was far too ambitious and I settled for one (I can’t remember what it’s called !) I have included a picture of the original full sized version with it’s cardboard equivalent. The spires kit makes the titanicus building a lot more interesting so I am not too disappointed. The theme of the board is a battle between Legio Solaria (the only all female Titan legion), their arch enemies Legio Vulpa, and the Knight houses affiliated to the two legions. I also threw in some epic World Eaters ! Things to look out for: some of the original metal Knights (including one with very good road safety skills), an original plastic warlord Titan (about a quarter of the size of the new one); two thunder warrior statues (one partially demolished and actually cast in plaster); an homage to ‘King Kong’ with a Warhound vs a Thunderhawk; and two ponds with goldfish (I had to get water on there somewhere) !
This one won silver ;-)"

Thank you Chris for taking the time to share all the photos and write down your thoughts. If you enjoyed Chris' guest post, why not drop him a comment below.  - Garfy.
Armies on Parade / Guest Posts