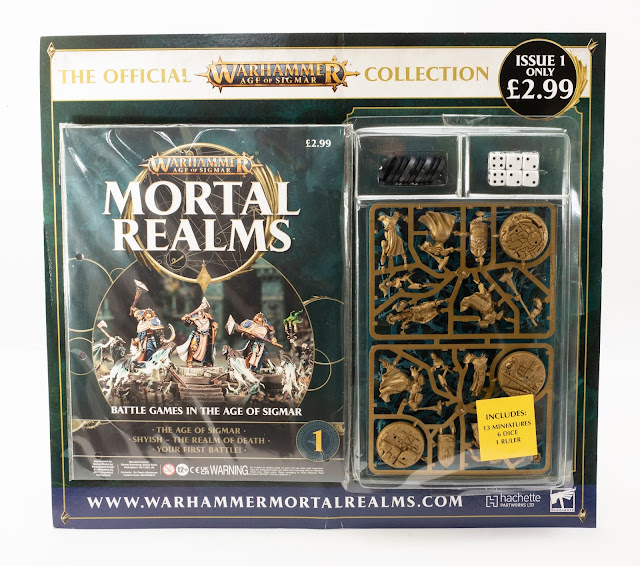 This review covers the first issue that was released in Warhammer store, newsagents and supermarkets in the UK. This issue was available to buy for a two week period initially. Back issues were available on Hatchette Partworks website but at the time of writing are currently sold out. I believe you can start a subscription and still ask it to start on issue one. As I mentioned this is UK only at the moment. The Warhammer 40,000 Conquest version was rolled out in other territories so there is a good chance the same will happen with Mortal Realms.


Having managed two collect and paint half of Warhammer 40,000 Conquest, I thought I'd give Mortal Realms a look as I'm really fond of the Age of Sigmar setting. Mortal Realms is a weekly Magazine which includes models, paints and gaming accessories. It drip feeds you everything you need to collect, paint and play Warhammer: Age of Sigmar. It's great if you're just starting out or if you're like me, you have an existing army which you want to add to. 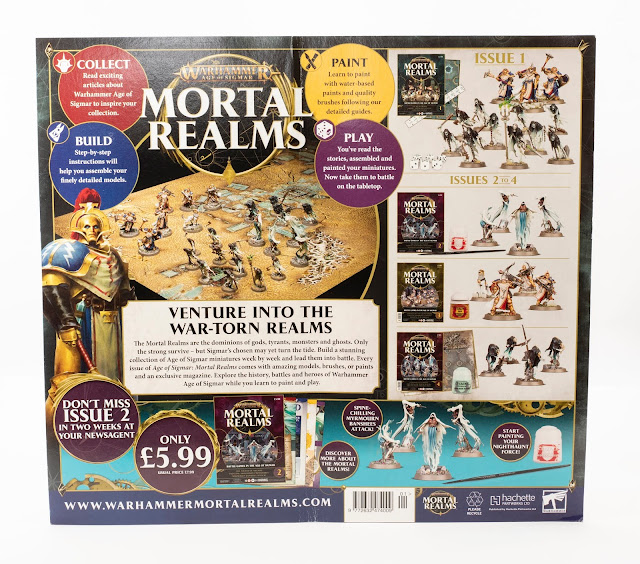 The first issue is priced at £2.99 and comes on a huge card back with the model sprues in a plastic see-through blister box and the magazine is in a clear polybag. The back of the card explains the Collect, build, paint and play nature of the collection and also shows you what to expect in the next few issues. Issue 2 is £5.99 and comes with a brush, a paint and four Mournflight Banshees. After that issue three and onwards are £7.99 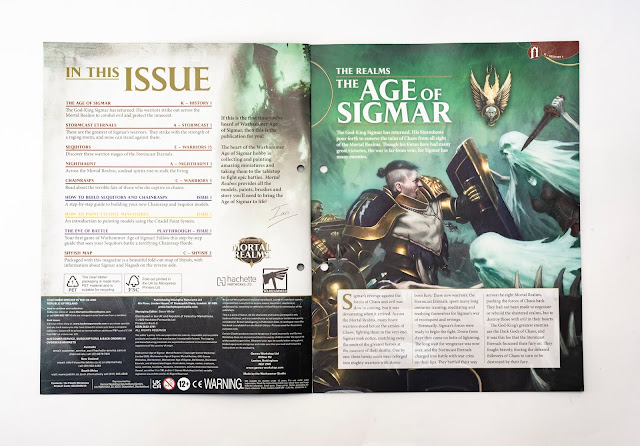 The magazine is packed with short articles usually no more than 4 pages long. The articles build as you collect more issues. The idea is you take your Mortal Realms magazine and pull apart the pages and reorder it in the binders. You can use any binder. You will get one binder as part of a subscription. If it's like Warhammer 40,000 Conquest, then other binders will be charged (£7.99) to your subscription unless you opt out. There was some concern of these charges from the Conquest community, so I'm not sure if Mortal Realms will adopt this strategy or not. Binders were availabe to buy from the Hatchette website while the stocks last. 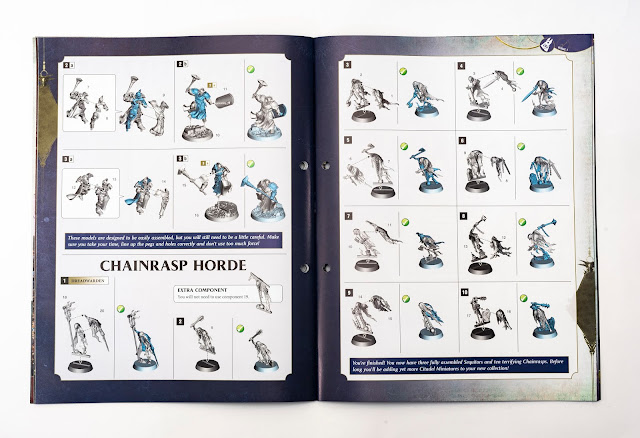 The magazine also includes detailed build guides for the models you receive with your issue. These are lifted straight from the actual assembly guides that come in the boxed models you buy from Games Workshop. They're easy to follow and include extra tips. 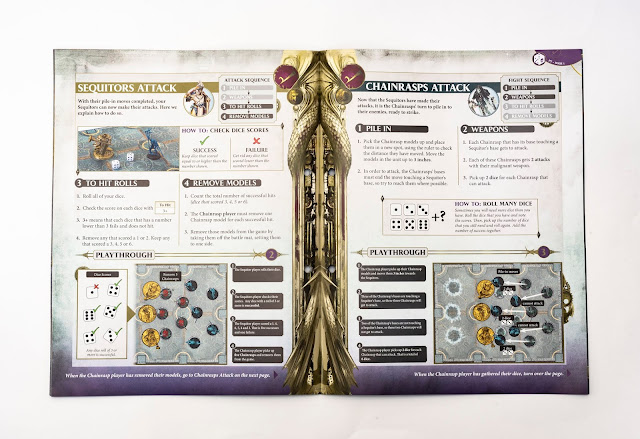 Gaming is handled differently than if you were to buy a rule book. Each issue will concentrate on the models you received and the rules that relate to them. Because this is the first issue they talk about the core mechanics of moving and fighting. Whilst this will seem basic, it will grow with every issue over the collection will be more in depth than a rulebook. I've played Age of Sigmar and I actually like reading these because it's written in a friendly human way instead of a concise and to the point rule.  It's a nice way to get a soft clarification on something that doesn't make sense in a rulebook. 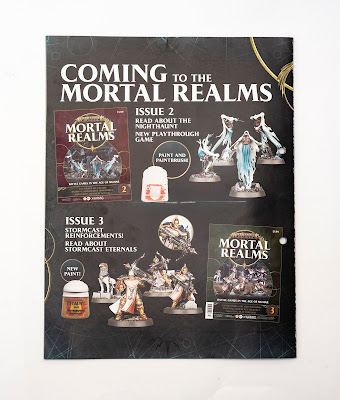 The back of the first issue tells you what to expect in the following two issues. This is always cool to see what you're getting next. When I was doing Conquest this helped me plan my painting timelines and deadlines. What I find really interesting is the inclusion of paint with the models. Conquest didn't do this. You'd have issues with models and then you'd have issues with paint. The issues with paint didn't really sell as well as the magazines with models on the front. So I can see why've changed this and I think it's much better. 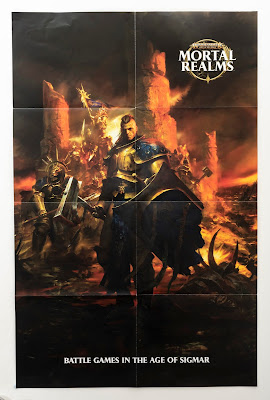 The first issue also includes lots of additional paperwork. A very large double sided poster of a Stormcast Liberator with the reverse giving you the hard sell for the partworks collection 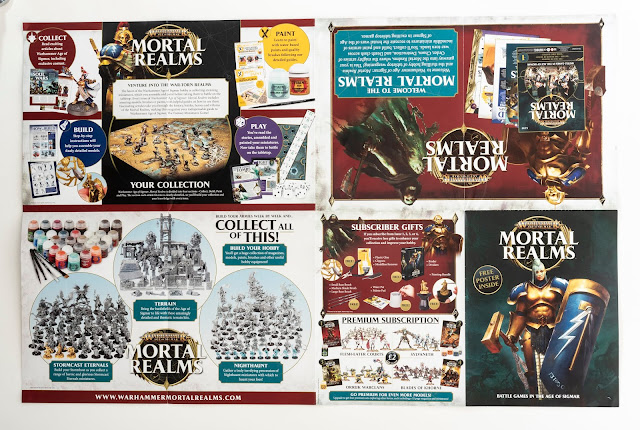 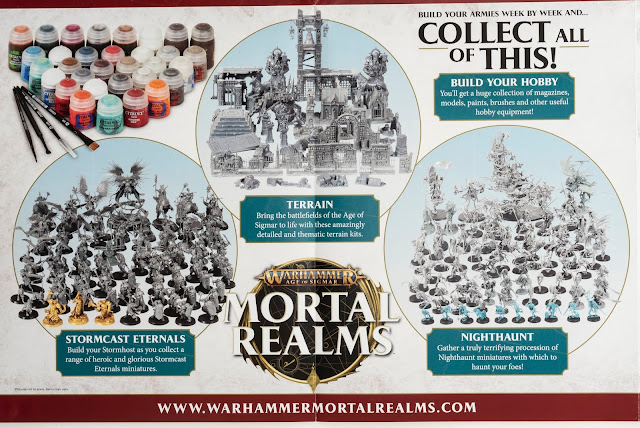 This is the bit everyone is interested in. What do you actually get? I've photographed this in a high resolution to help you see what's available. Looks like it's a great mix of easy to build sets, boxed games and some larger kits. Terrain collection looks modest. Looks like you get enough for a 8x4ft gaming board which is good. Good selection of paints and brushes. Plenty of people have added up the value to see if there is a saving so you can find that information online easily enough if that's important to you. 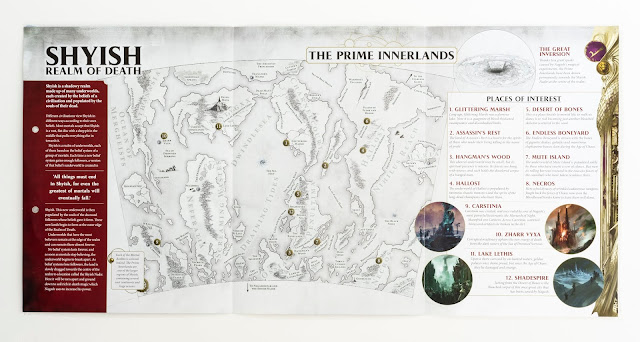 This 6 page pull out was cool and something I don't remember getting in Warhammer 40,000 Conquest. because Age of Sigmar is relatively new all these maps and information on the Realms is very welcome. 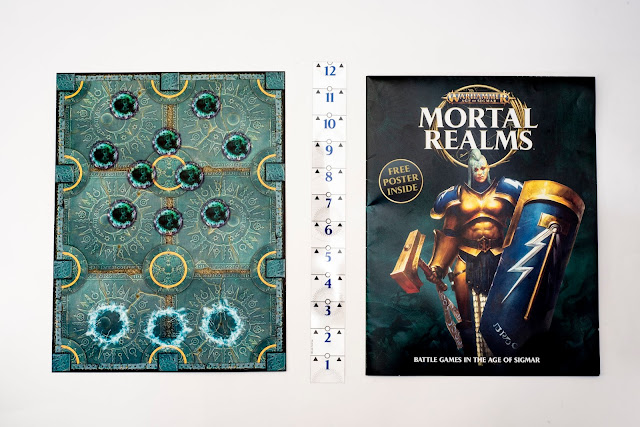 A small card gaming board and plastic ruler are included so you can play through the first steps in the magazine. The gaming board is double sided. One side marks where to stand the models, the other side has the same background but no model setup circles. I suspect this will overlay bigger card game mats later on to represent a flat terrain outline. On the right (above) you can see the folded poster cover. 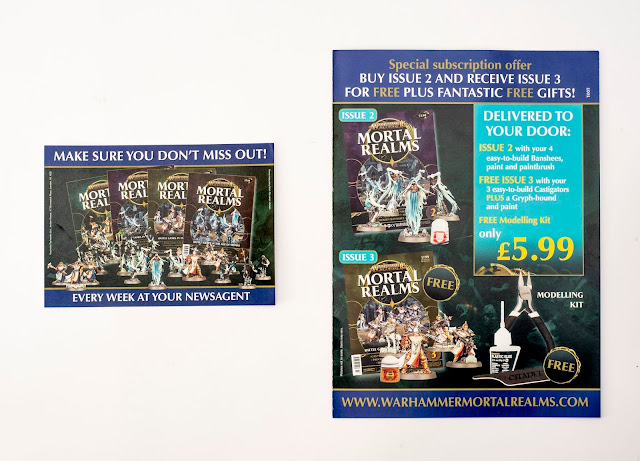 You also receive a small postcard which you can fill out and give to your newsagent so they can order your copies in for you if you don't want to subscribe.  If you do want to subscribe then the leaflet on the right gives you al the information you need including what you get free. Subscribing was great for me when I received Warhammer 40,000 Conquest. They don't charge you anything extra for delivery so it's super convenient. They also delivered Conquest four issues at a time. So you'd get a single monthly delivery. This was good for me as I could undercoat all the month's models in a single go. 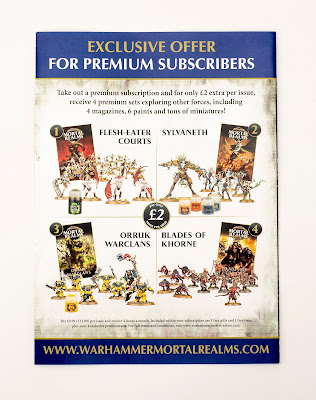 Warhammer 40,000 Conquest had a very lack lustre bonus for subscribers where you would get a handful of data cards and a card gaming matt and some dice for an extra £1.50 an issue. Every 20 issues this worked out to be £30 and was a bit of a swizz and no one liked it. They've changed that now. Now for £2 and issue you get paint, war scrolls and models for a different faction. A much better deal! I can see a lot of people taking them up on this. 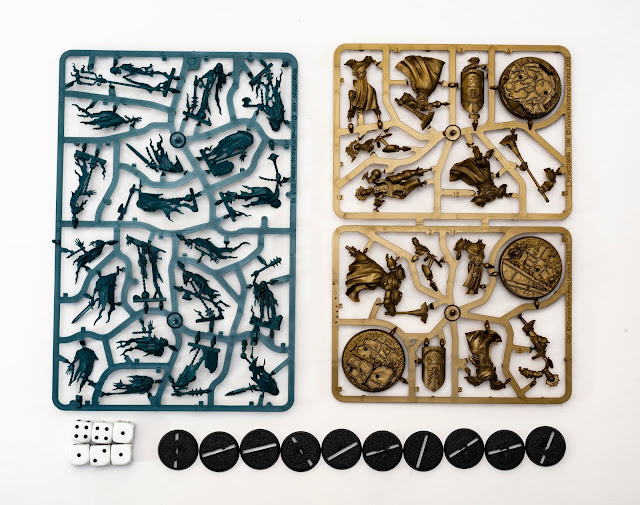 Finally, we have the models and dice. You get 10 Easy to Build Night Haunt Chainrasps and three Easy to Build Stormcast Sequitors. It's probably the greatest deal and the saving is remarkable. You should definitely pick up the first issue for the savings alone but I think you'll be pleasantly surprised by the magazine which if you're new to the Age of Sigmar setting is really informative.