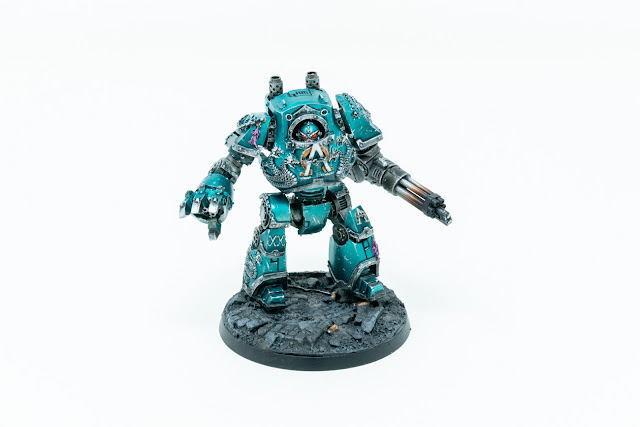 Hey everyone, Silvernome here back with more Chaos Legion goodness!

I’ve always been a fan of the Chaos Legions, but since I mostly play Death Guard and Thousand Sons I never really have had the chance to paint the other Legions without building out a force. I’ve always had a soft spot for dreadnoughts, they are just so iconic to Warhammer, so I decided to start collecting Contemptor Dreadnoughts from each legion to give me that chance to paint them all. When I’ve eventually collected and painted them, the grand plan is to make a small diorama to show them off.

My sixth dread in the series is the Alpha Legion! 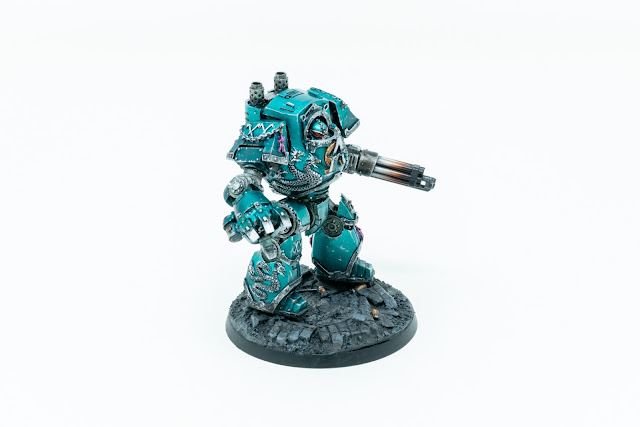 I’ve been keeping this guy on the sideline awhile while I contemplated how I wanted to approach the color scheme. I really liked how the metallic armor turned out on my Thousand Sons dread, but I definitely wanted the color to be different. I had thoughts of mixing transparent paints a bit but couldn’t quite find the recipe I liked. 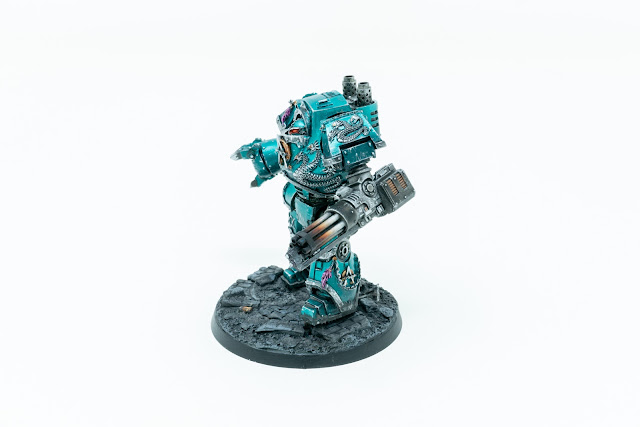 I ended up using the Terradon Turquoise contrast paint from Games Workshop. It was the first time using any of the contrast paints and I rather enjoyed using it. It definitely sprayed differently than the Badger Ghost Tints – thinner and easier to spray and the color shifted darker and more contrast than the ghost tints. Even better, I was able to use it as a wash in the nooks of the armor to deepen the colors. 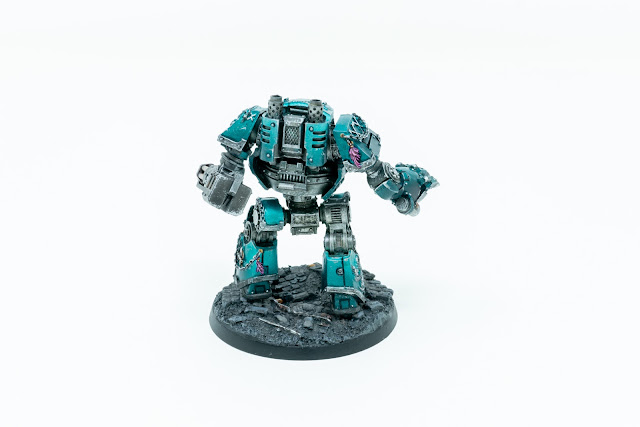 As I shared in my previous Contemptor posts, I fully magnetized the dread (you can find my quick tutorial my Youtube channel) so I could hot-swap weapons on them all. I also magnetized the feet of the dread so when I eventually do a diorama, it can look at home on that display as well as a base themed for my army.

I recorded the process and will have a tutorial video “soon”. In the meantime, you can also check out a 4K video look at this Alpha Legion dread on Youtube:

If you like this model and want to see more, you can check out my site www.silvernome.com or follow my gaming group’s Instagram - and make sure to leave a comment or reaction below.
Guest Posts / Horus Heresy / Showcase / Traitor Legions