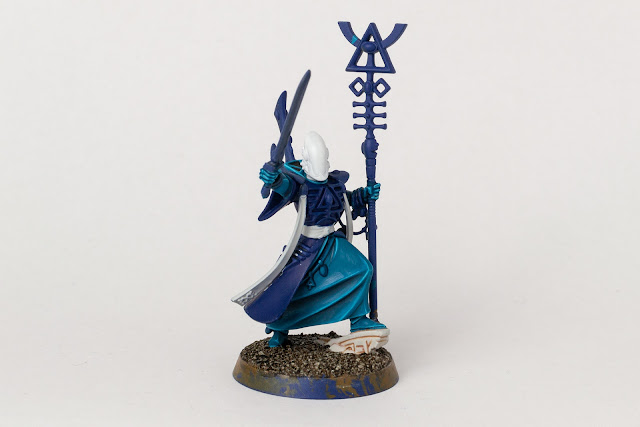 Early WIP of my Iybraesil Spiritseer. Got this model in the Wake the Dead box, but didn't get around painting it until now. Actually, I haven't added anything to my Iybraesil collection for quite a while, sad. So it was about time ;)


The model is a fantastic upgrade of the original Spiritseer model, a more powerful pose, more 3D, better proportions (even though it's pretty large and towers over older Eldar models like Guardians or Dire Avengers). As you might notice, I made a head swap. The new head comes from the Hemlock Wraithfighter kit. The original head mimics the shape of the Wraithknight head, but I wasn't a huge fan of that and got a Skathach Wraithknight instead, whose head I much prefer. I feel the shortened Hemlock Spiritseer head is a better match to the Skathach's one and I haven't seen this conversion online yet, so I was eager to give it a try.

I also put the model on the new 28.5 mm base size. Let's face it, it will become the standard size for Aeldari models, so I'm mentally preparing to rebase my collection at some point. But I have to say, the new base size is perfectly suited for the model, not too small, not too large.

What do you think?