Hi everyone, my name is Shvagyer and I have the pleasure and privilege of being your guest poster today. A few words about me: I’m an IT engineer from Poland, I have been painting Warhammer models for almost eight years (and model tanks and airplanes prior to that), and I also enjoy kitbashing.

Today I would like to present my World Eaters Kill Team that I made in May. It was a carefully planned-out project with all bits selected and accounted for prior to making any purchase. I bought all the necessary parts from an online bits vendor. When they arrived, I put together five warriors of Khorne. Let us look at them in detail. Later on I will describe what paints I used and what philosophy I followed while painting them. 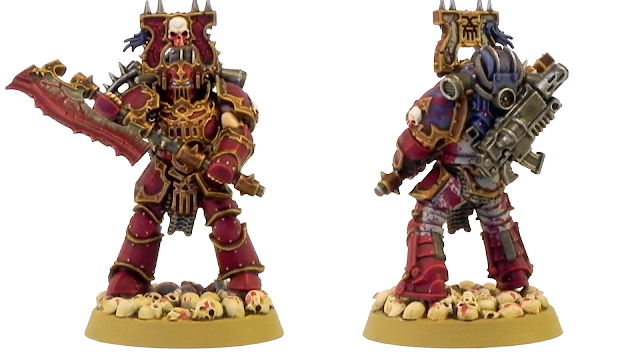 The Champion is armed with a Power Axe and a Combi-melta. The bits, as is the case with the majority of this Kill Team, are primarily from AoS Blood Warriors with some 40k (and 30k) stuff mixed in: legs, arms, backpacks, and so on. In this particular case the weapon, the arms, torso, helmet, and upper legs come from Blood Warriors, while the lower legs and backpack are Mk III bits from Burning of Prospero. One of the pauldrons is from the 2019 Chaos Space Marines box. 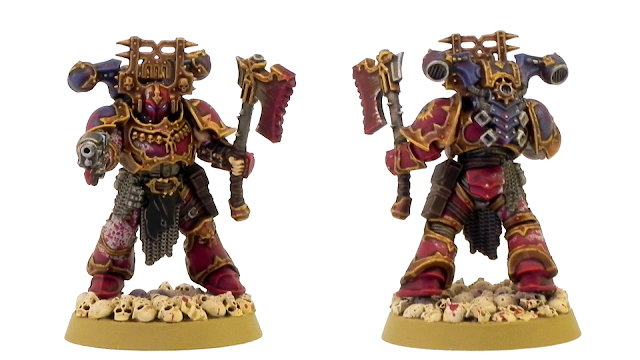 Moving on to Specialists, my Combat Specialist is a Khorne Berzerker Destroyer. He is armed with a chainaxe and a plasma pistol. Legs, lower torso, backpack, arms: 2019 CSM box. Upper torso, helmet, axe: AoS BW. 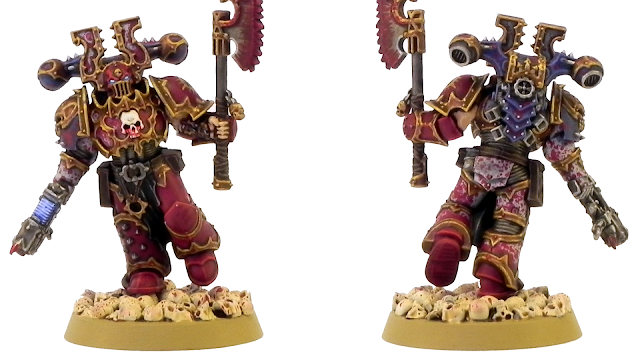 The Zealot Specialist is also a Destroyer, armed exactly like the one above. Selection of bits is also nearly identical to the one above in terms of sourcing. 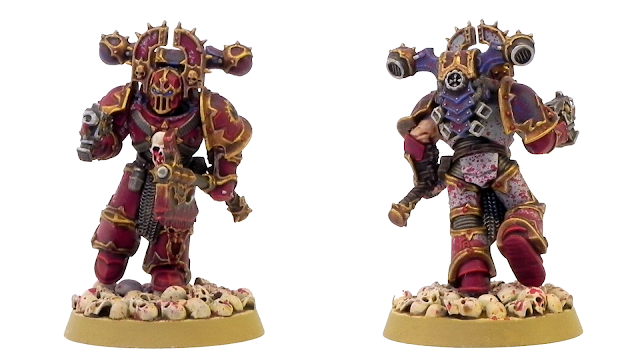 The Veteran Specialist may seem a bit less fancy, but he is still a force to be reckoned with. Legs, torso, right arm, bolt pistol, backpack: 2019 CSM box. Left arm with axe, helmet: AoS BW. The skull ornament on top of the backpack marks him out as a veteran.

The non-specialist Khorne Berzerker is the last model of this Kill Team. Bits were selected just like above.

As you can see, I used a significant portion of the Citadel Skulls box to make their bases. Also the AoS axes were suprisingly easy to modify so that they would pass as chainaxes. I just took a sharp hobby knife and cut into the edge area: one cut perpendicular, one cut diagonal, repeat until you run out of axe. :) If you are wondering how those axes are powered without a visible engine or power pack, I say they are powered by the hatred of the wielder and by the power of Khorne!

What I wanted to do in terms of painting was to follow the philosophy I had established with my Death Guard Kill Team, which I will show you in a later post if my gracious hosts allow. :) That is to show a Chaos legion with some of their original colors still visible under the corruption and ‘blessings’ of their chosen Chaos god. In the case of World Eaters I followed the fluff explanation of why their armor is deep red: it is simply the blood of their victims.

To begin with, I undercoated all models with Grey Seer. Then, following the pre-heresy color scheme of World Eaters, I painted their pauldrons and backpack with Ultramarine Blue contrast paint (two layers to ensure even coverage) and Apothecary White all over the rest of the armor. At the same time the bases were painted with Skeleton Horde.

To add some definition I drybrushed the armor with White Scar. A quite heavy drybrush of Pallid Wych Flesh was applied to the skulls on the base. The next step was to get some of that rich red with a specific pattern in mind. I took Khorne Red, diluted it with water quite significantly, took an old brush and used it to achieve the splatter effect, not sure what that technique is called. Basically you take a brush loaded with paint in one hand, and a hard object in the other, in my case part of a plastic sprue. While being above the model, you run the brush across the hard object and on the other side, drops of paint of random sizes fall onto the model. This was done heavily on the front of each model, moderately on the sides, and very sparingly on the back. The idea was, most enemies would die (and spray blood everywhere) while being in front of those Berzerkers. Then I applied a regular layer of Khorne Red in the front where I wanted larger areas of red.

What followed was relatively straightforward, that is an all-over wash of Carroburg Crimson and an edge highlight of Evil Sunz Scarlet. And that was it for the red armor. All brass trim was painted with Balthasar Gold, shaded with Agrax Earthshade, and edge highlighted with Liberator Gold. There was also an edge highlight of Calgar Blue on the blue parts that remained.

I would like to take this opportunity to thank Stahly and the whole Tale of Painters team for allowing me the chance to post here. I have been following this blog for years and found a lot of inspiration here. I hope you like the models above and I am hoping to show you some more in the future, if all goes well. :)