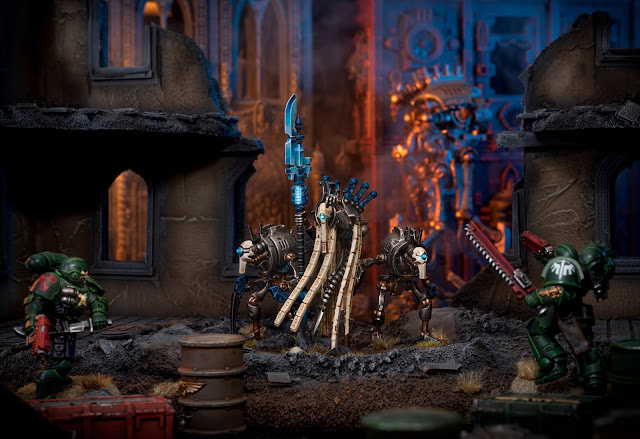 Today we’re going to take a closer look at the Necron Plasmancer and his subservient Cryptothralls backstory and how they perform on the battlfield. More after the jump.

Floating above the ground with it’s cyclopean head stooped low, the Plasmancer holds unfathomable power over alien energy. Plasmancer’s hypertechnology allows them to harness energy and use it as a weapon.

Flanked by his ever present Cryptothralls, these mindless automatons guard the Plasmancer from threats that would prevent the Necron’s work. Cryptothralls are coveted as status symbols amongst Cryptic hierarchy but they’re not to be under estimated, with bladed limbs they can disembowel with sweeping arcs or strip the flesh of enemies with gauss flayer technology from their single scouring eye. 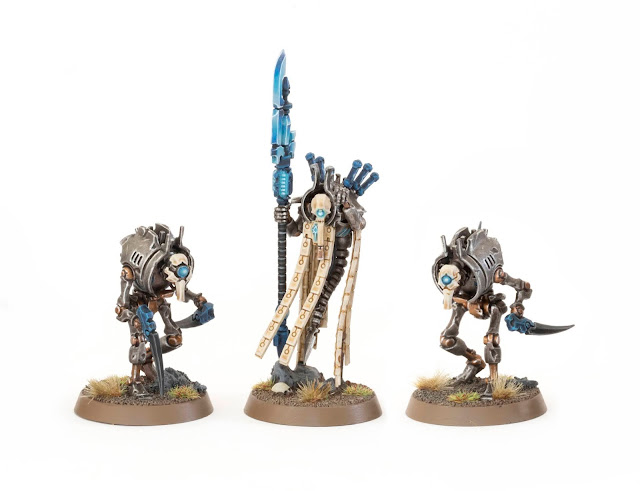 The Plasmancer’s stat line is the similar to a standard Necron Warrior apart from his 4 wounds. His Plasmic Lance is powerful with ranged and melee profiles. The ranged profile has a range of 18”  and is Assault D3, strength 7, AP-3 and 2 damage whilst the Melee profile is strength 4, AP-3 and 2 damage.

The Plasmancer can also dish out mortal wounds with his two abilities. Living Lightning works at the start of the fight phase, you roll a D6 for each enemy unit within 6” of the Plasmancer and on a 4+ they suffer a mortal wound. The other ability is called Harbinger of Destruction and at the end of your movement phase so long as you haven't Advanced or Fallen Back you select the nearest visible enemy unit within 18” and roll 3 dice. Each 4+ is a mortal wound on that unit.

These close combat attacks can be boosted with their ability called Systematic Vigour, when within 6” of a friendly Cryptek (Plasmancer has Cryptek keyword) their WS and BS become 3+ and their attacks double to 6. Their other ability is called Protectors. A Cryptek can not be targeted when within 3” of a Cryptothralls unit.


A Plasmancer is Power Level 4 and a unit of 2 Cryptothralls are Power level 2. The Cryptothralls have another ability called Bound Creation which means if you have a detachment with a Cryptek in then Cryptothralls don’t take up any detachement slots, so long as your army is battle forged. Otherwise they’re an Elite Choice and the Plasmancer is a HQ choice.