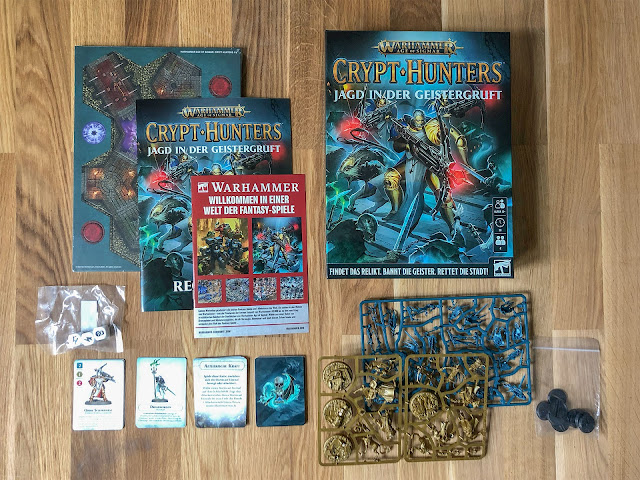 Today I'm gonna do an unboxing and review of Crypt Hunters, one of the games in the third wave of retail exclusive Warhammer board games, along with Space Marine Adventures: Rise of the Orks and Blitz Bowl Season 2. Crypt Hunters is a two-player game that pits three Stormcast and their trusty Gryph-hound against a wave of Chainrasps as they explore the Ten Thousand Tombs for an arcane relic. The game is essentially a "reskin" of the infamous Lost Patrol game, so let's see if this game improves the notoriously hard difficulty. 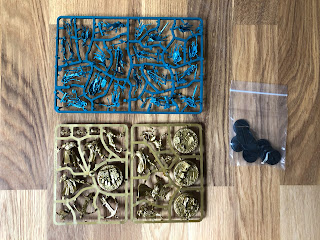 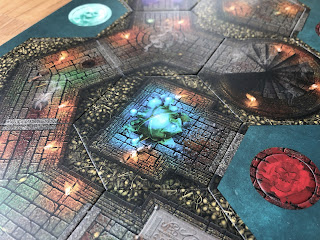 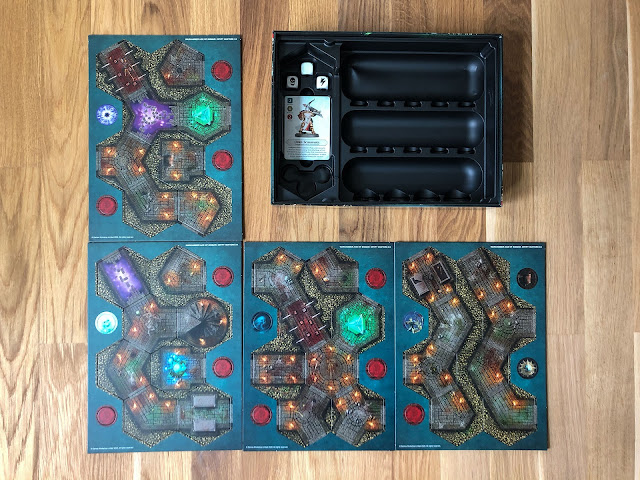 Features
The game comes in a high-quality glossy box with a pretty good plastic inlay that has empty spaces for all the models and components. Model-wise we have the existing easy-to-build sprues for three Stormcast Castigators plus a gryph-hound, and the existing sprue of ten Nighthaunt Chainghasts. The Stormcast are cast in gold plastic while the Nighthaunt are turquoise (with black bases), so even without paint, the models won't look too bad on the board. The miniatures aren't new but then all of the retail exclusive board games use existing models, so no surprises here. There are 32 nicely detailed labyrinth tiles made from a thick matte coated cardboard, three custom dice, 28 cards, 16 tokens, a 16-page rulebook, and a flyer about the Warhammer hobby. The presentation and design of the components are as good as you expect from a Games Workshop product.
9/10 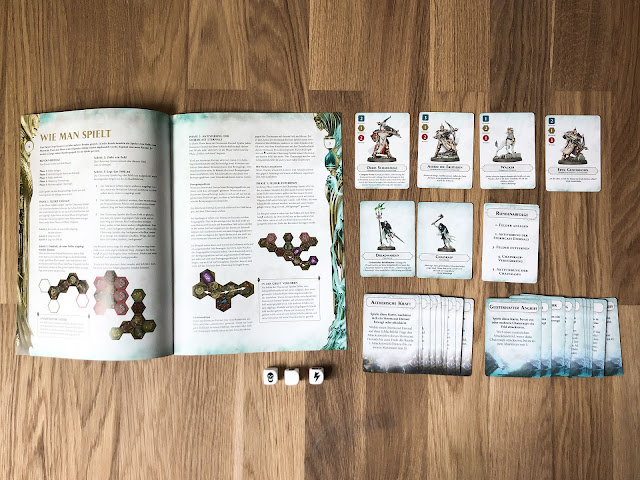 Accessibility
The 6 pages of basic rules are easy to follow for people who are slightly above a "Catan" level of board games, and there is a little bit of background introducing the Mortal Realms and both factions. Most board gamers will not be used to assemble their models, but the Stormcasts are easy to remove from the sprue and push-fit, though the Chainrasps are so delicate that they are prone to breaking in inexperienced hands. There is a website for the game with tutorial videos, and while there is no official gameplay tutorial video, there is a video by popular YouTube channel Watch it played.
8/10

The models are single pose without any options, except for a single Chainrasp that can be assembled as a Dreadwarden or not, though for the sake of the game you are supposed to assemble it as a Warden. The game starts with generating a custom map that is branching out by adding random tiles, so no game will exactly be the same. You'll need to find a wrench tile first, in order to access the Hyshian Illuminator relic to win the game, while fending off countless waves of respawning Chainrasps attacking the Stormcasts. There is also a stair tile that allows you to play a campaign game, though the term is a bit misleading. The campaign game is basically just a longer two-part game where you clear one map, enter the stair tile and start a new map to find the relic. On top of the "campaign" mode, there is a page of "achievements" and "burdens", things like win three games in a row or start the game with only one wound remaining that, once completed, you check off with your name and date, which I think is a pretty neat idea. So all in all, we have a varied gameplay thanks to the randomly generated map and some added replay value through modifiers, a proper campaign mode or single-player rules would have been nice though.
7/10

Fun factor
Crypt Hunters is based on the Lost Patrol game engine, but the game balance is improved in every way. It's still a challenge to beat the game, but the Stormcasts don't die as fast as the Scouts in Lost Patrol, and have three power cards to spice things up. The game has a really satisfying combination of tile placement, which can get very strategic once you get the hang of it and dice-driven combat. As games play fast, about 30 minutes (or a bit longer for the "campaign" two-part game), it doesn't feel grindy, and is a great filler or warm-up game. Like Space Hulk or similar games, being the Nighthaunt player feels a bit like acting as the game master for the Stormcast player, so I recommend to switch sides after each game to keep things fresh for both players.
9/10


Value
In Germany, the game had an RRP of 27,99 Euro, I bought it at the online shop of German book retail chain Thalia, which often have sales, discount codes and cashback programs available, so with a discount code, I only paid about 24 Euro with no additional shipping costs. The Castigators have an RRP of 12 Euro and the Chainrasps of 32,50 Euro, so even though the models aren't super exciting, it's a good saving for the models alone and you get a pretty good game on top. Unfortunately, these exclusive board games are only available in Germany at Thalia and Müller so far, and in the US at Barnes & Noble, so if you don't live in these regions, you'll likely have to miss out (or are bound to ebay resellers), which is a shame, as I enjoy GW's board game range a lot. I wonder why Games Workshop can't find more retail outlets in more markets as these board games are excellent gateway games.
10/10 for value, 3/10 for availability, so
6/10

Conclusion
One of my favourite games from GW's retail exclusive board game range so far. It plays fast, is challenging but rewarding, it's an improvement of Lost Patrol in all aspects.