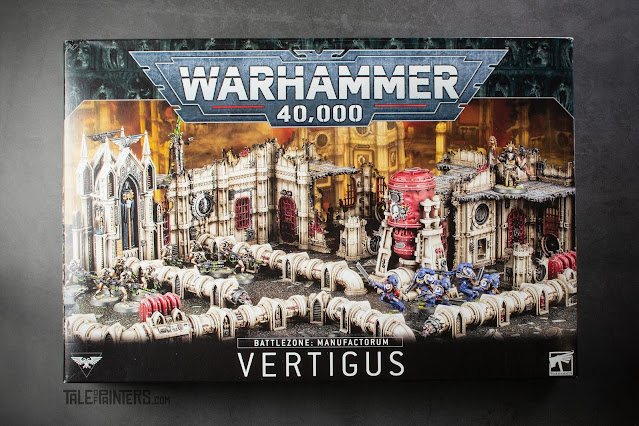 Today we check out the Manufactorum Vertigus Battlezone from Warhammer 40.000, a box set that features all the new Sector Munitorum terrain you know from the Warhammer 40.000 Command Edition starter set, PLUS a brand new terrain piece in form of the Auto-choral transmitter. Join us as we take a look at all the sprues and design features. 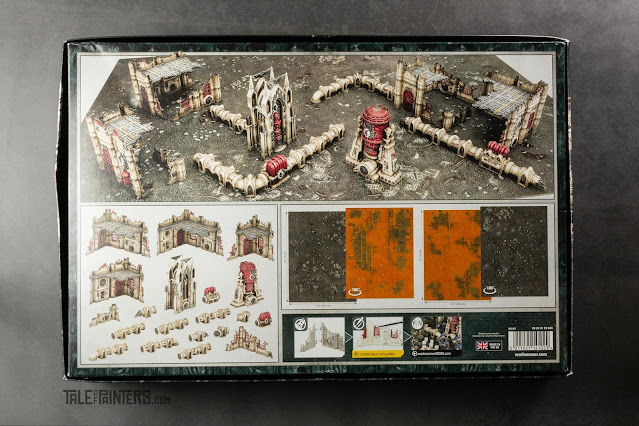 Design & Features
The large box comes with two 30 x 22 inch (Kill Team / Warcry) size game boards, and six sprues of the new "Manufactorum" style scenery, enough for Combat Patrol and Incursion level games. You basically get double the amount of what you find in the Warhammer 40.000 Command Edition starter set or the Sector Munitorum Battlefield Expansion set. Two game boards instead of one, four sprues of ruins instead of two, two copies of the new thermo pipes sprue, you get my drift. But instead of second Thermo exchanger shrine, you get a new, exclusive sprue that builds the Auto-choral transmitter. Check out the back of the box for an overview of all the included pieces. 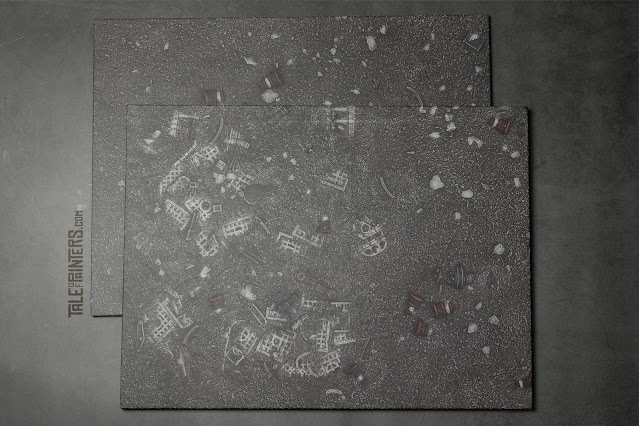 The boards are folded twice, made from thick cardboard with a matt finish, the same style as you know from Kill Team or Warcry. They are exactly the same boards as in the Manufactorum Battlefield set (which means that one of the boards is also the same as the one from the Command Edition starter set and Battlefield Expansion set). Would have been sweetl to get unique boards for the people who already own these sets, but they still combine nicely as the repetition isn't that obvious. One board side has a dark grey wasteland with a lot of rubble and even a couple of buried Ultramarines Primaris armour pieces, the other side depicts a Martian forge world with red sand. As usual, these graphics aren't computer-generated but reproduction of real boards, which looks as fantastic as usual. 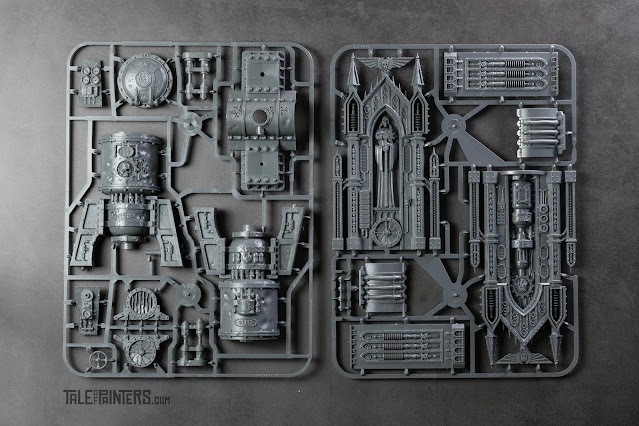 You'll probably want to get the set for the exclusive Auto-choral transmitter, a statuesque piece full of Imperial grandeur. It's a surprisingly large piece, standing 6.5 inches tall. The Thermo exchanger shrine is also a rather tall structure, almost as tall as the transmitter. It is connectable with the included thermo pipes, as well as the older Promethium relay pipes and Thermic plasma conduits. 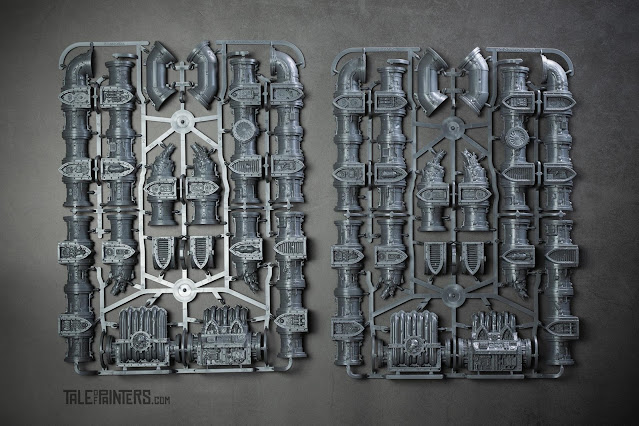 Each thermo pipes sprue features seven pieces: two broken ends, a console, two straight pipes, and two straight pipes that lead into the ground. With two sprues you get 14 pieces in total. Unlike the Thermic plasma conduits, the feet aren't separate, so they can't be stacked or built vertically. However, the gothic arches look pretty cool and very imperial. 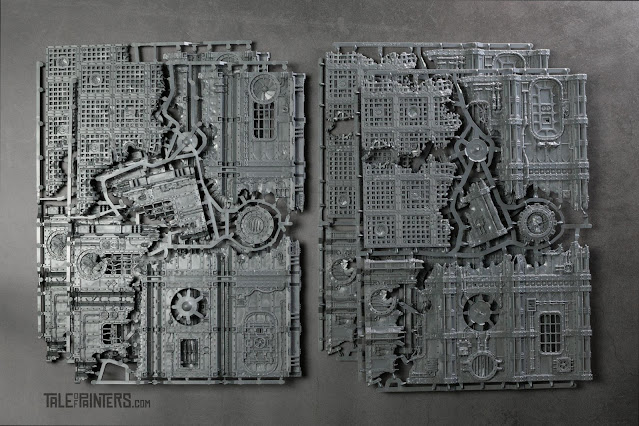 For the ruins, you get two copies of two different sprues. Every two sprues assemble either a Storage Fane and Sub-cloister, or a larger Engine shed. The ruins are based on the same proportions as the Sector Imperialis ruins, each story 6 inches tall. They provide a nice, more AdMech counterpart to the more cathedral-like Sector Imperialis ruins. Some wall sections can be connected to the thermo pipes, as well as to any of the two older pipe kits from Games Workshop. 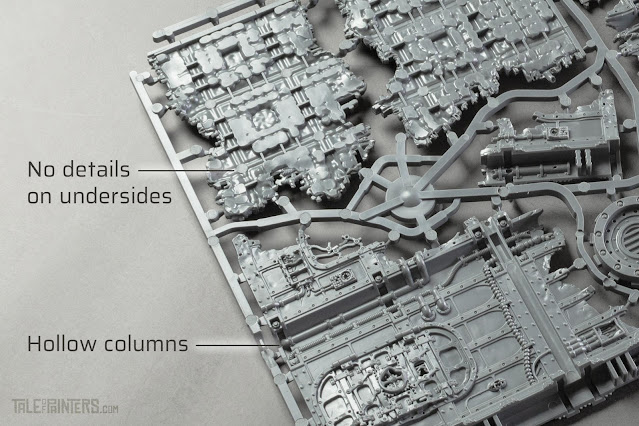 The design team cut a couple of corners to squeeze the ruins into as few sprues as possible. There is little modularity, as each wall section comes as a single piece. The columns aren't two-piece like on the Sector Imperialis buildings, but hollow from the inside. Most annoying are the undersides of the floor sections, they have been left featureless, which looks pretty bad. I wonder why they did that, as they designed the floors of the Sector Imperialis buildings with details on both sides.
Nevertheless, all terrain pieces are packed with little details like rivets and dents, the castings are sharp and crisp. The box says these sprues are made in the UK, unlike most other terrain kits that are usually produced in China.
7/10
Options
Assembly options are limited, as the Munitorum terrain pieces are less modular than the buildings of the Sector Imperialis range. All wall panels are single-piece, so you can only switch the left and right sides, plus the connectors don't fit Sector Imperialis buildings without modification. The Thermo exchange shrine and the Auto-choral transmitter don't have any options, though the hatch on top of the exchange shrine can be exchanged with several parts from the Alchomite Stack kit. The thermo pipes can be assembled in various configurations thanks to the separate corner pieces and broken ends, but unlike the Thermic plasma conduits, the feet aren't separate, so you can't stack them or assemble vertically.
4/10
Accessibility
The models come on plain grey plastic sprues. It would have been cool if they would have used coloured plastic like they did with the Kill Team releases, a darker grey would have matched the game boards well. All models are push-fit and can be assembled easily by beginners with just a pair of cutters. I recommend removing the pegs when you glue them, this way the pieces will fit more flush which helps to avoid any unsightly seams. Mould lines are present, as often as possible they have been put at the edges where they are hardly noticeable, but on the ruins and especially the window grates you have a lot of fiddly areas to clean up.
6/10

Fun factor
9th Edition introduced more depth when it comes to terrain, with datasheets for specific terrain configurations. There is a set of datasheet cards available for the Sector Munitorum terrain, RRP is 20 Euro / £15, would have been nice to include them in this box like they did with the Ravaged Lands and Kill Zone expansions for Warcry and Kill Team. Modelling and painting wise, the models assemble fast and are easy to paint, as all the little details and rivets will drybrush very well.
8/10
Value
RRP is 120 Euro / £90, and you get double the amount of sprues and boards than in the Sector Munitorum Battlezone expansion set, which is 70 Euro / £55. It's also the double amount of terrain and boards as in the Command Edition starter set, which is 130 Euro / £105, but then the starter set comes with a small-sized rulebook and all the Necrons and Space Marines. So all in all, I think the value is not too bad for the sheer amount of stuff you get, especially as this set is widely available from independent retailers like our partner shops Wayland Games and Element Games at a discount. It's just a bummer that you need to buy the datasheet cards separately.
7/10
Conclusion
Want to kickstart your terrain collection with a couple of the new easy to build Sector Munitorum terrain and enough boards for Combat Patrol and Incursion level games? Add in an exclusive terrain feature, then this set is for you.
7/10
Did you found this post helpful? Here is how you can return the favour: Support Tale of Painters by ordering your next hobby purchases at Wayland Games by clicking here or at Element Games by clicking here. Or send us a small donation with Paypal, buy us a coffee on Ko-fi or become a patron on Patreon for exclusive sneak peeks and extra content. Thank you very much, your support will help us covering our monthly costs and funding future projects.